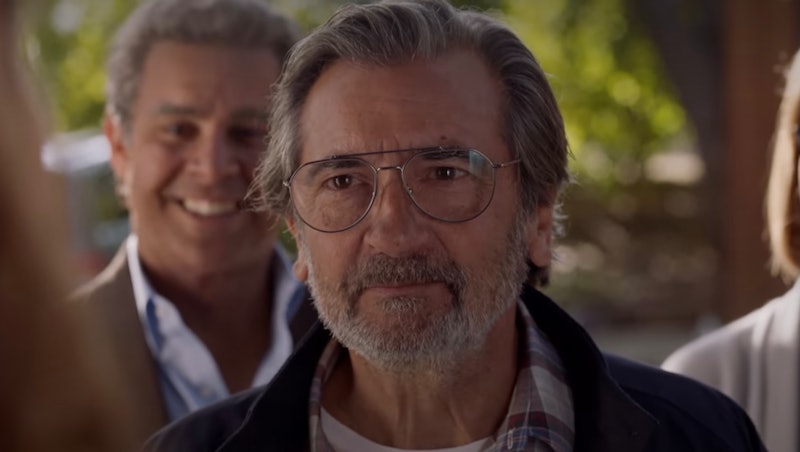 Ever since eagle-eyed viewers spotted Uncle Nicky wearing a wedding band in a This Is Us flash-forward, fans have come up with plenty of theories about who he marries. When the scene initially aired in Season 4, even actor Griffin Dunne, who plays present-day Uncle Nicky, had no idea who his character winds up with.

“I know as much as you do and I had the same observation you did,” he told People in March 2021. “I can’t tell you because I don’t know who I’m married to.”

Since then, the show has at least narrowed down the timeline. Just prior to the Season 5 reveal that Kate (Chrissy Metz) apparently marries her coworker Phillip (Chris Geere), Nicky was shown rushing down a hallway explaining that he was late to their ceremony because his wife “wanted stockings.” So that means he would’ve had to have gotten married less than five years into the future, which is when Kate’s wedding takes place.

With that in mind, fans have narrowed down their list of Nicky’s possible wives to these three characters.

Perhaps the most obvious answer is Nicky’s long-lost (and maybe only) love Sally Brooks (Genevieve Angelson). As Season 5 showed, a young Nicky (Michael Angarano) met Sally at a vet clinic in the late 1960s and began to spark a romance. However, the two never got a chance to develop their relationship because Nicky stood her up for a road trip to California in order to protect his mother from his abusive father. At the outset of Season 6, Nicky was Facebook-stalking Sally, with whom it seems he’ll finally reunite in the Jan. 11 episode.

A majority of fans believe the pair will reignite their spark, leading to an eventual marriage. Neither confirming nor denying that theory, This Is Us creator Dan Fogelman told Entertainment Weekly that the Sally reunion will mean “everything” for Nicky moving forward. “The end of this episode is really important,” he teased.

It was initially unclear if Cassidy Sharp (Jennifer Morrison) was meant to be a love interest for Nicky or Kevin (Justin Hartley), but over time, it’s begun to seem like the answer is neither. Many viewers seem to prefer Nicky’s father-daughter-type relationship with Cassidy, who’s been one of the few people he’s been able to count on. In Season 5, she helped him navigate his trip to Los Angeles to meet Kevin’s twins. And once on the West Coast, Nicky turned to Cassidy to calm him down during a panicked 4 a.m. phone call. Still, she hasn’t been fully ruled out of the running.

“Nothing is ever quite so simple with Nicky,” Dunne told People. “He’s an overthinker and highly neurotic, and I think he was like that before he went to the war. As we see with Angarano’s Nicky turning down an opportunity that could've been wonderful, he turned down a great love affair and going to Woodstock to see Hendrix. All that self-doubt, overthinking, neurosis, and self-loathing, as Cassidy says Nicky has, I think he's always going to be grappling with that.”

Because Nicky was sitting at Rebecca’s bedside when we first saw his wedding ring, many quickly jumped to the conclusion that the two had gotten married at some point. We now know that Rebecca, who’s still married to Miguel (Jon Huertas) in the present timeline, is experiencing cognitive decline, so it’s unlikely she gets remarried in the future. But the Pearson family matriarch remains on fans’ lists of possibilities in a more symbolic sense.

Pointing to Rebecca’s progressing Alzheimer’s disease, some have predicted that she comes to believe Nicky is Jack (Milo Ventimiglia), her late husband and his older brother. In a show of compassion, Nicky could agree to go along with it and even wear his brother’s ring — though this theory hinges on Nicky’s comments to Kate about his wife being a red herring.

Whoever Nicky’s wife ends up being, we’ll find out soon enough: This Is Us is in its final season, and Fogelman teased that the Jan. 11 episode will answer some of the questions he’s been asked about what’s going on in the future.

More like this
Linda Ronstadt’s “Long Long Time” Plays A Pivotal Role In The Last Of Us
By Brad Witter
'Stranger Things' Finn Wolfhard Is “Proud” Of Noah Schnapp For Coming Out
By Sophie McEvoy
Twitter Is Burning As Phoebe Dynevor Reveals Daphne’s 'Bridgerton' Exit
By Sophie McEvoy
Michael B. Jordan Tackled His "Public Breakup" With Lori Harvey On 'SNL'
By Brad Witter
Get Even More From Bustle — Sign Up For The Newsletter
From hair trends to relationship advice, our daily newsletter has everything you need to sound like a person who’s on TikTok, even if you aren’t.