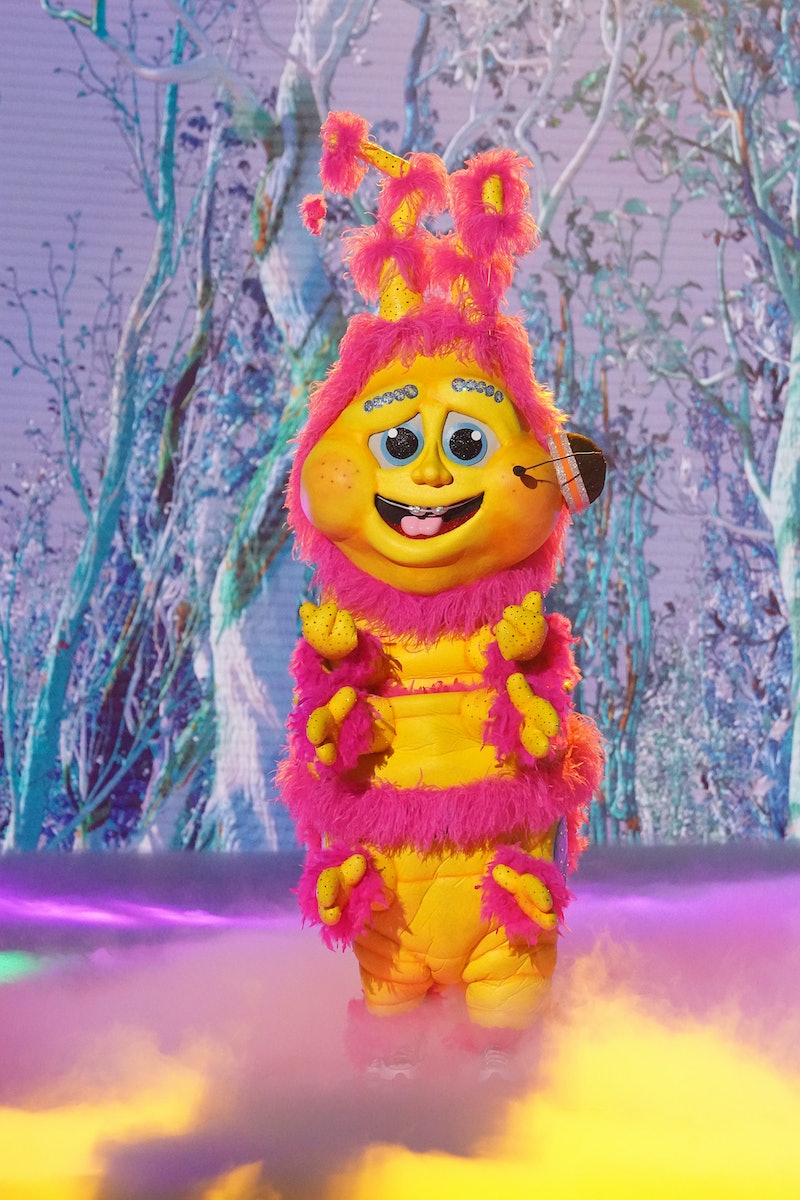 In May, 98 Degrees’ Nick Lachey won The Masked Singer. And another boy bander may take home the trophy in Season 6. “This definitely touched my heart strings, and to me, this seemed like a frontrunner performance, you guys,” Jenny McCarthy said after the Caterpillar sang his first song in the Oct. 13 episode.

Dressed in a colorful pink and yellow suit, the Caterpillar appeared as the last performer of Group B. He immediately blew the judges away with his soulful rendition of Beyoncé’s “If I Were A Boy,” even bringing Nicole Scherzinger to tears. Because of his wide vocal range and ability to hit the high notes, the judges immediately guessed that Caterpillar is AJ McLean from Backstreet Boys or pop singer Aaron Carter. (Carter was never in a boy band himself, but is the younger brother of Backstreet Boys’ lead singer Nick Carter.)

It’s hard to know if either of these guesses are correct based on only one performance, but they do line up with some of the hints Caterpillar gave. In his first clue package, Caterpillar said he chose the costume because his “life has been all about metamorphosis.” He added that “things weren’t always great at home” growing up, so he rebelled a lot. He left home at a young age and experienced homelessness at some point. After stealing to make ends meet, he wound up in jail. Though people told him that “he’d never amount to anything,” he eventually found fame. A visual clue was a picture of the Great Lakes, as well as a basketball.

Robin Thicke surmised that the basketball could stand for “BB” — as in, Backstreet Boys. “The personality, the sense of humor, and the voice” led him to guess first Howie Dorough, then AJ McLean. McCarthy pointed out that AJ McLean was known as the “bad boy” of Backstreet Boys, but McLean has never been arrested like Caterpillar. He did struggle for years with substance misuse, leading him to enter rehab in the early aughts. The Backstreet Boy member who has been arrested is Nick Carter, who allegedly got into a bar fight in Florida in 2002. While this would align more with Caterpillar’s story, Carter has already been on The Masked Singer as the Crocodile in Season 4. But that still leaves Nick Carter’s brother Aaron as an option. Like Ken Jeong pointed out, Carter was arrested in 2017 for suspicion of driving under the influence.

Another hint for Caterpillar appeared in a Sept. 12 tweet from the official Masked Singer account. “You may not know who I am yet, but I’d say a Taylor would. Especially this one,” he said, showing a photo of Taylor Swift. Is it possible that Caterpillar is a boy bander that Swift dated, like Joe Jonas? Or perhaps it could be her friend Ed Sheeran, who experienced bouts of homelessness before becoming famous. It’s still not clear, and based on Caterpillar’s debut appearance, it may be a while before we know for sure who’s hiding under the mask.

More like this
'Boiling Point's TV Sequel Is Set To Deliver A “Rollercoaster Of Emotions”
By Catharina Cheung and Sophie McEvoy
Grammys Host Trevor Noah Made Adele's Dream Of Meeting The Rock Come True
By Brad Witter
'The Last Of Us' Episode Schedule Competes With The Super Bowl & Oscars
By Brad Witter
Pedro Pascal Barely Got Through The "Lisa From Temecula" 'SNL' Sketch
By Stephanie Topacio Long
Get Even More From Bustle — Sign Up For The Newsletter
From hair trends to relationship advice, our daily newsletter has everything you need to sound like a person who’s on TikTok, even if you aren’t.