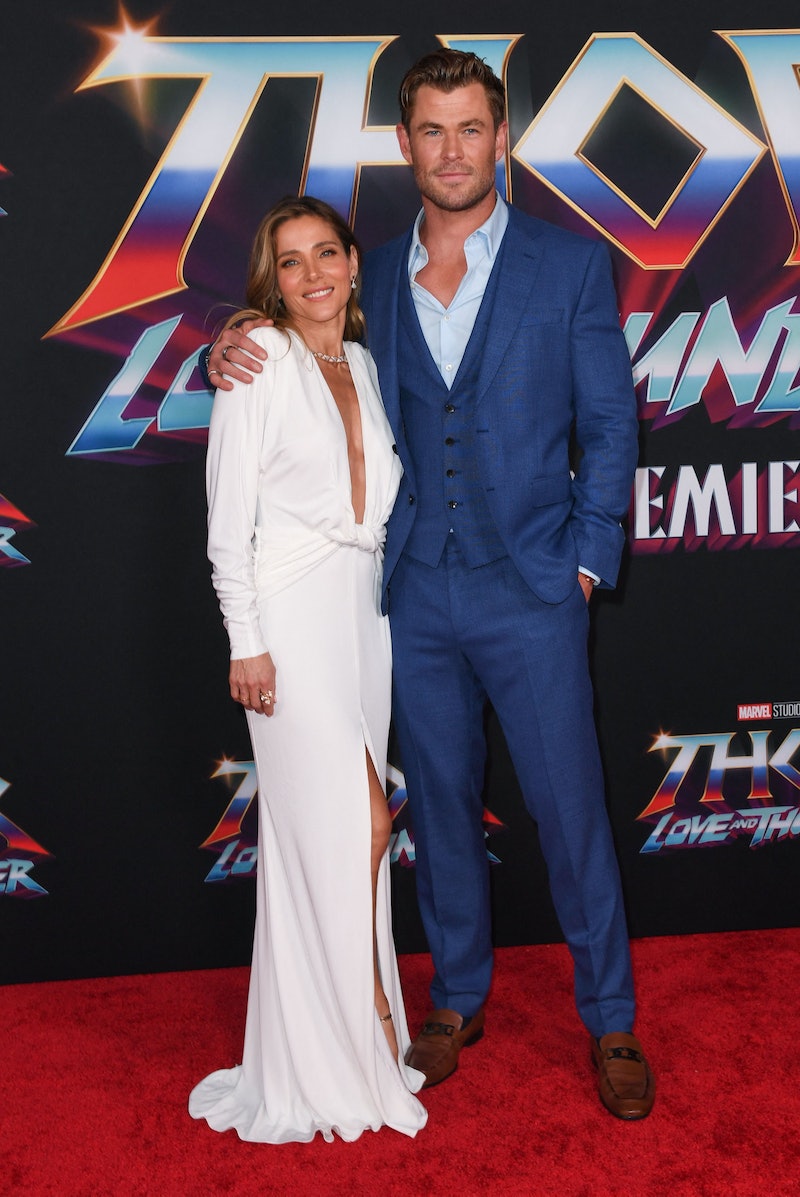 It’s been nearly a decade since viewers last saw Thor and Jane as a couple in 2013’s Thor: The Dark World — which is part of what makes Natalie Portman’s return in Thor: Love and Thunder so exciting. Though trailers didn’t confirm whether or not the on-screen exes would reunite romantically, it was always going to be a big question for Thor and Jane shippers — especially since the movie is called, you know, *Love* and Thunder.

And as for life beyond the Marvel Cinematic Universe? We know that Thor has always carried a torch for Jane, but who is Chris Hemsworth dating in real life? Well, no one — but don’t shoot your shot just yet. Hemsworth doesn’t have a girlfriend because he has a wife: the Spanish model and actor Elsa Pataky.

As Pataky told Vogue Australia, the pair met (and married!) in 2010 — and they sort of seemed meant to be, judging by the Thor tattoo she got as a teenager. “It is shocking how things in life [turn out],” she told the magazine. “I just liked that [symbol] and the legend he had was so beautiful and I wanted to keep it.”

Thor and the couple’s first pregnancy came the next year — which, as you might guess, was a bit of a whirlwind. “We did everything very quickly — I don’t know how we survived as a couple,” Pataky told Vogue. “We were married and then a year after we had kids. It puts a lot of pressure on a marriage, but we came out good because there is a lot of love between us and we are very strong personalities but love each other so much. We make it work.”

As Hemsworth put it to GQ Australia, the couple became stronger as time went on. “My wife and I fell in love, had kids, didn’t really see each other for a few years, then fell back in love,” he said in 2017. “In terms of work, she’s certainly given up more than I have. She’d like me to step back and be at home with the kids more, and of course, I want that too. But I feel like I’m at this crucial point in my career — I’ve just got to set up for longevity or I’ll slip off.”

Fortunately, Hemsworth’s busy schedule as one of the MCU’s biggest heroes (and, now, the first to get a fourth solo movie) hasn’t always kept him away from the family, which includes a daughter, India, and twin sons Tristan and Sasha. In Thor: The Dark World, Pataky got to play Jane for the film’s final kiss scene — Portman herself wasn’t available during reshoots, so Pataky (with the help of some crafty filming angles) filled in.

Starring in Thor movies is actually becoming somewhat of a family tradition, it seems. As Hemsworth recently revealed to Kevin McCarthy, his sons portray a younger Thor in Love and Thunder, while his daughter plays a character named Love.

“They really wanted to be in it ... it felt sort of like a one-off, fun, family experience, you know? I don’t want them to now go and be child stars and actors,” Hemsworth said. “It was just a special sort of experience we all had, and I loved it. They had a great time.”

More like this
New Details About Jeremy Renner's Snowplow Accident Reveal The Actor's Intentions
By Sam Ramsden
The 'Scream 6' Trailer Shows Off Hayden Panettiere's Return & Ghostface In NYC
By Jack Irvin and Jake Viswanath
Twitter Is Overjoyed By Angela Bassett’s Record-Making Oscar Nomination
By Maxine Harrison
'Friends' Star Maggie Wheeler Offers Support To Matthew Perry After Reading His Memoir
By Alyssa Lapid
Get Even More From Bustle — Sign Up For The Newsletter
From hair trends to relationship advice, our daily newsletter has everything you need to sound like a person who’s on TikTok, even if you aren’t.