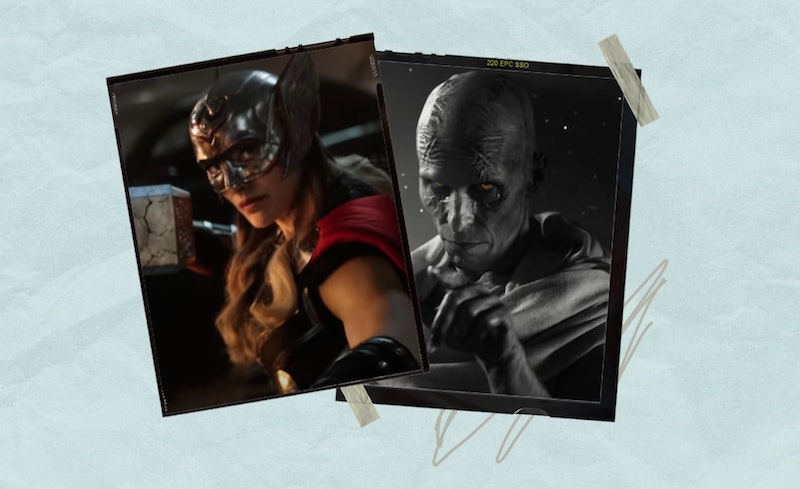 Marvel Phase 4 might have been dominated by Loki on Disney+, but the God of Mischief’s brother has his own project to look forward to — Thor: Love and Thunder. The film is set to follow in the vibrant, playful direction established by director Taika Waititi in 2017’s Thor: Ragnarok. That entry was so invigorating that it apparently gave series star Chris Hemsworth his real-life “I’ll have another” moment. “I was sort of exhausted of what I’d been doing and a little sort of underwhelmed by what I was putting out there,” he told Yahoo in 2019, describing Ragnarok as “liberating and freeing ... to sort of breakaway who the character was prior.”

Now, Hemsworth is happy to “play this character for as long as anyone would let me,” as he told This Morning. Love and Thunder is a follow-up on that promise and the first time we’ve seen Thor since the Avengers defeated Thanos and he elected to travel with the Guardians for a break from Earth, aka Midgard. With the official trailer finally out and a summer release date set, the excitement of seeing Thor and Valkyrie (Tessa Thompson) again — plus some very familiar faces from the past — feels more real than ever. Here is everything you need to know about Thor: Love and Thunder so far, including Gorr, its creepy new villain.

On May 23, Marvel dropped the Thor: Love and Thunder trailer. It includes the first look at the villain Gorr the God Butcher. Played by Christian Bale, the eerie, breathy Gorr is the anti-immortal bad guy whose mission is to destroy the gods. “The only ones gods care about is themselves,” Gorr laments, later promising, “So this is my vow: All gods will die.”

As Waititi teased, the trailer has comedic moments including a reference to Thor’s dadbod (a nod to his Endgame physique) and Zeus accidentally undressing Thor down to his birthday suit. The trailer also teases a potential spark between ex-lovers Jane (Natalie Portman) and Thor. He’s obviously still pining for her, though he’s also completely awkward about his feelings. Who’d have thought that the tough god has zero game?

According to Hemsworth, filming began in Australia in January 2021 and wrapped on June 1 — announced with an Instagram photo of the Thor star next to Waititi, who also plays the ever-laidback Korg. The image shows Thor sporting a tank top, jeans, and some seriously ripped arms.

In the post, Hemsworth promised a “crazy off the wall funny” film that “might also pull a heart string or two.” Waititi also teased a thrilling ride, writing in his own post that Love and Thunder “is the craziest thing I’ve ever done.” Daily Mail also shared photos of Hemsworth on set in an 1980s-esque workout look, complete with sweatbands.

Last time fans checked in with Thor in Avengers: Endgame, he had appointed Valkyrie as the King of New Asgard before heading off to join the Guardians of the Galaxy. A tweet from Guardians writer and director James Gunn seemed to acknowledge that the team of heroes would appear in the new Thor film, and set photos shared by Daily Mail further confirmed the crossover.

“The film finds Thor (Chris Hemsworth) on a journey unlike anything he’s ever faced — a quest for inner peace. But his retirement is interrupted by a galactic killer known as Gorr the God Butcher (Christian Bale), who seeks the extinction of the gods. To combat the threat, Thor enlists the help of King Valkyrie (Tessa Thompson), Korg (Taika Waititi) and ex-girlfriend Jane Foster (Natalie Portman), who – to Thor’s surprise – inexplicably wields his magical hammer, Mjolnir, as the Mighty Thor. Together, they embark upon a harrowing cosmic adventure to uncover the mystery of the God Butcher’s vengeance and stop him before it’s too late.”

We also know that Waititi pulled inspiration from The Mighty Thor comics storyline by Jason Aaron, which ran from 2015 to 2018. “It’s incredible and full of emotion and love and thunder,” he said at San Diego Comic-Con in 2019. “And it introduces, for the first time, a female Thor."

Speaking of “female Thor”... Portman, who portrayed scientist Jane Foster in the first two Thor films, will return in Love and Thunder to take on the interesting new era of her character.

In addition to the return of Hemsworth, Thompson, Portman, and Waititi, Jaimie Alexander also returns to the Thor franchise as the Asgardian warrior Lady Sif. As for the villain, Love and Thunder will feature Bale as Gorr the God Butcher. Speaking about the new big bad to EW, Waititi said, “I think personally, he’s probably one of the best villains that's Marvel’s had in their films.”

Based on set photos shared by the Daily Mail, at least a couple of the Guardians, including Chris Pratt as Peter Quill and Karen Gillan as Nebula, will round out the cast. The trailer confirmed that the intergalactic gang is back with even more Guardians making cameos, including Dave Bautista as Drax, Vin Diesel as Groot, and Pom Klementieff as Mantis. Meanwhile, Rocket, voiced by Bradley Cooper, is in the IMDB credits.

Aside from Norse gods, the Greek god Zeus also makes an appearance and he’s played by Russell Crowe. It’s unclear how much Zeus will participate in the fight against Gorr, but Crowe gets top billing. Following in the footsteps of the beloved Ragnarok, there have also been a handful of celebrity cameos announced, but let’s not spoil all the fun before the premiere.

The biggest name missing from the cast lineup, of course, is Tom Hiddleston as Loki. He sacrificed himself in the Asgardians’ fight with Thanos in Infinity War — and even though Loki has a penchant for pretending to die, this one seemed pretty real. Save for some kind of Multiversal magic, which definitely can’t be ruled out, as the end of Loki tells us), the God of Mischief will probably not appear in the fourth Thor movie.

Before the trailer came out on May 23, Marvel released a first teaser in April for Thor: Love and Thunder, giving a glimpse into Thor’s psyche and his becoming a “humble tool for peace.” As Thor carves out his own path, he declares, “My super-hero-ing days are over.” He might not stay that way for long, as they have Gorr the God Butcher to deal with. The teaser culminates in a powerful role-swap, with Portman’s Jane finally wielding the hammer, much to Thor’s surprise.

The fourth Thor installment follows a handful of equally anticipated MCU movies, including Spider-Man: No Way Home and Doctor Strange in the Multiverse of Madness.

This post will be updated with additional details as more information on Thor: Love and Thunder becomes available.

More like this
Netflix Shut Down 'Bridgerton' S3 Rumours About A “Very Dark” Storyline
By Bustle
'The Queen’s Gambit' Season 2 Tweet Wasn’t From Anya Taylor-Joy
By Mary Kate McGrath, Jack Irvin and Grace Wehniainen
Anne Hathaway Shared A "Thrilling" 'Princess Diaries 3' Update
By Darshita Goyal
Twitter Is Overjoyed By Angela Bassett’s Record-Making Oscar Nomination
By Maxine Harrison
Get Even More From Bustle — Sign Up For The Newsletter
From hair trends to relationship advice, our daily newsletter has everything you need to sound like a person who’s on TikTok, even if you aren’t.