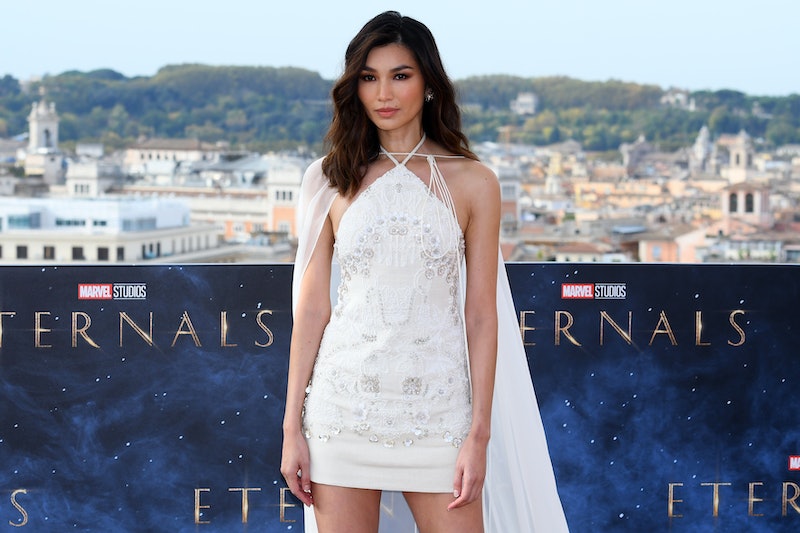 Gemma Chan’s star has been on the rise since her standout turn in the 2018 rom-com Crazy Rich Asians, and now she’s leading a superhero group in Marvel’s Eternals. Naturally, her big role in the Marvel Cinematic Universe has fans interested in who Chan is dating, and it turns out that she didn’t stray too far from the MCU to find love. No, it’s not Eternals co-star Richard Madden, despite recent rumors sparked by their red carpet chemistry. Chan has been dating Mamma Mia! star Dominic Cooper for more than three years, confirming their relationship in September 2018.

Cooper is also an actor in the MCU, portraying a younger version of Howard Stark in the Captain America: The First Avenger movie in 2011 and again in the Agent Carter TV series in 2015 and 2016. The couple made their public debut in December 2018 at the British Fashion Awards, but since then, they have kept their relationship very low-key, aside from the occasional Instagram appearance. They didn’t even walk the red carpet together at the 2021 Met Gala.

And don’t expect Chan to open up about her dating life. In a February interview with ELLE UK, the star explained that she chooses to keep things private. “Over 10 years, you learn the importance of privacy, what you choose to share and what you don’t,” she said. “When you start out, you don’t even know what is important to keep for yourself — I didn’t anyway — whereas now I think there are certain things that I absolutely know, ‘That’s mine and it’s private.’ For me, my comfort level is to have a clear distinction between what is for me and what I’m happy to talk about.”

In August, however, she did give a little insight on how she and Cooper kept busy during quarantine, telling British Vogue that they volunteered for Cook-19 and delivered meals to NHS frontline workers in London. “We were just the guys who turned up with the flapjacks and the food,” she said. “The porters would recognize us, but just in terms of, ‘Oh, it’s you guys – the food couriers who sometimes had stolen a sausage roll or two.’”

Prior to Cooper, the Eternals star dated Jack Whitehall for six years, from 2011 to 2017. The comedian has been candid about their relationship, saying that he “messed up” his chances of marrying her in an episode of his Netflix show Travels With My Father. However, their breakup seems to have been very amicable, if his jokes at a 2018 show are any indication. “You want to hate the person, that is a healthy way to end a relationship ... and she couldn’t even do that,” he said, according to Express. “I wanted her trampling my heart into the floor. She took my mum for tea to help my mum transition through the split. F*ck you with your generosity.”

While Chan and Cooper both have many projects in the pipeline, it doesn’t look like they’ll be taking their romance onscreen anytime soon. Cooper is set to star in the thriller Nightfall, where he’ll play a former rock star who gets accused of “the unthinkable” by a fan, as per The Hollywood Reporter. Meanwhile, Chan will appear in the Apple TV+ anthology series Extrapolations with Meryl Streep, and Olivia Wilde’s highly anticipated film Don’t Worry Darling alongside Florence Pugh and Harry Styles. She’s also still attached to planned sequels of Crazy Rich Asians.