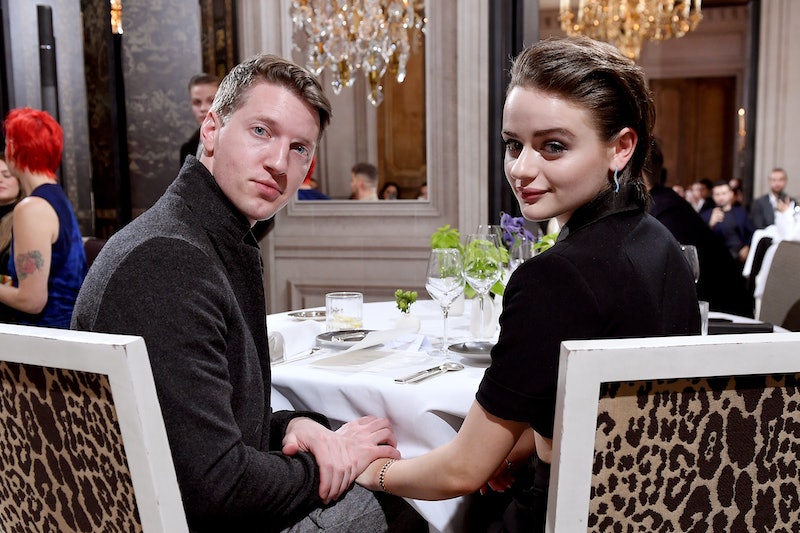 Though Joey King was once in a relationship with her Kissing Booth co-star and onscreen boyfriend Jacob Elordi, the pair split shortly before filming The Kissing Booth 2. Since then, King has been linked to director-slash-producer Steven Piet, and she just announced they’re engaged.

On March 1, King took to Instagram to announce the news with the sweetest caption. “I never knew happiness could be so powerful that it can take the air from your lungs, overwhelming every part of you that you can’t help but feel your eyes well from the undeniable joy,” she began. King went on to reveal Piet proposed on Feb. 2, and gushed that “hanging out with you forever sounds like a real dream”

Piet and King have been notoriously private about their romance, but it is known that they met while working together on the Hulu miniseries The Act, which starred King as Gypsy Rose Blanchard. As their relationship as gone on, the pair has become much more comfortable with being seen in public and posting about one another on Instagram — but still, details about Piet’s personal life are scarce.

Below, everything to know about Piet and King’s relationship, including the first time they were spotted in public.

King and Piet met while filming The Act.

It’s believed that the duo met while working on The Act, which Piet executive produced. He also directed two episodes, including the much-discussed finale. The Act received widespread critical acclaim, and earned King nominations for awards at the Emmys, Golden Globes, and Screen Actors Guild Awards.

The pair was first spotted at a Harry Potter screening.

King and Piet were first seen in public in the summer of 2019, at a Cinespia screening of Harry Potter and the Chamber of Secrets at the Hollywood Forever Cemetery in Los Angeles. The couple shared a blanket with King’s sisters, Hunter and Kelli, and their dates. An observer at the screening told E! News: “They were very affectionate and were with her two sisters sitting watching the movie together. Joey and Steven cuddled the entire time and looked very happy together.”

Piet is a writer, director, and producer.

The Chicago native and Savannah College of Art and Design alum has worked on numerous television projects, in addition to his producing and directing credits on The Act. He’s directed numerous episodes of Syfy’s Channel Zero and USA Network’s Briarpatch, the latter which he also produced. On top of that, he directed and co-wrote the crime thriller Uncle John, which premiered at the 2015 SXSW Festival.

They went public with their relationship in December 2020.

The couple kept their relationship under wraps for at least a year and a half before they made it public on Instagram. King shared their first photo together on Dec. 26, 2020, which showed her and Piet embracing in front of a decorated Christmas tree. They’ve since posted multiple photos together on their respective profiles, most recently on July 30 for King’s 22nd birthday. (King also marked Piet’s birthday in May 2021 with a special post.)

More like this
RHOP’s Robyn Dixon Explained Why Juan Paid For Another Woman's Hotel Room
By Brad Witter
4 Surprising Celeb Throuples That Got The Internet Talking
By Sophie McEvoy
Michael B. Jordan Tackled His "Public Breakup" With Lori Harvey On 'SNL'
By Brad Witter
Who Is Pete Davidson Dating? He & Chase Sui Wonders Got Caught Kissing
By Jake Viswanath
Get Even More From Bustle — Sign Up For The Newsletter
From hair trends to relationship advice, our daily newsletter has everything you need to sound like a person who’s on TikTok, even if you aren’t.