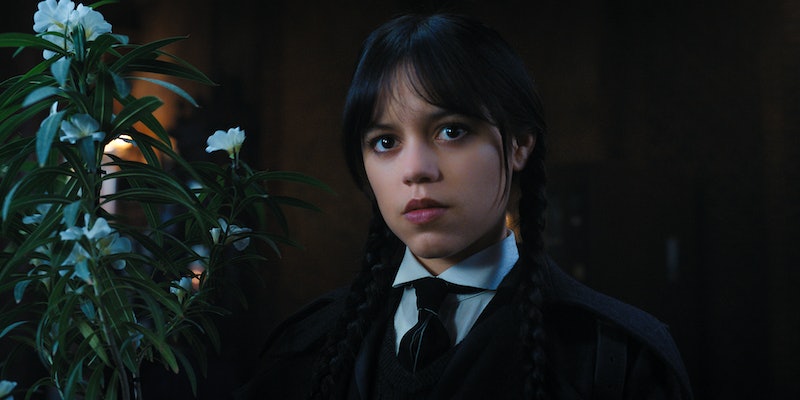 All throughout the debut season of Wednesday, which dropped on Nov. 23, a mysterious monster has been killing Jericho residents and taking their body parts as a trophy. That monster was revealed to be Tyler (Hunter Doohan), a Hyde, in the show’s season finale. However, he wasn’t acting alone.

To recap: Marilyn Thornhill (Christina Ricci) is actually Laurel Gates, a descendant of Joseph Crackstone who wanted to resurrect him and continue his mission of killing outcasts. She needed blood from Wednesday (Jenna Ortega) and flesh from the murder victims to bring Crackstone to life — and for that messy task, she enlisted Tyler’s help. She told him the truth about his family’s Hyde heritage and used that bombshell to persuade Tyler to assist in her quests against the outcasts.

Remember, as Wednesday learned in Episode 7, “the Hyde lays dormant until unleashed by a traumatic event or unlocked through chemical inducement or hypnosis,” which “causes the Hyde to develop an immediate bond with its liberator ... [and become] the willing instrument of whatever nefarious agenda this new master might propose.”

By the end of the finale, both Laurel and Tyler have been apprehended but not killed. In fact, the final moments of the episode see Tyler entering Hyde mode, perhaps signaling that he’ll continue to be a threat in Wednesday’s future.

In a Nov. 28 interview with Variety, showrunners Alfred Gough and Miles Millar opened up about the Wednesday finale cliffhangers — and why they maybe weren’t really “twists” at all.

“Thornhill was always the big bad,” Gough said. “She was the brains behind the whole operation. We actually thought when we cast Christina [Ricci], it was going to be such a frickin’ blinking red light over her. We were concerned that, ‘Oh, my God, are people just gonna guess this.’”

Millar agreed. “Obviously, this is our first whodunnit,” he said. (The filmmaking duo previously teamed up on The Shannara Chronicles.) “The idea of people guessing too soon, it’s like you think that she could be, but it’s so obvious, then it’s not. I think it’s like a dance of hopefully an audience guessing until the end.”

Some especially observant members of the audience did, indeed, guess correctly. As several Twitter users pointed out, tiny clues were there all along — like Tyler and Laurel Gates (then, under the guise of Marilyn Thornhill) chatting to the side at the Rave’N dance. You can check it out for yourself, shortly before the 30-minute mark in Episode 4, “Woe What a Night.”

Of course, as Wednesday herself puts it in the Wednesday finale, “not every thread has been tied up, nor every question answered.” She also wonders if Laurel Gates and Tyler aren’t merely “pawns” in some kind of larger mystery — a good hunch, as she receives a threatening text from someone who says they’re watching her. (And there are already plenty of theories about who that might be, ranging from Laurel Gates to Uncle Fester.)

Fortunately, Millar told Variety that he and Gough “have a pretty clear runway” about what the future of the show will look like, should it be renewed — and on Nov. 29, Wednesday broke a one-week viewership record previously held by Stranger Things Season 4. So, it seems very likely that there will be a Wednesday Season 2 to continue the spooky, sleuthing fun.

More like this
Netflix Shut Down 'Bridgerton' S3 Rumours About A “Very Dark” Storyline
By Bustle
'The Crown' Season 6 Has Suspended Filming "Out Of Respect" For The Queen's Death
By Bustle Staff
Ozzie’s Coming Out Scene With Kitty On 'That ’90s Show' Has Twitter Sobbing
By Brad Witter
The Mysterious Gunther Corporation From 'Gunther’s Millions' Has Dissolved
By Brad Witter
Get Even More From Bustle — Sign Up For The Newsletter
From hair trends to relationship advice, our daily newsletter has everything you need to sound like a person who’s on TikTok, even if you aren’t.