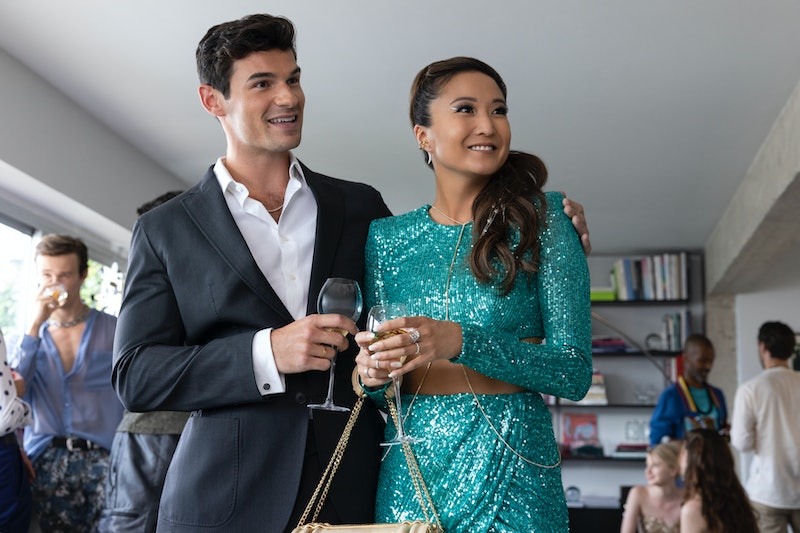 Emily isn’t the only one with relationship drama in Emily in Paris Season 3. While Mindy Chen’s (Ashley Park) singing career takes off in the latest season, her relationship with bandmate Benoit (Kevin Dias) hits the rocks. But all hope is not lost, as Mindy finds a new love interest in newcomer Nicolas de Leon, played by Paul Forman.

As Emily explains, Nicolas’ father owns the conglomerate JVMA, which is “home to almost every important luxury brand.” Nicolas is the youngest of three sons, and supposedly the most like his dad, “all the way down to his love of racing cars,” Emily says. JVMA does all their marketing in-house, but we later found out he’s keen to work with Sylvie’s new firm after seeing what they did with the Pierre Cadault brand.

Meanwhile, we learn that Nicolas and Mindy go way back, and went to boarding school together. They reconnect at a party and hit it off pretty quickly. “It’s nice to talk to someone you don’t have to explain yourself to,” he tells her. Though he was three years ahead of her, he clearly remembers her, and sets out to woo her now that they’re older. Here’s everything to know about the actor who plays Nicolas.

Paul Forman is an actor and model based out of London. In a Chromatica Magazine article, de Leon explained that he starting acting in plays at university. He had a feeling of “being an outcast,” he said, and when he was 19, he wanted to “live and experience life and emotions in its purest forms.”

“I often say that we act more in our everyday life than we do on a stage. There are no rules there, no egos telling us what we can and cannot do,” he said. He said that breaking into acting was the “single hardest challenge” of his life, and he still doesn’t consider himself “truly in it.” He even suggests he may only do it for “five to 10 years until my next job” due to how unpredictable the industry is.

Alongside acting, he also writes plays. His prior acting credits include the Prime TV series Riches, and Prime TV’s Frank of Ireland, in which he played the role of Stéphane. His first acting credit was in the 2018 short film Dreams.

As for modeling, Forman said he never felt “destined” for that career. “I wasn’t tall or unique looking; I was very ordinary, [and] in fact I struggled with severe acne,” he said. Eventually he was scouted by a small agency in Chelsea, London.

Forman dubs himself the "Frenchest Englishman" on his Instagram page, where he shares pictures of his Emily in Paris cast mates and his adventures around the City of Light.

He also makes humorous videos on TikTok, joking about the struggles of being an introvert, being a disappointment to his family, and chiming in on the ever-popular Pride and Prejudice “I’m 27 years old” sound.

He can play guitar

On top of his acting skills, Forman can play the guitar and ukelele, according to his Instagram page. In an April 2019 post, he performed Elvis Presley's "Love Me Tender,” writing, "May I serenade you?" in the caption. “Everyday, everywhere, any time,” wrote one fan, while another commented, “He can sing to me all night.”

Clearly Forman has already won over viewers, and Emily in Paris fans will just have to wait and see if Nicolas steals Mindy’s heart as well.