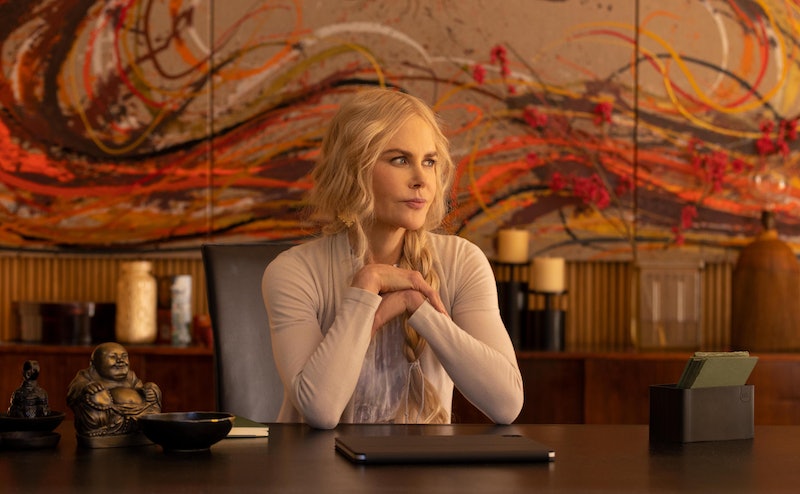 Spoilers ahead for Episodes 1-3 of Nine Perfect Strangers. Masha may feel like she’s been reborn, but her past isn’t fully behind her. As she leads Tranquillum’s guests through their 10-day retreat on Nine Perfect Strangers, she begins receiving anonymous threats over text. She expresses concern to staffers Delilah and Yao, but admits the messages could be coming from anyone; in the past, she concedes, she “wasn’t a very nice person.”

“I came here from Russia and I worked. I consumed. I climbed. I built a company,” Masha explains to Tranquillum’s guests. “I went over people. I went through people.” One day, she was walking in a parking garage when a masked assailant suddenly shot her. She was clinically dead for a few moments until Yao, then an EMT, brought her back to life. “You have all come here to die,” she tells them. “And I will bring you back.”

Masha initially assumes that her mysterious troll is someone from her past, as she expresses several times that she used to be pretty heartless. (It’s unclear what Masha used to do for work, but considering she’s probably drugging the guests and had enough money to even build Tranquillum, it was probably not all above board.) However, a later message she receives begins to convince her that perhaps the person is much closer than she thought. “Can’t take my eyes off you,” one text to her reads when she’s standing alone in her office.

It’s not like Tranquillum is closed to outsiders — it looks like all the guests just drove right in — but it is situated on a pretty secluded property deep in the woods. It’s possible that the person threatening Masha is someone from her past (maybe the one who shot her) who’s now hiding somewhere on the grounds. But it also seems like at least one of them — from Masha and her staff to the nine guests — would have noticed if someone else was creeping around.

Still, there are a number of other options. One possibility is that the sender is one of the guests. We know all of them are withholding information about themselves, and that even the most good-natured among them, like Carmel and Napoleon, are capable of sudden violence. We know almost nothing about Lars except that he distrusts everything about Masha, and Tony’s dependence on substances makes him one of the more volatile people at the retreat. Who knows what any of them are really capable of?

There’s also the strange relationship between Masha, Yao, and Delilah. Yao and Delilah are dating, but it’s obvious that Masha and Yao are sleeping together. It’s unclear if Delilah is aware of this, and on top of that she seems to be increasingly wary of Masha’s decision-making. (When Masha says to begin the “new protocol” on the guests, Delilah asserts they’re “not ready” and “it hasn’t been tested”). Is it possible Delilah has become increasingly disgruntled with Masha, enough to cause her to send Masha threatening messages?

Another possibility is that Masha is completely imagining the messages. Based on her heavy focus on smoothies and talk of special “protocols,” it’s pretty clear that Masha is drugging the guests in some way, likely through their smoothies. If that’s the case, there’s a chance that Masha is also on substances herself, or has at least used them enough to trust them as a viable treatment option. How reliable of a narrator is Masha, really? She’s never shown the texts to Yao or Delilah, so are they even there? Or are they just a hallucination, yet another sign that Masha has more work to do in overcoming her own trauma?