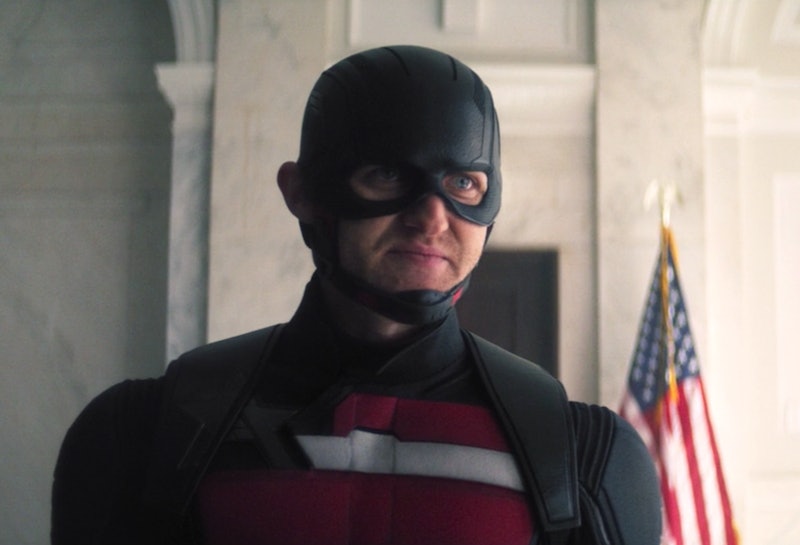 The Falcon and The Winter Soldier creator Malcolm Spellman is careful not to call any of the show’s characters a villain. Though Karli (who’s now dead), Baron Zemo (who’s now in prison), John Walker (who was stripped from his Captain America position), and even Sharon Carter (later revealed to be the Power Broker) each schemed and murdered their way through Season 1, “one thing we did not want to do was judge any of [them],” Spellman tells Bustle. Instead, he sees them as gray area antagonists who create obstacles for the show’s more clearly defined heroes.

Karli, for example, is driven by an objectively good cause: to uplift the refugees left disenfranchised and abandoned when everyone returned from The Blip. But she goes to violent lengths to achieve her mission. Spellman contrasts her to a true MCU villain like Thanos, who believed the only way to solve poverty and resource scarcity was to kill half of the universe’s population. “Thanos believes what he's doing is right, but everybody in the MCU understands it's fundamentally wrong,” Spellman says.

With Karli, however, Sam recognizes where she’s coming from, even reprimanding the GRC council for calling the Flag-Smashers terrorists during his first public address as Captain America. In Spellman’s eyes, “If Karli had stopped one or two episodes earlier” before she blew up the GRC building, Sam, Bucky, and other well-meaning MCU characters “probably would have supported her.”

Similarly, Spellman says that he believes fans can understand Zemo’s point of view. Though Zemo was a Nazi baron in the Marvel comics, in the MCU he was rewritten to be a grieving Sokovian father whose family died during Avengers: Age of Ultron. He thinks all super-powered beings are powerful and corrupt “supremacist” cops, which is why he ensures that even the Flag-Smashers who are surrendering at the end of the season are blown up.

“Zemo's expressed his opinion on why [those people] had to go,” Spellman says, adding that the character’s anti-supremacist stance “transcends race.” While the remaining Flag-Smashers who Zemo murdered happened to be people of color — seemingly an allusion to Zemo’s comic book roots — Spellman says that race “was not meant to come into play in that [scene],” and that Zemo is against “a general concept of supremacy” rather than being flat-out racist.

Portraying Falcon’s antagonists as ethically ambiguous seems meant to parallel Sam’s own complex feelings about taking on the Captain America mantle as a Black man, but it’s also left some fans frustrated. Some viewers were disappointed that Sharon Carter, the great-niece of S.H.I.E.L.D. founder Peggy, ended up as a “supervillain” making shady deals in Madripoor. But Spellman says they wanted to honor the fact that she’d been on the run since Civil War and largely forgotten by the government. “She's a woman. She was [viewed as] more expendable in their mind,” he explains. “Her journey was a lot harder [than the male Avengers on the run]. And it turned her...she kind of grew up.”

Even more controversial was the decision to make John Walker’s story “a bit redemptive,” as Falcon director Kari Skogland recently put it to io9. A war veteran whose arc revolved around his anger that he wasn’t as respected — or as capable — as Steve Rogers was as Captain America, Walker seemed to represent the same kind of harmful, unyielding patriotism that thrived under Trump’s presidency. His public image was soured after he ingested the super-soldier serum and subsequently beat a Flag-Smasher to death with the Captain America shield in public. But during a brief moment in the finale, he chose to save a truck full of GRC people rather than pursue his vendetta against Karli for accidentally killing Lemar, which was apparently meant to make him feel more sympathetic. “I would argue that everyone in the MCU, or most people in the MCU, can understand a lot of John Walker when he's at his best,” Spellman says.

But some fans disagree. “I really can’t believe John Walker was ready to kill Sam and Bucky last episode and in the finale he gets a sh*tty, out of nowhere redemption arc, but Karli, whose cause was good but she was too young and naive to realize her path was wrong, had to die,” wrote one viewer on Twitter. Another said it was an “insurmountable flaw” that they’re expected to accept “John Walker as a more tolerable figure than Karli,” while others have reacted to the idea that Walker is any kind of hero — or anti-hero — with disbelieving reaction pics and humorous memes.

We’ll have to see where John Walker, Sharon Carter, and Zemo go from here, but one thing is certain: The Falcon and The Winter Soldier has left fans with a lot to discuss.