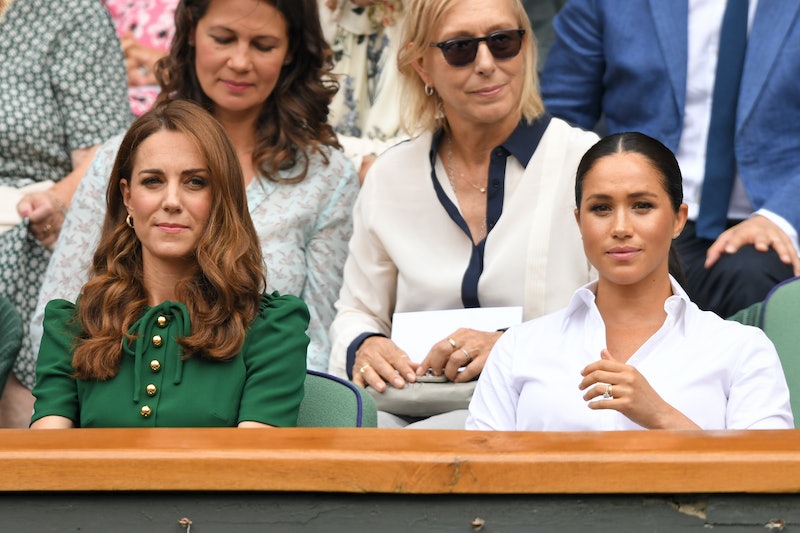 The royal family’s dynamics are being re-evaluated after Meghan Markle and Prince Harry’s tell-all interview with Oprah Winfrey. That includes where Meghan’s relationship stands with her sister-in-law, Kate Middleton, amid revelations about a past disagreement. Rumors about the pair’s friendship (or lack thereof) have circulated since Meghan and Harry’s engagement. But speculation has only intensified after Meghan revealed that Kate made her cry during a conversation about flower girl dresses before the May 2018 royal wedding.

According to a new report from Us Weekly, Kate and Meghan aren’t exactly on speaking terms at the moment, with an insider claiming they haven’t talked “directly in over a year.” Their lack of communication is not due to the wedding-related conflict, which Meghan said Kate apologized for. Instead, their distance has more to do with their differing royal styles. “In the beginning of their relationship, Kate and Meghan did get along,” the Us source said, but “they didn’t see eye-to-eye when it came to day-to-day life in the palace.”

Additionally, the “space” between Prince Harry and Prince William has also contributed to the distance between the duchesses. “They were never that close, but the reason they’re not speaking is because of the rift between Prince Harry and Prince William,” a source told the outlet. “Harry and William have communicated sparingly over the last year, but none of their communications have been friendly in quite some time. There is real animosity that the brothers have toward one another, and that has spilled over to Meghan and Kate’s relationship, making it very hard for them to be friends or even friendly.”

In light of Meghan and Harry’s comments about the palace’s “toxic” environment, a source told Us that Kate “wishes she knew more” about the couple’s turmoil. During the Oprah interview, Meghan confirmed that tabloid reports claiming she had made Kate cry over flower girl dresses were false. "The narrative with Kate, which didn’t happen, was really difficult," she began. "A few days before the wedding, she was upset about something pertaining to the flower girl dresses, and it made me cry, and it really hurt my feelings." Meghan went on to say that “there wasn’t a confrontation,” adding, “I don’t think it’s fair to her to get into the details because she apologized, and I’ve forgiven her.”

In a separate clip released from the interview later this week, the Duchess of Sussex took issue with comparisons between media coverage of herself and her sister-in-law. "Kate was called 'Waity Katie,' waiting to marry William," Markle recalled. "While I imagine that was really hard — and I do, I can't picture what that felt like — this is not the same. And if a member of his family will comfortably say, 'We've all had to deal with things that are rude,' rude and racist are not the same."

Kate has yet to officially address Meghan and Harry’s interview. Prince William, however, told the press on March 11, “We’re very much not a racist family.”