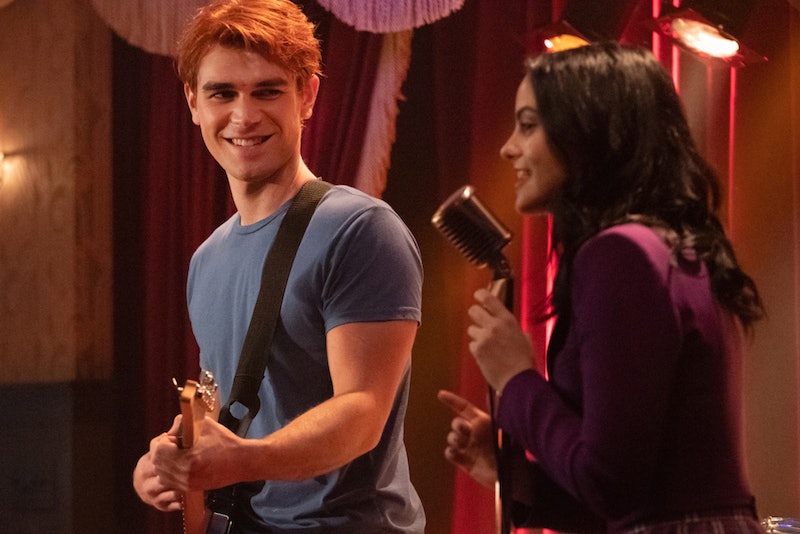 The good news? The Riverdale cast has reunited in Canada to film Season 5 after COVID-19 halted production in March. The bad news? A perilous fate may await one of the core four characters. Showrunner Roberto Aguirre-Sacasa tweeted a photo of two scripts on Thursday, Sept. 3 that hinted at an unexpected Riverdale Season 5 death: Archie Andrews. Yes, the idea of the series killing off one of its main characters seems inconceivable, but the artwork is damning.

AIguirre-Sacasa tweeted the images of the scripts while announcing that table reads via Zoom have begun for Season 5. For Season 5, Episode 4, “Chapter Eighty: Purgatory,” there’s a rendering of Betty Cooper, Veronica Lodge, and Jughead Jones standing over a grave as an image of Archie in an army hat — a nod to his decision to join the Naval Academy after graduation — hovers above them. It’s already been established that there will be a time jump, so could this mean that Archie will lose his life in combat?

Season 4 prematurely ended just before prom with Episode 19, “Chapter Seventy-Six: Killing Mr. Honey" in May due to the pandemic. Per Aguirre-Sacasa’s (worrisome) tweet, Season 5 will resume with a continuation of graduation and prom prior to the time jump. So, what could the rest of Season 5 look like? Along with the possibility of Archie’s death, below are some major fan theories about the new season.

The Time Jump Will Skip Over College

Aguirre-Sacasa has already confirmed that there will be a major time jump that will “leapfrog over [those] four years” after graduation — one that will drop viewers into “the middle of something crazy.” With that in mind, it’s safe to assume that viewers won’t see Betty, Veronica, Jughead, and Archie’s college years. Because of this, fans have maintained that Betty and Jughead, as well as Archie and Veronica, will no longer be couples (and possibly even estranged as friends). Which leads to the next theory…

Betty, Veronica, and Jughead are No Longer in Riverdale

Since Betty, Veronica, and Jughead will all presumably go their separate ways for college, it's been theorized that the time jump will resume in different cities and much of the episodes won’t even take place in Riverdale. As for Archie, one theory is that he’ll finish his time at the Naval Academy and eventually return home. However, something drastic will happen that will reunite the core four back in their hometown again.

Since Aguirre-Sacasa teased that viewers will be dropped into the “middle of something crazy,” this could mean a myriad of twisty storylines. Could it be… the death of their dear friend Archie, who never made it home from Naval Academy after all? Or could it signal the return of someone sinister from their past? Which brings us to the next theory...

The Black Hood is not! dead! after! all! A fan has theorized that the “crazy” storyline will be that Penelope Blossom never actually killed The Black Hood, otherwise known as Hal Cooper. In fact, he’s been in hiding all this time — and just might be behind some new murders in Riverdale. Could Betty Cooper’s father be behind those disturbing videotapes as well? That’s one possibility.

Charles is Behind Those Disturbing Videotapes

Another major theory is that Charles, Betty’s FBI agent half-brother, is behind the disturbing videotapes featured prominently in Season 4. Betty spent much of the season suspicious about Charles’ intentions, and her instincts were proven true once viewers learned that he was, in fact, in cahoots (and in a possible relationship?) with Chic. Charles’ visit to Chic in prison made it clear that the two are up to something. It’s possible that the two have been sending the tapes.

Riverdale Season 5 is expected to return to the CW sometime next year, so fans will need to wait until then to get a definitive answer about Archie's fate.