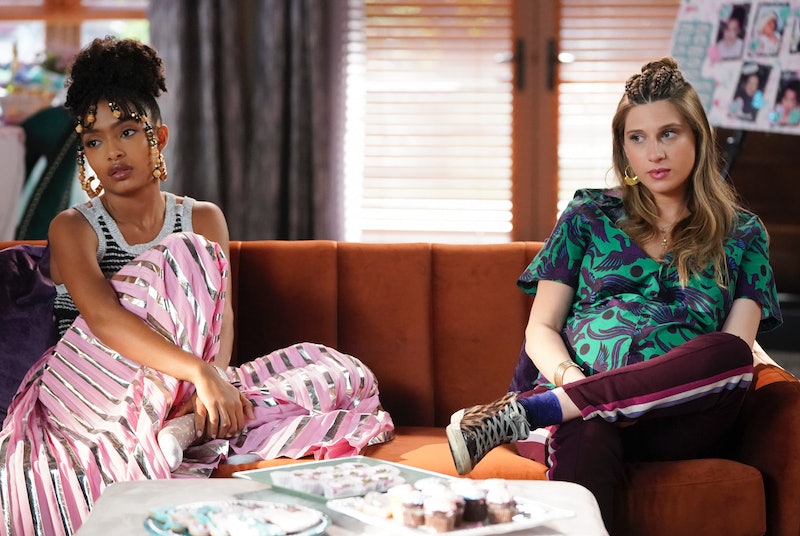 Earlier: Following a surprise baby shower, Nomi decided to leave CalU in grown-ish's Feb. 13 episode, leaving viewers to wonder if she'll ever return to the show. It's hard to imagine Emily Arlok won't be back eventually, but the episode certainly felt like a farewell.

In it, Nomi agonized over some very difficult decisions, including whether or not to keep her unborn baby or place it up for adoption. She also struggled to decide whether or not to tell her one-night stand that he's the father of her child. Following several scenes of legit every one of her friends giving their opinions about the matter, Zoey privately reminded Nomi that these are choices only she can make.

"I'm not going to be able to think about it here, not clearly anyway," Nomi admitted to Zoey. "I think I need to go home. Is that like the coward's way out?" (For the record, Zoey thought moving back in with her parents was "actually a really brave decision.")

After loading her car to the airport, Nomi said her goodbyes one by one to Vivek, Ana, Aaron, Jazz, Sky, and Luca, who naturally recited a Cherokee phrase he said meant, "Until we meet again." Zoey told Nomi she didn't even want to say goodbye because she knew they would see each other again soon. "I'm gonna miss you the most," replied a tearful Nomi.

Suffice it to say the tears were warranted. Despite the fictional storyline, the painful decisions Nomi found herself facing are all too real for many of the nearly 4 million student parents enrolled in college in 2019, per NPR. The publication further reported that student parents are mostly women (about 70%), who are more likely to be from low-income families and students of color. Given Nomi's financial security, supportive parents, and self-acknowledged white privilege, her choice to move home may have been tough, but there are plenty of people who don't have the same option in real life.

While Ana (still overly excited about the "house baby") claimed in the episode that there are a lot of student parents who make it work, Nomi interjected that most of them take at least five years to graduate. That's partly why she said her parents have been all over her about how difficult it would be juggling a full course load as a single mom. (Here, Jazz and Sky also inadvertently demonstrated the judgement women who breastfeed in public are often subject to.)

Though supportive either way, Zoey seemed to be fully onboard with Nomi going the adoption route. She didn't think that that Nomi should "have to give up her life" to take responsibility for her "mistake." After all, the baby "could become a blessing for" couples who can't biologically have kids themselves, Zoey explained. While on the topic of a possible open adoption, Nomi reminded everyone of her decision's gravity, assuming that particular scenario would be a "really painful thing for me and the baby." In the end, Zoey acknowledged "the difficult choice Nomi was making" and that they'd always come together "to support and love each other no matter what."

As Nomi finally departed for the airport, tears welled in her eyes as she scrolled through baby shower pics, ultimately landing on her recent sonogram photo. That's likely all the evidence fans will need to show how taxing this choice had been for Nomi — and so many others in real life, too. What she decides to do from here is up to her now, but as viewers learned, no decision will come without sacrifice or consequence.