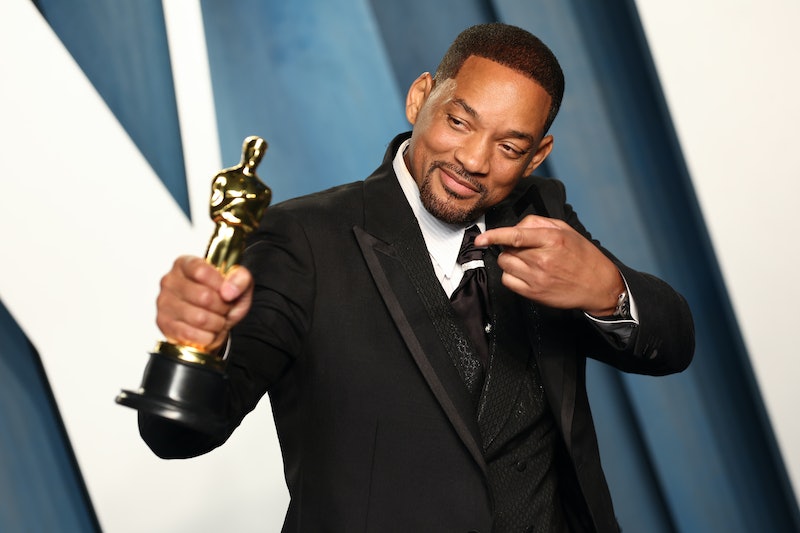 As we all know by now, the 2022 Oscars didn’t quite go as planned. Will Smith slapped Chris Rock after he made an offensive joke about Jada Pinkett Smith’s shaved head, despite her struggle with alopecia. “Will Smith just smacked the sh*t out of me,” the comedian said as the King Richard star returned to his seat. In response, Smith warned: “Keep my wife’s name out your f*cking mouth!”

In the days following, Smith and the Academy released statements about what happened. The Academy’s latest statement claims that despite their efforts to escort Smith out of the ceremony, he wouldn’t leave. “Things unfolded in a way we could not have anticipated,” the statement read, according to E! News. “While we would like to clarify that Mr. Smith was asked to leave the ceremony and refused, we also recognize we could have handled the situation differently.”

The latest statement also makes clear that Smith violated “the Academy’s Standards of Conduct, including inappropriate physical contact, abusive or threatening behavior, and compromising the integrity of the Academy.” It’s unclear what consequences the actor may face as a result of his actions. However, the Board of Governors has already begun disciplinary proceedings and will eventually vote on the appropriate ramifications. The meeting is scheduled for April 18.

“Mr. Smith’s actions at the 94th Oscars were a deeply shocking, traumatic event to witness in-person and on television,” the statement continued. “Mr. Rock, we apologize to you for what you experienced on our stage and thank you for your resilience in that moment. We also apologize to our nominees, guests and viewers for what transpired during what should have been a celebratory event.”

The Academy first condemned Smith’s behavior early on Monday, March 28, shortly after the show aired. “The Academy does not condone violence of any form,” the statement posted to the Academy of Motion Pictures Arts and Sciences’ Twitter account read. In a separate statement, they confirmed that they started “a formal review around the incident and will explore further action and consequences in accordance with our Bylaws, Standards of Conduct and California law.”

Smith, for his part, apologized to the Academy and Chris Rock in a statement published on Instagram that same day. “Violence in all of its forms is poisonous and destructive,” the Collateral Beauty star wrote, calling his behavior “unacceptable and inexcusable.” “Jokes at my expense are a part of the job, but a joke about Jada’s medical condition was too much for me to bear and I reacted emotionally. I would like to publicly apologize to you, Chris. I was out of line and I was wrong.”

Smith wrote that he’s “embarrassed” by how he reacted and said that his actions “were not indicative of the man I want to be.” “There is no place for violence in a world of love and kindness. I would also like to apologize to the Academy, the producers of the show, all the attendees and everyone watching around the world. I would like to apologize to the Williams Family and my King Richard Family. I deeply regret that my behavior has stained what has been an otherwise gorgeous journey for all of us. I am a work in progress. Sincerely, Will.”

More like this
14 Women To Watch This Oscar Season
By Marina Watts
Where Is Former Bachelor Host Chris Harrison Now & What Is His Net Worth?
By Hugh McIntyre
Who Is Nick Cannon Dating & How Many Kids Does He Have?
By Jordyn Tilchen and Radhika Menon
Khloé Kardashian Is Reportedly Dating A Private Equity Investor She Met Through Kim
By Jordyn Tilchen and Jake Viswanath
Get Even More From Bustle — Sign Up For The Newsletter