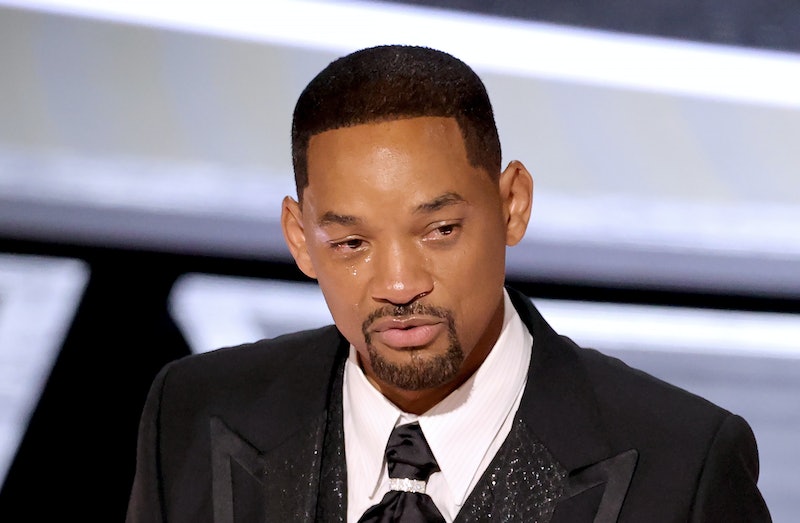 Facing possible suspension or expulsion, Will Smith resigned from the Academy of Motion Picture Arts and Sciences on April 1 after slapping Chris Rock during the 2022 Oscars. The Best Actor winner noted that he’d “directly responded to the Academy’s disciplinary hearing notice,” calling his actions at the 94th Academy Awards presentation “shocking, painful, and inexcusable.”

On April 8, the Academy of Motion Picture Arts and Sciences (AMPAS) shared a message with its members outlining the specific punishment Smith faces for his actions: “Today, the Board of Governors convened a meeting to discuss how best to respond to Will Smith's actions at the Oscars, in addition to accepting his resignation. The Board has decided, for a period of 10 years from April 8, 2022, Mr. Smith shall not be permitted to attend any Academy events or programs, in person or virtually, including but not limited to the Academy Awards.”

After learning about the Academy’s decision, Smith responded to the news in a brief statement to People: “I accept and respect the Academy's decision.”

The Academy’s emailed statement, which was signed by both AMPAS president David Rubin and the organization’s CEO Dawn Hudson, went on to express “deep gratitude to Mr. Rock for maintaining his composure under extraordinary circumstances.” The Academy also made sure to thank “our hosts, nominees, presenters and winners for their poise and grace during our telecast.”

In his April 1 statement, Smith stated that he will “fully accept any and all consequences” for his conduct and that he had “betrayed the trust of the Academy.” Though the Academy has not discussed taking away Smith’s 2022 Oscar, according to a Deadline source, the board of governors reportedly informed him earlier in the week that he could face a decade-plus-long expulsion from the organization he joined in 2001. By resigning, he seems to hope the spotlight will move away from the scandal and back to the accomplishments of this year’s Oscars nominees and winners.

“The list of those I have hurt is long and includes Chris, his family, many of my dear friends and loved ones, all those in attendance, and global audiences at home,” Smith continued. “I deprived other nominees and winners of their opportunity to celebrate and be celebrated for their extraordinary work. I am heartbroken. I want to put the focus back on those who deserve attention for their achievements and allow the Academy to get back to the incredible work it does to support creativity and artistry in film.”

In a separate April 1 statement, AMPAS president Rubin said that the board of governors — which also includes Laura Dern, Whoopi Goldberg, Ava DuVernay, Steven Spielberg, and Rita Wilson, among others — had “received and accepted” Smith’s “immediate resignation.” Rubin added that the organization will still “continue to move forward with our disciplinary proceedings against Mr. Smith for violations of the Academy’s Standards of Conduct,” ahead of their next scheduled board meeting on April 18.

Multiple aspects of the King Richard star’s behavior on Oscars night “did not sit well” with some Academy members, per Variety. Points of contention are reportedly Smith’s Best Actor acceptance speech, in which he apologized, but not to Rock, as well as his decision to attend the Vanity Fair after-party. (Smith publicly apologized to Rock in a statement the following day.) Meanwhile, there have also been conflicting accounts about whether or not Smith defied a request to leave Hollywood’s Dolby Theatre after he hit Rock for cracking a G.I. Jane joke about wife Jade Pinkett Smith, who’s openly discussed her experience with alopecia-induced hair loss. The Academy said in a statement that they’d asked Smith to leave, but he refused; however, sources for Variety claim it wasn’t a formal request. Rubin and AMPAS CEO Hudson spoke to Smith’s rep, but not directly to the actor, according to Deadline. A source claimed his rep came to him with “the suggestion” of leaving.

Appearing on Good Morning America on April 1, Oscars 2022 producer Will Packer explained the chaos behind the scenes, saying that Rock “was keeping his head when everybody was losing theirs.” Off stage immediately after the incident, Packer recalled Rock’s quip that he “just took a punch from Muhammad Ali,” noting that he could tell that his longtime friend “was very much still in shock.” Indeed, during the March 30 opening of his new comedy tour, Rock told the Boston crowd that he was still “kind of processing” what happened and predicted that he would address it further at a later date. The comedian had to speak with the Los Angeles Police Department during the awards show, as LAPD was reportedly prepared to arrest Smith for battery. However, Packer confirmed that Rock had “declined to file a police report.”

With his resignation, it seems Smith has preempted perhaps the Academy’s highest possible punishment, though it’s unclear if more fallout still lies ahead.

This article was originally published on April 2, 2022