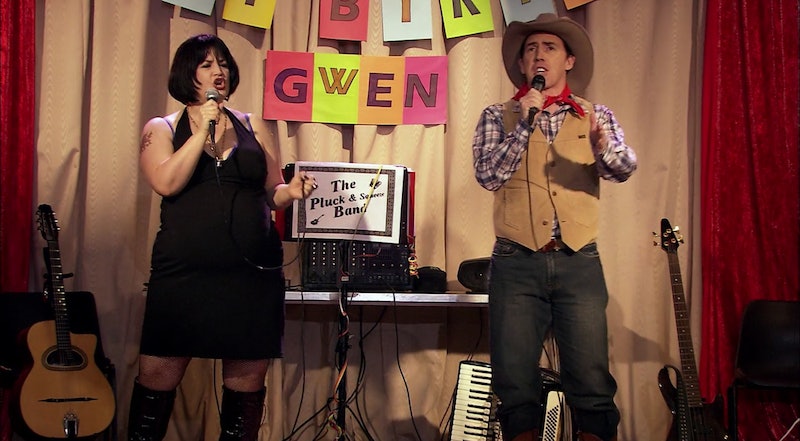 After the rip roaring success that was the Gavin & Stacey Christmas special in 2019, fans were left sated but definitely had room for more. Ever since it aired, the question on everybody's lips has been, will there be another trip down Billericay and Barry any time soon? Some have even suggested a Gavin & Stacey movie could be on the cards, but how much truth is there in that? Let's find out.

Well, the cast seem divided on the idea of a Gavin & Stacey movie. In an interview with OK! back in May Larry Lamb (AKA Mick Shipman) spoke about his time on the show and any potential of returning to the role.

"I think it would be pretty cruel to leave us on that cliffhanger," Lamb said, referencing the moment when (spoiler alert!) Nessa got down on one knee. "After the response it got at Christmas, you can more or less be certain that, sooner or later, there will be more," he added. "I'm sure the BBC can persuade Ruth [Jones] and James [Corden] to write more, so it's a question of when, not if."

Gavin & Stacey was written by Jones and Corden, who are very busy with their personal lives and careers (Corden is based in the U.S. currently), so it's hard to imagine when they'd get the chance to sit down and churn out another script, let alone actually shoot on location. However, Jones did thankfully find time for a quick Nessa outing this year when she uploaded a PSA about social distancing during the COVID-19 crisis.

"The problem is, logistically, it's a bloody nightmare as so many people involved have very active careers," Lamb told OK! "But I imagine there will be another special. It won't be any time soon though, that's for sure as it has to be written first."

Lamb added in his interview that, all things considered, making a movie might be a more sensible choice. "I’ve always thought a logical thing to do would be a Gavin & Stacey movie," he said. "But that’s just my idea. James and Ruth are big enough to carry a movie now. But as an actor, you're often the last to know."

However, while that all sounds promising, another actor from the show has a totally different opinion on the movie front. On Oct. 21, Rob Brydon (AKA Uncle Bryn) was speaking to Digital Spy about the possibility of Gavin & Stacey on the silver screen when he said ""I don't think they should do that. I think that would be a mistake. It's not a film. It's not a cinema thing. It is what it is, and I don't hold film over television."

He added: "There's sometimes an assumption that if it were to become a film it would somehow be elevating itself, and I think that's a misnomer. I think that's a mistake. I think that maybe, if James and Ruth decided to make another special, that would be wonderful, but I don't at all buy into this idea that a film of a TV show is somehow elevating it and taking it to another level. I just don't see that myself."

Oh man, so it looks like the jury's out on this one. Watch this space.