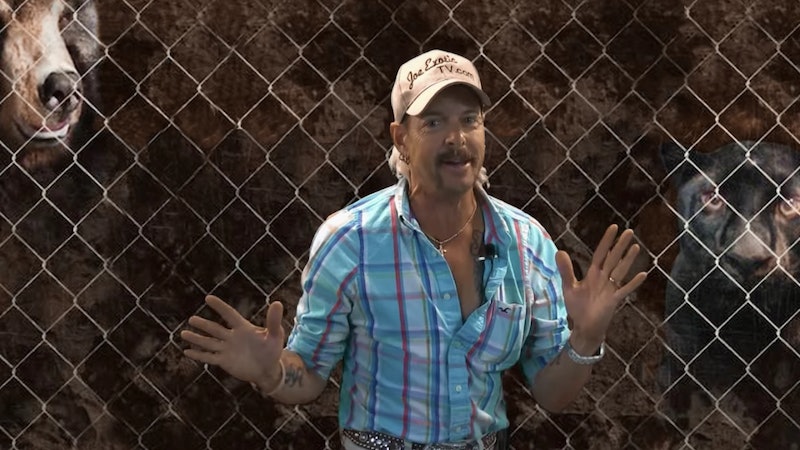 Update: Netflix has confirmed that Tiger King will return for a second season in late 2021. No further information is available at this time.

Earlier: If you haven't yet started watching Tiger King, you're missing out on one of the wildest shows currently on Netflix. It follows the life of the outlandish Joe Exotic (real name Joseph Maldonado-Passage), a bleached mullet-sporting, big cat-loving zoo owner whose story includes polygamy, an ill-fated presidential campaign, and an alleged murder-for-hire scheme. Fortunately (or maybe unfortunately?), it seems pretty possible that we haven't yet seen the last of Joe Exotic: though Netflix hasn't yet renewed Tiger King for Season 2, producers Eric Goode and Rebecca Chaiklin recently teased to Entertainment Weekly that there could be a way to expand the story — even though Joe is currently serving 22 years in federal prison.

"We have a crazy amount of footage and it's a story that's still unfolding," Chaiklin said. "We're not sure yet, but there could be a follow-up on this story."

If a second season does come to fruition, it could focus on some of the eccentric side characters that were sprinkled throughout Season 1, like Doc Antle (sorry, Bhagavan Antle) and his many wives down in Myrtle Beach, or the colorful employees who worked for Joe (fans particularly love Kelci "Saff" Saffery, who lost her arm to a tiger). Or it could show how Joe Exotic's zoo is faring in his absence, as it's now being run by Jeff and Lauren Lowe.

At this point, it seems like fans would watch anything even tangentially related to Tiger King: everyone from Kim Kardashian to JoJo and Zach Braff have been obsessing over the series on social media. The story has everything: murder-for-hire, missing husbands, cults, cyberbullying feuds, kinky wedding photos, and drug kingpins who may or may not have been the "prototype for Scarface," as Mario Tabraue put it in the show. It's truly an embarrassment of riches.

If, for whatever reason, Tiger King doesn't get a second season, there are more ways to get your fix on this absolutely bonkers story. Not only is Saturday Night Live's Kate McKinnon slated to play Joe Exotic's nemesis, Carole Baskin, in an upcoming TV show, but it's based on the Wondery's Joe Exotic: Tiger King podcast, which you can listen to now. Plus, viewers are already dream-casting for subsequent biopics. Top choices include Danny McBride as Joe Exotic, Kristen Wiig as Carole, and Will Ferrell as Doc Antle. Suffice it to say, there should be no shortage of Tiger King content to come, with or without Joe Exotic.

This article was originally published on March 24, 2020