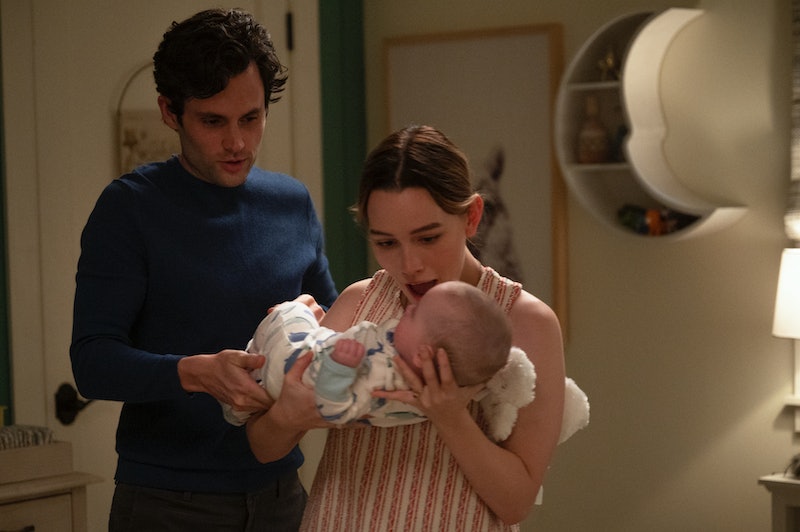 With YOU Season 3 now streaming, it’s time to revisit the books that inspired the hit show. The third novel in Caroline Kepnes’ You series, You Love Me, landed in stores earlier this year — and the ending is full of twists and turns. Major spoilers for You, Hidden Bodies, and You Love Me ahead.

When we last left Joe Goldberg, at the end of 2016’s You sequel, Hidden Bodies, it seemed as if Kepnes’ creepy serial killer had met his match in Love Quinn: an heiress who caught Joe’s eye in Los Angeles, after he traveled to California to find an ex who’d stolen his rarest books.

But Joe was still looking over his shoulder, as even though Beck’s therapist was on the hook for her murder, Joe left a key piece of (really gross) evidence back at Peach’s home. Worried that he’ll be collared for Peach’s homicide, Joe confesses everything to Love, who helped him recover his bodily fluids from the crime scene. Unfortunately, Love’s heroics weren’t enough to save Joe, who ended Hidden Bodies in a jail cell awaiting trial for the murders of Beck and Peach. Outside, Love was pregnant with his child, and had convinced her wealthy family to pony up for Joe’s legal fees. Talk about a ride or die.

When You Love Me opens, Joe is a free man working at a library in the Pacific Northwest. Separated from Love and Forty — their son, named for Love’s late twin brother — Joe has set his sights on Mary Kay: a librarian and mother to a teenage daughter, Noni. After his troubles in New York and LA, Joe intends to woo Mary Kay in the traditional way — i.e., without murdering anyone to get close to her.

Of course, abstaining from violence is easier said than done when you’re a serial killer. Joe’s biggest problem is Melanda: Mary Kay’s best friend, who catches Joe spying on the object of his twisted affections. Joe decides she needs to be eliminated, and proceeds to kidnap her and lock her up in his basement. While there, Melanda reveals that she and Mary Kay’s husband, Phil, have been having an affair, before dying by suicide. Phil later overdoses, leaving Mary Kay free to pursue a relationship with Joe.

No sooner has Joe settled into his new life with Mary Kay and Noni, however, than Love summons him to LA. Joe hopes to see his son while he’s visiting, but Love has other plans. She attempts a murder-suicide, shooting Joe and then herself. Joe survives but soon finds that his relationship with Mary Kay has hit the skids.

Ever the charmer, Joe convinces Mary Kay to give their relationship another shot. Their happiness is short-lived, however. Noni mistakes Joe’s interest in her mother for an interest in herself. She gravely injures her mother in an ensuing argument, and Joe heads off to Florida to go into hiding yet again.

Caroline Kepnes’ You Love Me is available now. You Season 3 is now streaming on Netflix.