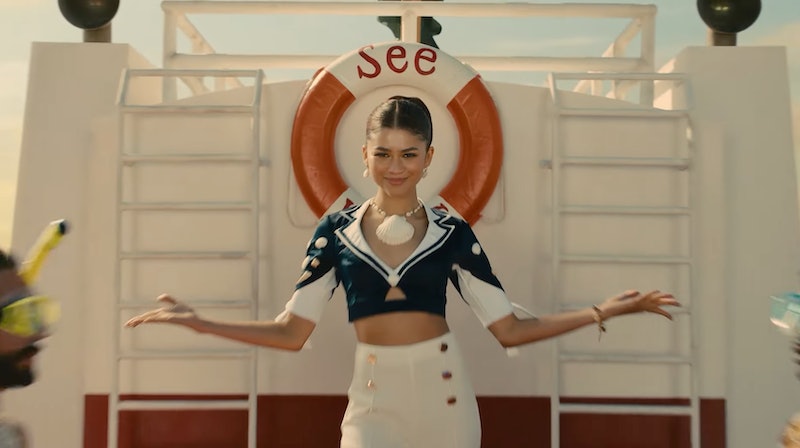 Just days after delivering one of her most devastating performances ever on Euphoria, Zendaya is here to remind you that she’s very much OK. In fact, in another world, she’s peacefully selling seashells by the seashore.

Released on Feb. 9, Zendaya’s Super Bowl commercial for Squarespace brings an old tongue-twister to life. She stars as Sally, a woman whose seashell business struggles until she makes an online store and things start picking up. More alliterative achievements follow. In total, her empire expands to include swanky seashell accessories, shiny seashell sequin skirts and sarongs, seashell serenity sessions starting sharply at sunrise, exceptionally savory seaside snacks, and seashell excursions of the seashore!

Zendaya doesn’t do much talking in the ad. Rather, the work of all that tongue-twisting narration falls to Outkast’s André 3000, who makes an appearance as a sailor later in the ad. The Euphoria star, for her part, spends most of her time making power moves in entrepreneurial beach chic as Sally enjoys the fruits of her seashell biz (as she deserves). The looks include a colorful knit sweater, a strapless ruched moment, a seashell-adorned halter dress, and a nautical ensemble, making her the most stylish cruise director you’ve ever seen.

As Zendaya revealed to Teen Vogue, the outfits — which definitely deserve a spot on your summer mood board — were put together by none other than her trusted stylist, Law Roach. “Law and I have such a collaborative and trusting creative process, so it was really smooth,” she said. “It was also fun to lean into the more costumey and theatrical elements of the commercial and just have some fun with our interpretation.”

The whole spot is beautiful and cinematic, which makes sense because a renowned filmmaker was behind the Super Bowl ad. Baby Driver’s Edgar Wright served as director, writing on Twitter that he “had a blast” working with Zendaya and hopes to collaborate with her and “musical legend” André 3000 again.

More like this
'Breaking Bad' Duo Walt & Jesse Are Back — In This Super Bowl Commercial
By Jake Viswanath
Turns Out George Clooney Is A Huge Fan Of This Classic British Game Show
By El Hunt
'GoT' Star Emilia Clarke Says She "Just Can't" Watch 'House Of The Dragon'
By Brad Witter
The Black Lotus Staff Has "Had Enough" In The 'White Lotus' Spoof From 'SNL'
By Brad Witter
Get Even More From Bustle — Sign Up For The Newsletter
From hair trends to relationship advice, our daily newsletter has everything you need to sound like a person who’s on TikTok, even if you aren’t.