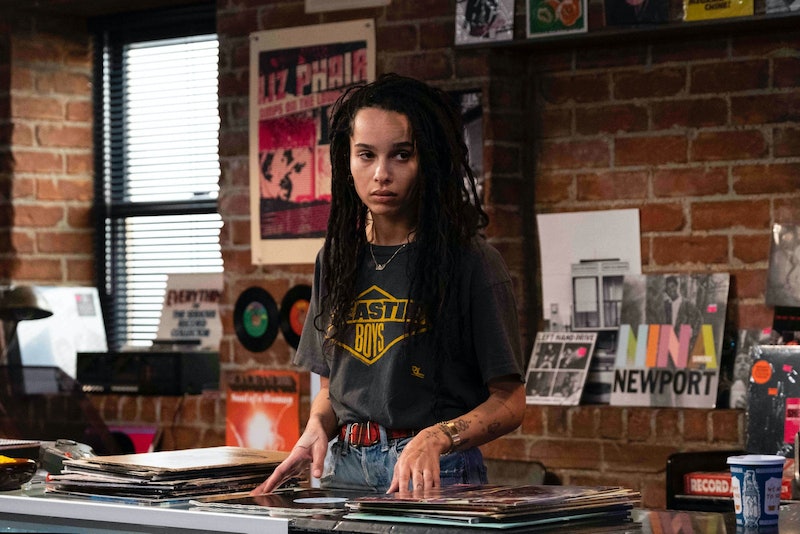 Just days after the streaming service announced that they pulled the plug after one season, Zoë Kravitz called out Hulu for cancelling High Fidelity. The actor — who starred as Rob in the updated adaptation of Nick Hornby's 1995 novel and the subsequent 2000 movie — shared a tribute to the critically acclaimed series on social media, shortly after Hulu announced that High Fidelity would not get a second season. In the comments, she responded to her friend and fellow actor Tessa Thompson's disappointment over the cancellation by calling out Hulu's lack of shows feature Black female leads.

"I wanna give a shout out to my #highfidelity family," Kravitz wrote, alongside a slideshow of photos from filming with costars Da'Vine Joy Randolph, David H. Holmes, Jake Lacy and Kingsley Ben-Adir. "Thank you for all the love and heart you put into this show. i'm in awe of all of you. and thank you to everyone who watched, loved and supported us." She also added the very appropriate hashtag "#breakupssuck," which her character would no doubt agree with.

Kravitz's comment section was flooded with messages of love for the show from some of her famous friends, including Thompson. "I will miss you alllllllllllll so much," the Thor: Ragnarok star wrote, which inspired Kravitz to call out the streaming service for ending one of their most inclusive TV series. "It’s cool. At least Hulu has a ton of other shows starring women of color we can watch. Oh wait," Kravitz responded. Per IndieWire, Hulu has a landing page titled "Black Stories," but none of the movies or TV shows featured are Hulu originals starring a woman of color, and while the streamer's Emmy-nominated limited series Little Fires Everywhere starred Kerry Washington it wasn't designed to be an ongoing series.

High Fidelity, which premiered on Feb. 14, 2020, updated the classic story of Rob, a record store owner who is notoriously unlucky in love. While the book and film featured a primarily white, male cast, the Hulu update tackles the same issues of heartbreak, music and identity from a much more diverse perspective — Kravitz's Rob is a woman of color who has dated both men and women, her best friend Simon (Holmes) is a gay man navigating his own rocky love life, and their coworker, Cherise (Randolph) is a Black woman who is struggling to find her place in a male-dominated industry.

Every character on the show is three-dimensional and relatable in some way, which Kravitz (an executive producer on the series) told The Irish Times was the result of her desire to reflect real life. "I was trying to re-create a world that I know, and that’s what it looks like," she said in a February 2020 interview. "If that show was in Iowa or something, fine, but you’re living in Brooklyn. There’s people of color everywhere. It’s unavoidable. ... It’s impossible. They’re everywhere. We’re everywhere. I’m sorry, but we’re everywhere."

While some fans were skeptical of the modern take on the story, Kravitz explained that the entire story was a labor of love. "I think a lot of white men who identified with the book think it’s theirs, and are ready for us to screw it up, and are going to have trouble seeing it in a different light," she said at the time. "But I think if they get past that thing, they’ll see that we actually really did honor the property, I think." The hardest part of Hulu canceling High Fidelity is that fans won't get to see how Kravitz and the rest of the cast continued to reinvent the story even further — and that Cherise never got to have her big, Marvin Gaye moment.

More like this
On 'The Handmaid’s Tale,' Christine Ko Fights Back
By Gretchen Smail
The 'Reasonable Doubt' Cast Includes A 'Save The Last Dance' Reunion
By Grace Wehniainen
UK Viewers Will Have To Wait To Watch The Handmaid’s Tale S5
By Maxine Harrison
Hulu’s Mike Tyson Series Is Unlikely To Return For Season 2
By Brad Witter
Get Even More From Bustle — Sign Up For The Newsletter