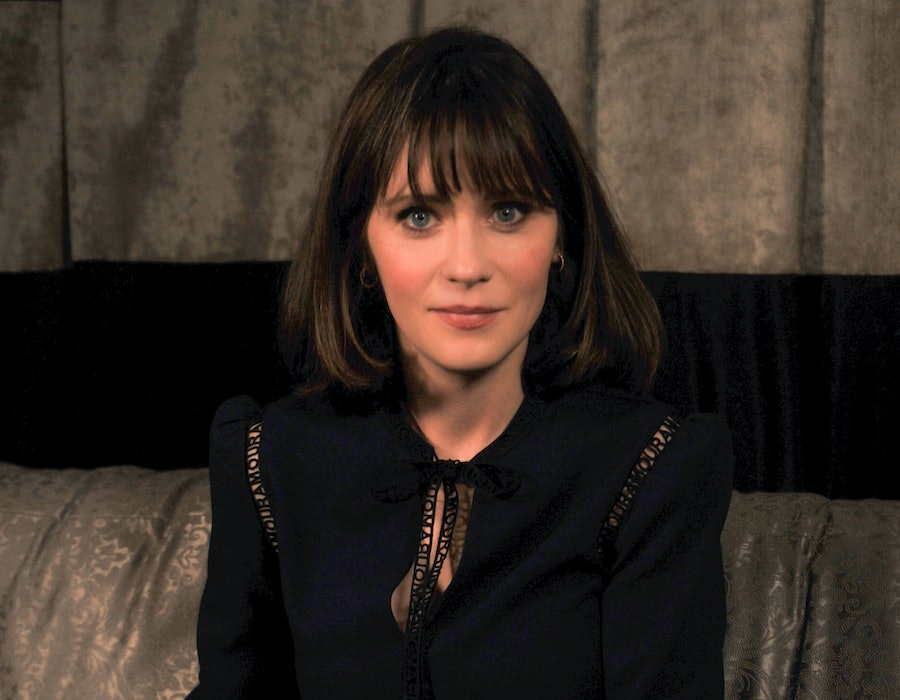 Zooey Deschanel is no stranger to dating on screen. She won over audiences as the guarded Jovie in Elf, then as the whimsical Summer in 500 Days of Summer, and more recently, as New Girl’s Jess, the quirky girl next door–turned–roommate. But earlier this year, she traded fictionalized first dates for reality TV — as a co-host of ABC’s The Celebrity Dating Game, which she runs alongside Grammy-winning artist Michael Bolton. Tonight, the first season finale airs at 10/9c.

As soon as she was offered the role back in February, Deschanel was in. “I loved every minute of it,” she tells Bustle.

Today’s The Celebrity Dating Game updates the 20th-century format — including a physical wall to hide people’s identities from each other — and offers a wry wink at modern dating via a star-studded roster of celebrity singles. Deschanel has played matchmaker for guests like former Bachelorette Hannah Brown, Iggy Azalea, and Margaret Cho. In the middle of the episodes, Bolton sings parody songs with clues about the celebrity’s identities. (If the show is renewed for a second season, Deschanel “will definitely get into some duet action,” she says.)

Below, the actress talks about her surprise personal matchmaker, Jessica Day and Nick Miller, and online dating.

Have you always wanted to host a show?

Ultimately I’m an actor first and foremost, so I was like, “I could play the part of a person hosting a show,” which was fun. The whole thing was such a blast. I love something that doesn't take itself seriously, and we definitely did not take ourselves seriously.

So would you say the pandemic inspired you to take this role?

Yes! The pandemic made working so challenging. Traveling for work, and [other] things that aren’t difficult, became extremely difficult — like, friends of mine would have to quarantine for weeks before they could start a show. So when this came along, I was just like, “This is perfect and exactly what I want to be doing.”

Is it true you shot the entire season in one week?

Hopefully you wore flats and not heels!

I wore heels! I was wearing heels.

Oy. Do celebrities and contestants actually go on dates after?

Yeah, love connections were definitely made. I would have liked to have been a fly on the wall. [Laughs.]

Did you feel the urge to persuade celebrities to choose the “right” person, by your standards?

I’m not allowed to persuade in any way because it’s against the law. It’s a federal crime to influence a game show, so I was very aware of that. But there were multiple times when I could tell from someone’s body language that it wasn’t the right person. One guy seemed like he was just there to meet Michael Bolton.

And a very specific question: At the end of each episode, you tell unlucky contestants to “go get some ice cream.” Where did that come from, and is there ice cream backstage?

It was improvised. I was trying to think of something to say to somebody who just got rejected, and I was like, If I got rejected, I would want to get some ice cream. [Laughs.] I said it after the end of one show, and then a second time, and [the team] was like, “We love that, keep saying that.”

Bustle recently spoke to Jake Johnson, who talked about New Girl and Jess and Nick’s relationship. What do you think they’d be up to today?

I’m sure they’d still be together.

If Jess were a celebrity guest on The Celebrity Dating Game, who do you think she would choose: Nick, Winston, or Schmidt?

That’s a really good question. Winston is the most easygoing and respectful. She’d probably pick Winston.

I would pick Schmidt.

Schmidt is literally my husband.

That will be my new Tinder bio: “Looking for Schmidt.” And last question: When you’ve been actively dating, did you find it hard to meet people, or use dating apps like Raya?

More like this
Who Is Nick Cannon Dating & How Many Kids Does He Have?
By Jordyn Tilchen and Radhika Menon
Molly-Mae Hague & Tommy Fury Celebrate Pregnancy Reveal In The Sweetest Way
By Sophie McEvoy and Sam Ramsden
You Can “Fall In Love” At The Resort Where Bachelor In Paradise Season 8 Was Filmed
By Brad Witter
The 'Bachelor In Paradise' Schedule Shifts To 4 Hours Every Week After The Season 8 Premiere
By Brad Witter
Get Even More From Bustle — Sign Up For The Newsletter