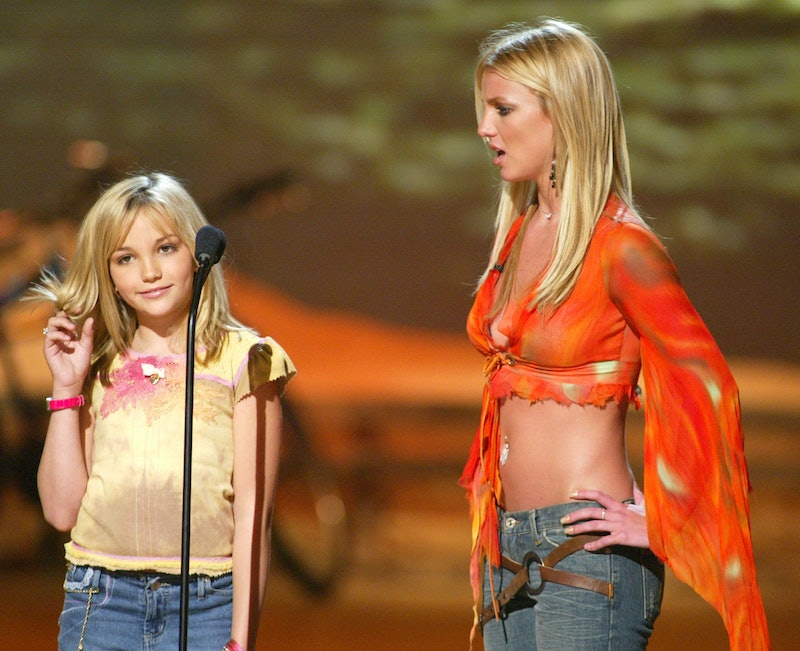 For reasons unknown to me, baring as much midriff as possible was considered the height of trendiness in the new millennium, manifesting in the most ridiculous midriff-baring outfits of the early 2000s. TBH, all early '00s trends kind of elude me as I fail to understand how we ever thought they were fashionable in the first place. It was the era of low-rise jeans, crop tops, and absurd belly button jewelry, all of which led many a celebrity to get the entirety of their bellies out on red carpets and elsewhere. All in the name of fashion.

Don't get me wrong: I'm not complaining about these celebs or their tummies. In fact, I love their commitment to a look that lent no sartorial favors. Even if these celebs were thin, it takes a certain level of bravery to expose as much body as this, IMO, and every single one of these humans looked stunning in my eyes.

These specific looks are early 2000s gold: Absolute treasures of midriff-baring beauty that sum up an era that placed the least amount of attention on style ever. Or at least, an era that made a style out of having absolutely no style. It's a feat only proven by the most ridiculous belly-baring outfits of the times pictured below.

You can expect to see Christina Aguilera on this list more than once. After all, she was arguably the most early '00s style icon ever. This particular outfit, however, sums up how extreme midriff-baring was back then.

I once crowned this look the most early '00s BET Awards ensemble ever and I stand by my statement. This red carpet outfit looks like someone just cut out the middle of a gown and I love it.

I love this hippy dippy outfit from Britney Spears. It was the perfect "boho teen" look for the Teen Choice Awards in 2002.

If there was ever a celeb to rock midriff-baring getups more regularly than anyone else, it was Paris Hilton.

One part denim country pumpkin, one part server of the best looks to ever grace the early '00s, Lil' Kim's early millennium outfits are legendary — and don't forget it.

What's better than one midriff-baring outfit? Three matching, denim ones, of course.

Hey, I did warn you. There was no way Aguilera wasn't going to appear twice on this list. This particular midriff-baring outfit is special because it isn't a crop top, but a top cut out especially to show off the belly button. An interesting design choice if ever I saw one.

The dress that invented Google Images, J. Lo's Versace gown for the Grammy Awards in 2000 was all about showing off that body.

OK maybe I lied about Christina Aguilera ruling this list, because Britney Spears basically had a copyright on revealing your midriff during the early '00s. And what's the best accessory for showing off your belly? A snake, duh.

Shakira's hips deserve more attention than just one hit song. Even in cargo pants, she made sure to proudly display them alongside the rest of her midriff.

In this performance for "Lady Marmalade," Pink promptly reminded me to let go of the midriff-baring trend of the early '00s and focus instead on whatever the hell those trousers were meant to be.

What I like about this look is that someone thought, "Let's take a suit, right, then embellish the area where your pubes should be and open a few top buttons for midriff-baring beauty. That'll look good."

I like this top because it hides the belly button and nothing else. Who designed these clothes in the early '00s and where can I meet them to shake their hand?

When I remember Anastasia's style, all I recall are those oversized, tinted sunglasses. What I should be remembering is looks like these, which managed to be both a long-sleeve tee and a bra at the same time.

How can you wear a lace-up, denim trench coat and still look good? Throw on a pair of Daisy Dukes and only button a few jacket buttons, as presented here by ultimate early '00s celeb Jessica Simpson.

Upon starting this article, I was equal parts disgusted and equal parts in love with these looks. Now that I finish it off, I have to admit I'm 100 percent ready for celebrities to start baring as much of their bellies as possible again. "Trashy chic" was the best trend to ever happen to us all, and we should never forget it.

More like this
Here Are All 703 Outfits Rachel Wore On Friends
By Kat George
The First Trailer For 'That '90s Show' Includes So Many Nods To The Original Series
By Jack Irvin, Alyssa Lapid and Grace Wehniainen
Dua Lipa On YSL Beauty, Plus Her Fearless Approach To Hair & Makeup
By Erin Stovall
Lizzo Is Here To Remind You That Hot Girl Summer Lasts All Year
By Dominique Norman
Get Even More From Bustle — Sign Up For The Newsletter