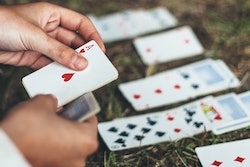 Learning new card tricks, especially ones that are easy but still cool, isn't something that comes naturally to everyone. I'll admit it: I'm not good at any magic tricks. I mean, I can learn things but I am no Neil Patrick Harris. I still feel residual shame from the one time in fifth grade when our teacher made us each learn a card trick that we would perform in front of the class for a grade, and when I screwed mine up in front of the whole class, I sat in a corner and very quietly and melodramatically cried. I tell you this because now that you know how completely inept I am at magic, you will know that when I tell you that this list of card tricks I compiled is super easy, I mean that anybody could do it.

You might be wondering why card tricks are a valuable life skill for you to learn at this point in the game, so gather round, fellow people of the internet, and I'll tell you: You can learn magic to make friends at parties, to get out of speeding tickets, or if you're feeling particularly ambitious, keep mastering the craft until you become the next David Blaine, make bank, and meet a ton of celebrities.

For the first trick in the bunch, we’re starting out easy, hence the reason it’s called “The Easiest Card Trick Ever.” Wow your party guests by letting them shuffle the deck and split it in half. By looking at the fourth card down in one half of the deck, you always ~magically~ know the exact fourth card in the other half of the deck, too.

This one is the same magician as the first one, but a little more complicated. You pull out a "prediction" card at the beginning and split the deck three ways, and your audience will be boggled that the second card in every deck is always the same number/royal figure as the prediction card you pulled aside. This is the OG card trick, so if you’re trying to look like a wizard, you oughta get this one down to a science, er, I mean magic.

This one may also be called “The Easiest Card Trick,” but hey, we promised you anybody could do these, and this one is no exception — literally all you need to be able to do is count out loud. Plus, this one is extra fun, because it actually fools the ~magician~ performing it. If you watched Sesame Street as a kid, you will be able to perform this trick.

Nothing like some good old-fashioned audience participation to get the magic party started, with another OG magic card trick. Ask the audience to pick a card, then shuffle it back into the deck. Wave their hand to get a little magic started, and add a fun factor, then show them the top card — but it's a red herring. It's not their card. Then you reveal by fanning out the deck that all the cards are facing up, except for the very one they put in the deck themselves.

Here's a quick one if you're trying to get your flirt on in 30 seconds or less. Pull this easy card trick out at the next bar or party you’re at. Your volunteer picks a number between 1-10, you shuffle the deck, and then pull however many cards depending on the number they chose. If they chose 7, they look at the seventh card, memorize it, and shuffle it back into the deck. Not that it matters because you already know which card they chose.

OK, so technically this is a card trick "for kids," but it's also the quickest of all the card tricks to learn because it requires zero prep and the actual teaching part of it takes 40 whole seconds. Plus, if kids can do it, you can! What was I even doing in college, anyway?

I'm warning you right now that this one will mess you up a little bit the first time you watch it, because there is some slight of hand involved. But, once you get the hang of it, this card trick is actually not all that hard, and the next few minutes of tutorial are totally worth the mind-boggling reaction you're going to get from the first unsuspecting victim you use this on.

You don't even have to touch the cards on this one, which means there is no excuse not to try this one out! In order for this trick to be successful, you have to rely on your audience member's ability to be able to spell out numbers, so maybe wait before you debut this one at the local daycare.

This guy specifically made this video for people who were afraid of performing in public so that they could learn a card game. Props to him and his baller accent. This is another classic "find your card in a shuffled deck" trick, and comes with the added charm of being "fail-proof."

This card trick is a great way to get a ton of people involved. Ask for three volunteers and they will each pick a card out of three piles. Then, it’s basically a mind reading trick. Your audience will have no idea how you knew, and they’ll have to believe it’s magic.

Even though this trick looks complicated, don’t be intimidated to try out it out, because it is actually the perfect card trick for beginners. Once you get the hang of it, you can blow your family and friend’s minds at the next event.

How on earth did the magician pick the same favorite card as their volunteer from the audience? Well, with this video you’ll learn how. This fun, and mind-boggling, trick will make any crowd wonder, “How did they pick the same card?!”

It’s nearly impossible to get all four aces in a regular card game, so how is it possible to pull them all out by the snap of a finger?! Well, it’s magic, of course. With the “Amazing Aces” card trick, your volunteer will wonder just how you were able to pull the best four cards, instantly, out of the deck.

More like this
8 Epic Must-See Moments To Relive From The Lionesses’ Euros Win
By El Hunt
25 Things I've Reduced My Life To, In Addition To WFH In My PJs
By Ginny Hogan
The Spiritual Meaning Of The August 2022 New Moon
By Nina Kahn
Your Daily Horoscope For August 12, 2022
By Mecca Woods
Get Even More From Bustle — Sign Up For The Newsletter

This article was originally published on Dec. 23, 2014