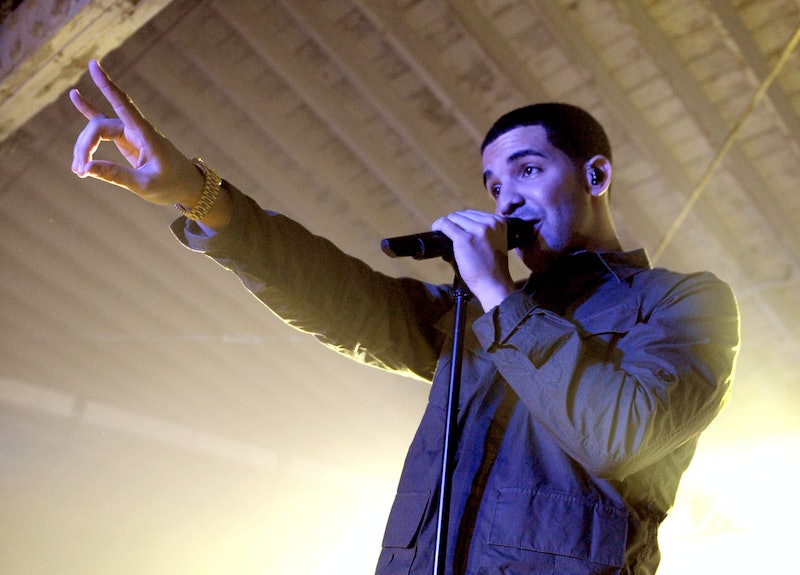 Aubrey Drake Graham, more popularly known as Drake, is the man who won our hearts as Jimmy Brooks on Degrassi and swept us off our feet when he said that we look prettiest chillin’ with no makeup on. Though If You're Reading This it's Too Late has been making people of all genders swoon since 2015, the mixtape is back on everyone’s “recently played” list thanks to — what else? — TikTok.

The “Deep Realization” trend on TikTok features his hit “Know Yourself” — the one where the singer runs “through the six with [his] woes.” In the trending audio, Drake raps the lyrics twice, with “noticeably more hype” on the repetition, per HerCampus. TikTokers are using the line as the backdrop to casually realizing that they’re a doctor now, while others are opening their eyes to the number of kids they raised that weren’t theirs and exactly why they quit dancing. Woes indeed. The trend is making people ask, yet again: What does "with my woes" mean?

At first glance, Drake’s “woes” seem pretty obvious. The album is full of some heavy stuff. He's angry at his parents, his record label Cash Money, Tyga, and, of course, the haters who didn't think he'd make it. Despite the fact that the album is fraught with an almost adolescent angst, Drake manages, once again, both not to alienate his listener and produce some quality lines that resonate with people — even if they have no idea what the hell he's saying. For example, he managed to popularize "The 6" as a nickname for Toronto, even though at first no one had any idea what he was talking about.

Now, knowing what we do about the album, it would make sense that when Drake says "woes" he means "sorrows," "stresses," or "troubles," because that's what the word "woe" means by definition. But a 2014 Noisey interview with Canadian rapper Devontée, who’s worked with Drake, offers an alternate understanding of the phrase:

So perhaps Drake is kind of talking about the opposite thing most people assume him to be talking about. He's could be running through Toronto bogged down with visions of his mama, exes, and haters, or running through Toronto while "lovin’ the crew." His woes could be his fears — or his weapons. The TikTok trend more or less encapsulates this: It celebrates how far the user has come, whether that’s because they’ve been on Disney Channel or their dog is healthier than they are. The deep realization can be both a woe, in the traditional sense, or an example of excellence.

Now, you might be thinking: "Running through the six with my working on excellence" makes no sense. You can't have that word there, Drake!" For those of you with your (extremely reasonable) doubts, suspend all you know about grammar and sentence structure for a moment (because it's a bunch of elitist classist crap anyway). Instead of focusing on what Drake can't do, let’s focus on what Drake CAN do. On Over My Dead Body, Drake was a philosopher and taught us that jealousy is just love and hate at the same time. On HYFR, he was an inspirational speaker and said that working with the negatives can make a better picture. And, of course, on Worst Behavior, he was the rowdy, fun-loving, young person who lives inside all our hearts when he let the world know that he didn't care a single bit and was going to stay on his worst behavior. So Drake has earned some slack for just wanting to work on excellence, even if it doesn't quite make the most sense — most things that become TikTok trends don’t make sense anyway, until they do.

This article was originally published on April 16, 2015