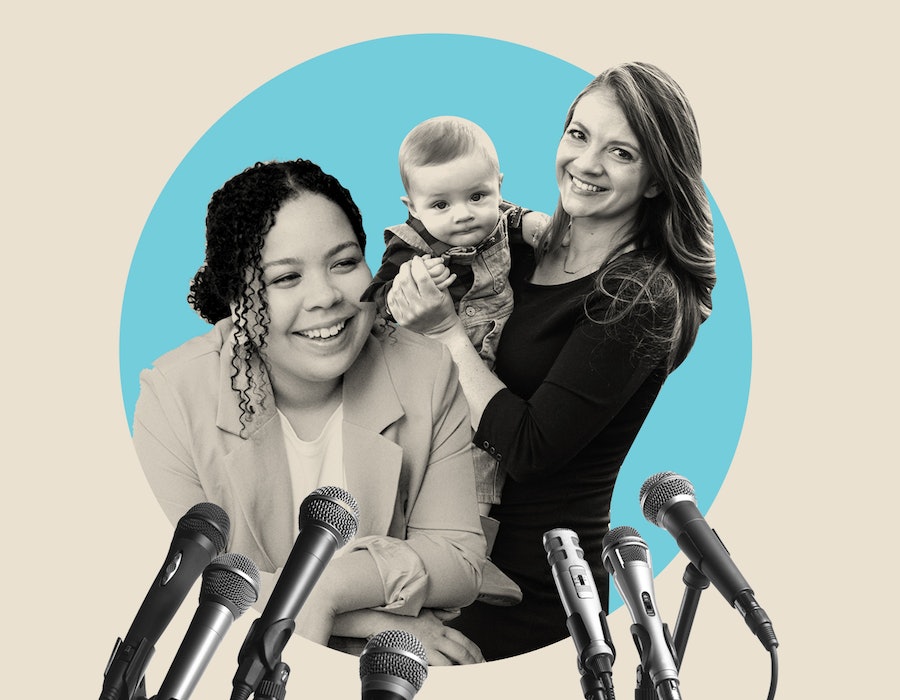 In Bustle’s Quick Question, we ask women leaders all about advice — from the best guidance they’ve ever gotten to what they’re still figuring out. Here, Agua Bonita founders Kayla Castañeda and Erin PonTell share what they’ve learned from running a business built on both sustainability and heritage.

Kayla Castañeda and Erin PonTell knew each other for approximately a month before deciding they’d make great business partners. Castañeda, 29, had been hired at a beverage startup to fill in for PonTell, 31, who was about to have her first child. Only this was in March 2020; before PonTell could come back from maternity leave, the startup had shut down, thanks to lockdown.

“We didn’t have jobs anymore, but we still had a lot of fight left in us,” Castañeda tells Bustle. “We joke a lot — when life gives you lemons, make aguas frescas.”

Thus Agua Bonita — beautiful water, in Spanish — was born. The brand makes canned aguas frescas, a blended fruit drink popular in Mexico and Central America, drawing inspiration from Castañeda’s grandfather, who would make the beverage using fruit from the fields in which he worked. “We thought it was a treat, but it was really a way to make things stretch,” she says. Their version uses produce that otherwise would be discarded and cans, rather than bottles, to make the product more sustainable. It also has way less sugar than traditional aguas frescas, a nod to “new trends in wellness,” per PonTell. Since launching in fall 2020, the two flavors — pineapple cucumber and watermelon chile — both have sold out, and in September, the founders achieved another major milestone: the company became the first-ever Latina-run beverage startup to raise more than $1 million in funding.

Below, PonTell and Castañeda share the lessons they’ve learned from growing a business as female founders, the advice they immediately ignore, and the role models who inspire them.

Other than hydrating well, of course, how do you pump yourself up before you give a big presentation?

Castañeda: Literally every time, I go into it with the mentality that it’s do-or-die. I give myself a pep talk, saying, “If we want to continue our business, we need this much money.” Thankfully, it’s not so do-or-die anymore, but in those first days it was definitely like, “Hey, we need 30 grand, or else I don’t know what we’re going to do.”

PonTell: I jump around a bit before every call to shake it off. And then Kayla and I always text each other that we got this — with lots of emojis.

PonTell: I do a lot of all caps, which isn’t an emoji, and exclamation points. Then the party hat guy.

Ha, we stan the party hat guy. So once you’re done with the big presentation, how do you turn off your brain?

PonTell: I’ve now watched Friends probably 30 times. I play it in the background to zone out.

Castañeda: If I really need a break from the world, I’ll grab a drink with my three brothers or something. Personally, I’d like advice on how to be better at work-life balance. Especially when you're working from home all the time, it’s really hard to draw that line between work and private time.

Business-wise, is there something you need advice on?

PonTell: I keep thinking of very technical things, like how do you transport freight? [Laughing.] This point in growing a business is new territory for both of us — we spent the first year having no money and trying to get a product to market. Now that we actually have some opportunities, we’re asking how to use our capital most efficiently while also growing as much as possible.

Castañeda: A lot of women and minority founders probably struggle with this exact dilemma. If you grow up not having anything, you’re used to running a business on fumes to make it. Then, once you have money, it doesn’t feel right to spend it all. We want to be good stewards of our money. We feel very fortunate, but it’s also a little surreal.

Have you gotten any bad advice starting your business?

Castañeda: “That’s too hard.” Just because something is hard doesn’t mean you shouldn’t do it. Sometimes, that’s exactly what sets you apart from other businesses.

PonTell: We’ve gotten a lot of advice from people who say, “Trust me, I’ve been doing this for 40 years and this is the way it’s always done.” The reason there hasn’t been a lot of innovation in this very specific space — canned beverages — is because people say, “It’s been done this way for this many years, so you have to do it like that” — when that’s not true.

Last question: Who are your role models?

PonTell: I have a cheesy one. One of my best friends from college is one of the youngest female venture capital partners in Silicon Valley. I’ve known her as my best friend for over a decade, but she works on billion-dollar deals all the time. She reminds me that there’s a space in this playground for females and minority females, too.

Castañeda: I would say Dany Garcia. She’s Dwayne Johnson’s ex-wife, and they still partner on a lot of business deals. She’s also a bodybuilder — not that I want to be a bodybuilder, but that requires such dedication and confidence. I really admire how she’s able to balance all of these really impressive deals with her health and her family, all while being a Mexican-American woman in business.