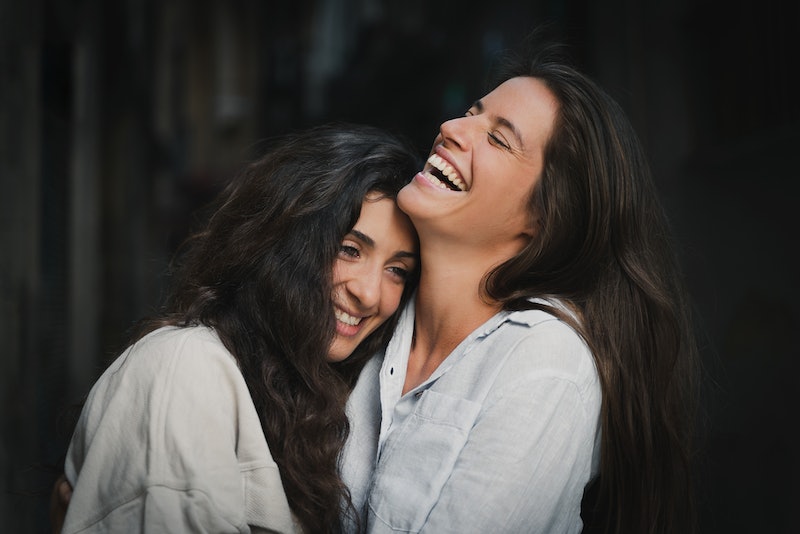 Dating an Aquarius can be both wonderful and confusing. Although they tend to get along with nearly everyone, they can be unpredictable and a little on the cold side. They have no problem sharing their wild thoughts, ideas, and opinions with others, but expressing their feelings isn't something they really do. It’s not uncommon for someone dating an Aquarius to feel like they're dating an emotionless rock. But before you start questioning the future of your relationship, it’s important to understand a few key things about how Aquarius’ mind works. Once you know how long it takes Aquarius to fall in love, you’ll see why this unique air sign is worth sticking with.

"Though often labeled as the emotionally detached one, Aquarius also represents hopes and dreams in astrology," astrologer Clarisse Monahan tells Bustle. "Their idealistic nature outwardly veers more towards social causes and humanitarian issues, but they all have a secret hidden nature that longs for deep connections and love. When they do fall in love, they tend to fall deeply and will do everything they can for the relationship."

It's important to note, however, that Aquarius isn't a very sentimental or affectionate sign. In fact, Monahan says they tend to balk at emotional displays. "So don't expect to be swept off your feet if you're dating a water bearer," she says. Aquarius prefers putting forth an equal amount of effort when it comes to dating. They won't try to court you or pull out all the stops to impress you. Their approach isn't for everyone, but you will get an honest and equal partnership with them.

With that said, it does take some time for an Aquarius to fall in love. As a fixed sign, loyalty and security are extremely important to them. Because of this, they need to be sure that the person they're giving their heart to is going to keep it safe. According to Monahan, Aquarius can't stand the superficial and need to connect with someone intellectually. They also tend to favor people who have progressive ideals like them. Many times, Aquarians will find themselves falling in love with a friend or someone in their social circle who shares their interests.

Now, getting an Aquarius to actually say those three little words can take even more time. According to astrologer Kristina Semos, Aquarius can have an "immediate affinity to you," but it can take a while for them to actually own up to the fact that they're in love.

"You may be living together or otherwise committed, and they may still say things like, 'I think if I fell in love, it would feel like this,'" Semos says. "When this happens, let them go into their mental abstractions and don't take it personally when they say something that's emotionally clueless." It doesn't mean that they don't actually love you. They're just very logical and emotions tend to make them uncomfortable.

Once you get over the initial bumps in the road, being with an Aquarius can be amazing. According to Semos, an Aquarius in love is like having your best friend around all the time. They'll make future plans with you, they'll always be there for you when you need it, and they'll always fascinate you with their ideas. Every now and then, they may even surprise you by showing you their softer side. Even if they aren't great with romance, they will show you how much you mean to them in their own unique and special way.

If you want to keep your relationship with an Aquarius moving forward, the most important thing to do is give them space to figure things out for themselves. Let them have their own friends and hobbies that are separate from the relationship. Above all, don't pressure them for a label or a commitment. As Semos says, "If they show up every day, that is commitment to them."