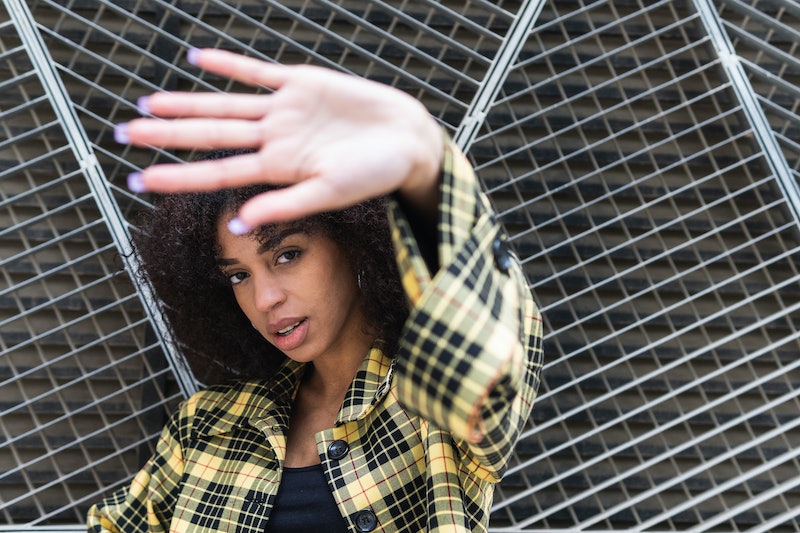 If your birthday falls between approximately March 21 and April 19, then you’re an Aries — which means you are energetic, passionate, and a true leader. Of course, on the other side of this cosmic coin is Aries’ impulsive streak and lack of patience. Watch out for that hot temper! Everyone born under the sign of ram has lots of exciting personality traits to be proud of, but knowing Aries zodiac signs’ biggest weaknesses let us know what to look out for, too.

As a cardinal fire sign, Aries are great at zealously taking initiative. However, burning so hot and bright can sometimes make it hard for Aries to sustain their energy and follow through on everything they start. Before we start bagging on Aries too hard, though, remember that there are strengths and weaknesses associated with every zodiac sign, and none are better or worse than any other. Plus, we all have every single sign present in our astrological birth charts, whether there are planets there or not — so Aries zodiac sign strengths and weaknesses are an important piece of all of us in some way.

Whether or not you’re an Aries, understanding Aries zodiac signs’ biggest weaknesses can help you work through the cosmic baggage in the Aries-ruled area of your birth chart.

As one of the passionate fire zodiac signs, Aries want to follow what’s in their heart at all times. Their tendency to jump into things head-first is part of what makes them so exciting to be around, but impulsive Aries can sometimes get into trouble if they make all their decisions on the fly, without thinking things through.

2. They Have Hot Tempers

Aries are ruled by the aggressive planet Mars (aka the warrior planet), so it makes sense that they can be quick to anger. These fire signs are known for having hot tempers, and can easily go from chill to shrill if someone pushes their buttons. If an Aries is feeling testy, they should take some deep breaths to ensure they don’t fly off the handle.

3. They Can Be Argumentative

One admirable thing about Aries is that they’re not afraid of a little conflict — they’ll speak their mind and share their opinion without sugarcoating it, no matter whose listening. But while it’s great to be assertive and have healthy debates with people, Aries should resist the temptation to stir the pot and start arguments for fun.

Patience is a virtue, but it’s not one that Aries was blessed with. These fireballs of energy are known for blazing into new endeavors and doing things quickly, but this can also manifest as a serious case of impatience. It’s important for Aries to remember that not everything (or every person) is going to move at their high-powered speed.

Aries are one of the cardinal zodiac signs, so they excel when it comes to taking initiative and coming up with new ideas. Unfortunately, this fast-paced flow of energy makes Aries eager to blurt out whatever’s on their mind and share their every thought as soon as it comes to them — even if someone else is in the middle of a sentence.

6. They’re Competitive To A Fault

Aries’ ruling planet is Mars, which is named after the god of war — so it’s no surprise that this zodiac sign takes competition seriously! Aries love to win more than just about any other sign, but their determination to get ahead can sometimes make them overly competitive. It’s important for Aries not to pit themselves against others or turn something lighthearted and playful into an aggressive battle.

It’s true: Aries get a thrill out of playfully arguing with people, and they aren’t afraid to push some buttons. However, this mischievous tendency to spark debates can sometimes devolve into them playing devil’s advocate in hopes of making a conversation more edgy and exciting. It’s great to speak your mind, but making points you don’t even agree with puts you on a slippery slope.

8. They’re Focused On Themselves

Aries is associated with the first house of the zodiac, which is the house of the self and the ego. Because of this, Aries are driven and self-motivated — but can also come off as overly-focused on their own wants, needs, and endeavors. Aries should consciously avoid selfish behaviors and take time to consider how others are feeling.

9. They Can Get Cranky

As the first sign of the astrological bunch, Aries are the official babies of the zodiac. This gives them a fresh perspective on life and loads of beginners’ luck, but it also means they can get cranky if they don’t get what they want. Instead of pouting or throwing a tantrum to get their way, Aries should work on their communication skills.

10. They Resist Help From Others

Aries are naturally independent spirits who pride themselves on being self-made. That’s why it can be hard for them to ask for or accept help from others, even if they could really use a hand. But every good leader needs to learn to delegate, so Aries should check themselves if they start getting too stubborn or prideful.