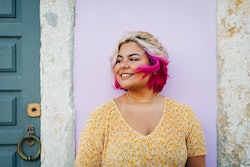 If you've dabbled in astrology, then you know there's way more to this practice than just horoscopes alone. There are the 12 zodiac signs in astrology, each with unique energies, qualities, elements, and strengths attributed to them. And the modalities in astrology (which are comprised of cardinal signs, fixed signs, and mutable signs) are three major categories into which all zodiac signs are divided — and they can tell us a lot about how we express ourselves in the world.

The three modalities in astrology (also known as quadruplicities, as there are four zodiac signs in each group) represent the unique ways each group of signs expresses their energy, reacts to circumstances, and operates in the world as they move through life. "The modalities are another way to break down signs and elements," astrologer Lisa Stardust, tells Bustle. "They represent the sign and element’s ability to move and evolve with time."

Duplicities are not to be confused with elements in astrology (which are fire, earth, air, and water), although these are both systems in which the 12 signs are categorized. Elements represent certain qualities and motivations attributed to a group of zodiac signs, while modalities represent the manner in which those particular qualities are expressed. That said, each modality contains one sign from each of the four elements and each element contains one sign from each modality — meaning that the energy is evenly distributed.

How can you spot a sign based on their modality? "Cardinal signs are always moving on to the next project, fixed signs are usually stuck in completing projects, and mutable signs can be uncommitted as a result of their relationship to the modalities," Stardust says. For example, while all four fire signs are known for being passionate and action-oriented, they'll each express that vibe differently based on their modality. For instance, cardinal fire sign Aries is a motivated self-starter, while fixed fire sign Leo channels its passion into hard work and loyalty.

When something is described as cardinal, it signifies that it's both fundamental and important — and that's the case when it comes to the four cardinal signs of the zodiac. "Cardinal signs are the 'initiators' of the zodiac," says Stardust. "They represent a spark or idea. They also signify the beginning of the season." All four of the cardinal signs could be described as the zodiac's "ideas" people. While they may not have an easy time completing every endeavor they start, you can count on them to get things going and set a solid foundation. The cardinal signs are visionary — they're able to make things out of thin air, and swiftly embrace new beginnings and change.

If the cardinal sign energy kicks butt at kicking things off, then we could say that fixed signs of the zodiac come in with their eyes fixed on the prize. These signs are here for the follow-through. "Fixed signs are the 'doers' of the zodiac," explains Stardust. "They carry out the ideas manifested by the cardinal signs [and] do all the work needed to complete the task at hand." Each of the fixed signs are different, but they're all laser-focused, hardworking, and great at coming up with (and sticking to) a plan. These signs have a knack for identifying exactly what needs to be done, and then doing it.

Because the sun season of each of these signs falls right smack in the middle of each meteorological season, the energy of the fixed signs is focused on momentum and dedication. Fixed signs strengths come out when they're in the thick of something and fully submerged. Without a plan, some might drown in the intensity of this energy — but the fixed signs can be relied upon to push through with steadfast dedication and capitalize on the cardinal signs' ideas and make them reality.

Let's recap: Cardinal signs start things while fixed signs turn those ideas into solid plans — but the mutable signs of the zodiac swoop in to complete the endeavor and embrace change. "Mutable signs represent the end of each season and the finality of a project or task at hand," Stardust says. "They are flexible due to their understanding of change." Things don't always go according to plan, but mutable signs can handle the unexpected shifts. Their changeability and adaptability shines when faced with endings, challenges, or shifts. Whether things end the way we want them to or not, mutable signs have the power to put a thoughtful, intelligent, and positive spin on any situation, bringing it to a natural conclusion.

The sun season for each mutable sign takes place during the final month of each meteorological season — meaning that as the sun leaves each of these signs, a whole season ends, too. That energy is fully reflected in the mutable signs' ever-adaptable ability to change form and accept things as they are.

This article was originally published on Dec. 4, 2019