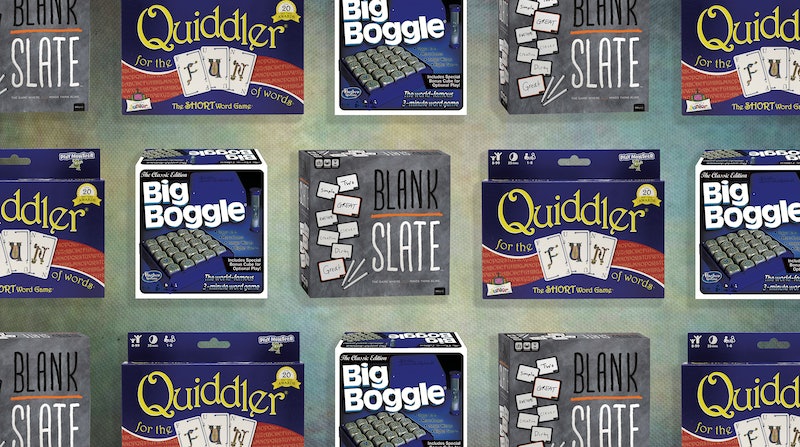 Whether you want to brush up on language skills or show off your vocabulary, the best word board games put your knowledge of words to the test by requiring you to spell, guess, or decode words. Not only should you pick a game that sounds fun to you (maybe you won’t want a spelling game if you don’t enjoy spelling!), you’ll also want to take into consideration the game’s play time, which can range from a couple of minutes to 45-plus minutes for a longer game that’s much more involved. And don’t forget to take note of the number of players required to ensure you have the right number of participants for the game, too; there are even some board games that are fun to play solo.

Unlike intense adventure board games or creepy mystery board games, word board games are usually light hearted, simple to learn and play, and family friendly. You should still always take note of the manufacturer’s suggested age range, though, particularly if you’re interested in a party game where the age recommendation may be a bit older due to adult content. The vast majority of word games are competitive, meaning they pit players or teams against one another in order to be victorious. However, there are some word games that are played cooperatively — aka players must team up towards a common goal to win — so that’s another option.

The word on the street is that these eight word board games are seriously entertaining. They all have high ratings on Amazon, so you can’t go wrong by adding any (or a few) of these picks to your game night rotation.

A favorite board game in my home and on Amazon — it has a whopping 4.8-star rating overall, among 16,000 and growing reviews — Codenames from Czech Games is clearly worthy of the top spot on this list. Quick to learn and easy to play, the word board game is the perfect pick for both new and returning players since each game ends up being totally unique and still competitive. The game is played in teams, and each team is led by a spymaster who gives one-word clues to help teammates to guess their team’s words on the board. Sounds simple, right? However, there’s a catch! The spymaster needs to do this while avoiding the other team’s words, as well as the dreaded assassin word that will end the game instantly. The first team to successfully reveal all of their team’s words wins the game.

This pick is intended for groups (in my opinion, the more players the better), however Codenames also comes in a two-person version.

Enthusiastic Amazon review: “This game is incredible! Great fun for just about any group, including various ages, gamers and non-gamers alike. People who don't have the patience to learn a new game will fall in love with Codenames! Super fast to learn, and fun for everyone to join in without individual competitiveness. The one consistent comment that the clue givers invariably utter is "I can't link these words at all!". Yet, when they put their mind to it, they ultimately do!”

When you think “word board game,” Scrabble from Hasbro Gaming likely comes to mind, since it’s a classic that has remained super popular for years. Unsurprisingly, this game is wildly popular on Amazon, with a 4.8-star rating overall, among 12,000 and growing reviews. The competitive board game requires players to take turns spelling out words on the game board using their randomly selected letter tiles (there are 100 of them in the bag). Words get scored based on the value of the letter tiles as well as bonuses on the board. The player with the highest total at the end wins the game.

Reviewers on Amazon confirm that Scrabble is very easy to learn and play. The game length varies, but it’s usually not quick.

Enthusiastic Amazon review: “If you haven't played Scrabble before, you are missing out! It's such a fun word game that [really] makes you think and stay engaged (if you want to really be competitive and play). It's fun to play with just one other person, or with a group. This one was good quality and will probably last a very long time. It comes with a nice bag for the tiles. All you need is a notebook and pen to keep score! Buy it!”

3. A Word Game That Can Be Played Solo

Play it alone or with a big group (up to 8 players) — either way, Quiddler from SET Enterprises will be a total hit. The word board is played in rounds, and the goal is to arrange all of the cards in your hand into one or more words. Utilize high-point letters and a variety of bonuses to increase your score. The winner is named at the end, and the player with the highest score is the ultimate champ.

The game takes about 35 minutes to play, but Amazon reviewers confirm that it’s so fun and fast paced that the time will fly by.

Enthusiastic Amazon review: “Great game for family fun, especially if you love word games. Play alone or with up to 8 players! We love that the game is relaxed, but faster than Scrabble, which can take hours.”

4. A Highly Rated Party Game Where You Have To Decode Words

What Do You Meme? Incohearent
Amazon

Get ready for a party game that’ll leave you in hysterics. Incohearent from What Do You Meme? is easy to learn and great for large groups (think four players or more) who enjoy playful competition. To play, the rotating judge flips the timer and holds up a card. On the judge’s side of the card, they see the real word or phrase. But on the other side of the card, the players see a gibberish phrase that needs to be decoded. The first player to solve the phrase wins the card, and the first player with 13 cards in their possession wins the game.

Incohearent is intended for those ages 17 and up because it contains mature content, though thankfully, the cards are color-coded by category so you can skip all the cards in the provocative category (colored red) if needed. Some reviewers report that Incohearant makes a great family game sans red cards.

Enthusiastic Amazon review: “I love it. This is the kind of game that everyone can play, and that brings people together at a party. The cards range from the obvious to the obscure, and the answers are creatively disassembled, without losing their phonetic integrity. Not as easy to do as it sounds.Such a fun game to play. I HIGHLY recommend it.”

Word games are typically played competitively, but that’s not the case with Letter Jam from Czech Games. The basic premise of the game is that players have to give word clues in order to help fellow teammates unscramble and figure out their secret words, while also trying to figure out their own at the same time. Reviewers on Amazon indicate that the game is more complex and involved than many other word games (after all, it does take about 45 minutes to play), but they also report that once you get past the learning curve, it’s loads of fun.

Enthusiastic Amazon review: “This game is clever and fun to play. It may take a little bit to put yourself into scrabble/spelling mode, but once you get going, it is easier and easier and more and more enjoyable. I like the fact that it is co-operative, so you are all in it to win it.”

6. A Compact Word Game That Can Be Played In Large Or Small Groups

Big or small groups will simply have a ball with Bananagrams, the word-forming game where players must race against each other in order to build crossword grids using their letter tiles. The first person to use all of their letters wins the hand, so long as they don’t accidentally use a proper noun, an abbreviation, or another unacceptable word. “This has even won over friends who typically don’t like board games because it’s so fast paced,” one Bustle commerce editor raved.

Bananagrams is beloved on Amazon with a whopping 4.9-star rating overall, among 8,000 and growing reviews — with many reviewers specifically mentioning that it has Scrabble-like vibes, but since everyone works on their own words, there’s never that lull while someone tries to figure out their next move.

The game comes in a compact banana-shaped case, so it’s perfect for taking on the go. While this version is suitable for up to 10 players, Bananagrams also is available in a double version for up to 16 players.

Enthusiastic Amazon review: “My husband and I love this game! It's great for just two people or a big group! Everyone should have this game! [...] Plus I love games that don't require a big box. We store this in a kitchen drawer.”

7. A Party Game Where You Have To Guess The Word Others Are Thinking

Great minds think alike... well, at least that’s the premise behind the party game Blank Slate by USAOPOLY. Easy to learn and quick to play, the word game requires players to write down a word that they think best completes a variety of different phrases. But here’s the tricky part: You need your response to match another player’s responses (without giving them a single hint) in order to score points. You get points for matching words (and the most points for matching with just one other player). The player with the most points at the end will be victorious.

Enthusiastic Amazon review: “It’s a very easy game to play, and lots of fun. Surprising how many times there was no match - especially when you were sure it was the obvious word. Great fun!!!”

8. A Word Game That Takes Just Minutes To Play

If you’ve never had the chance to play this classic word board game, you’re truly missing out! This pick from Winning Moves Games is actually the big version of Boggle, with a five-by-five letter grid for even more word-forming fun. To play, players have just three minutes in order to search the board and write down words of four letters or more. Points are tallied at the end, and the player with the highest score is dubbed the winner.

Boggle is easy to learn and lasts just minutes, so you’ll definitely be able to sneak in several rounds during your next game night.

Enthusiastic Amazon review: “The product is sturdy, well constructed, and easy to use. It is also great fun! Players really have to work on vocabulary skills to beat the best person playing, and with the added double-letter cube, this is far better than original Boggle. [...] I highly recommend this game for anyone over age 8, but especially for high-school and older. This is totally worth the price.”

More like this
The 6 Best Nespresso Machines For Iced Coffee
By Megan Gray
The 5 Best Printers For Cricut, According To Crafters
By Maria Cassano
The 5 Best Sheets For Your Purple Mattress, According To Reviewers & The Brand
By Vanessa Spilios
People With Beautiful Homes Secretly Swear By These Home Upgrades That Are Super Cheap
By Julie Peck
Get Even More From Bustle — Sign Up For The Newsletter