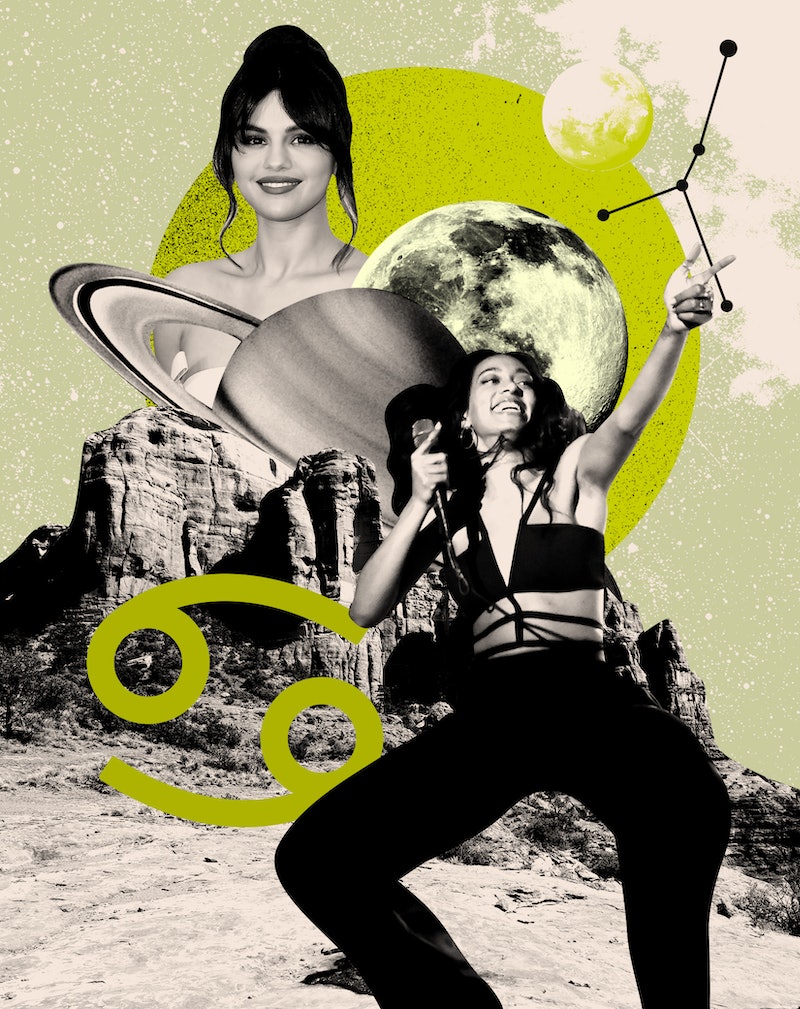 Sharing the same zodiac sign as another person doesn’t automatically mean you’re meant to be besties. In fact, many of the zodiac’s crabs feel strongly that June Cancers and July Cancers may as well be washing up onto two totally different cosmic shores. Everyone’s birth charts are unique, as the placement of the planets will vary based on the year, day, and even minute that we’re born — so it makes sense that not all Cancer zodiac signs would have similar personalities. But are there any actual astrological differences between June Cancers and July Cancers, or is that all in our heads?

There are lots of factors that can explain why people who share a zodiac sign can be so unalike. Sun signs are certainly an important piece of our astrological makeup, but our birth charts are made up of a lot more than just one sign. So while almost everyone born between June 21 and July 22 is a Cancer sun, their moon, Mercury, Venus, Mars, and rising zodiac signs could be completely different — meaning they’ll likely share some core Cancer qualities, but may relate to people, express their thoughts, and go after their goals in contradictory ways.

That said, there’s another major astrological concept that may explain the differences between June Cancers and July Cancers specifically, and that’s a zodiac sign’s decan. Each sign is divided into three decans, and depending on what decan a planet is in, it’ll express its energy differently. These subdivisions are based on degrees in astrology. Each sign takes up 30 degrees of the zodiac wheel, so the first 10 degrees of a sign are assigned to the first decan, the second 10 make up the second decan, and the last 10 go to the third decan. The sun moves about one degree per day, so it works out that all June Cancers are first decan Cancers, while most July Cancers (aside from those born on the first day of the month) will fall into either the second or third decan — which could justify some of the variances.

Using decans as our guiding force, let’s dive into the differences between June Cancers and July Cancers, which can help us understand the zodiac’s cardinal water signs in a new and more complex light.

June Cancers Are The Most Quintessential Cancers

Cancer is the singular sign ruled by the moon, aka the planet of our emotions, homes, and families. But most July Cancers are second or third decan Cancers, meaning they have a secondary planet that influences the way their sign’s energy manifests. Because June Cancers are solely ruled by the moon, they tend to embody the most quintessential of Cancer strengths and weaknesses. Some of the most well-known Cancer zodiac traits include being sentimental, comfort-seeking, and compassionate — and this describes most June-born crabs perfectly.

Navigating the shadowy, intangible world of emotions comes easily to Cancers, but those born in July tend to have an even more mysterious quality about them. That’s because they’re either second and third decan Cancers, meaning either Neptune (planet of illusions) or Pluto (planet of transformation) is assigned as their cosmic co-ruler. Both of these planets bring an intriguing sense of enigma to Cancer’s vibe — as powerful Pluto rules all things subterranean and Neptune rules all things mystical. July Cancers are a little harder to read, thanks to these dreamy and secretive influences.

As one of the water signs, all Cancers lead with their feelings and experience them deeply — and this is even more true of June Cancers. As the only decan of Cancer that’s purely ruled by the emotional moon, these crabs are often even more sensitive, tender-hearted, and prone to being swayed by their sentimentality than their July-born counterparts. Their endless emotional capacity and caring is like their superpower, but it also gives them an added dose of Cancer’s classic moodiness.

July Cancers Are Protective Of Their Feelings

Cancers are represented by the symbol of the crab — so when they feel too vulnerable, they’ll often retreat into their crab shell and keep everyone but their closest comrades at arms’ length. This is especially true for third decan Cancers (all born in mid-July), as their co-ruling planet is Pluto. Pluto is the most distant (and intense) planet of the bunch, so its influence can make July-born Cancers extra defensive about their feelings and protective of their sensitive hearts. It may take longer to get to know them, as they tend to keep their guard up until they feel fully comfortable with others.

The moon in astrology is often thought of as a mother-like figure, given its associations with home, comfort, and protection. And because first decan Cancers are arguably born the heaviest dose of the moon’s maternal vibes, they’re often even more nurturing than the average crab. These natural-born caretakers excel when it comes to creating safe spaces where people can be vulnerable and soft. They know exactly how to console others’ pain and can make anyone feel loved — whether it’s by offering a listening ear, a healing hug, or a big plate of comfort food.

Being compassionate is one of Cancer’s most endearing and powerful traits. But when it comes to picking up on other people’s unspoken emotions and subtle sentiments, July-born Cancers have an almost otherworldly sixth sense. Second decan Cancers (all born in early July) are co-ruled by mystical planet Neptune, giving them a stronger intuition than most crabs. For these empathetic Cancers, their feelings and other people’s totally blend together. And while this can be a gift, it’s also important to set boundaries to avoid becoming codependent or feeling responsible for curing other people’s pain.