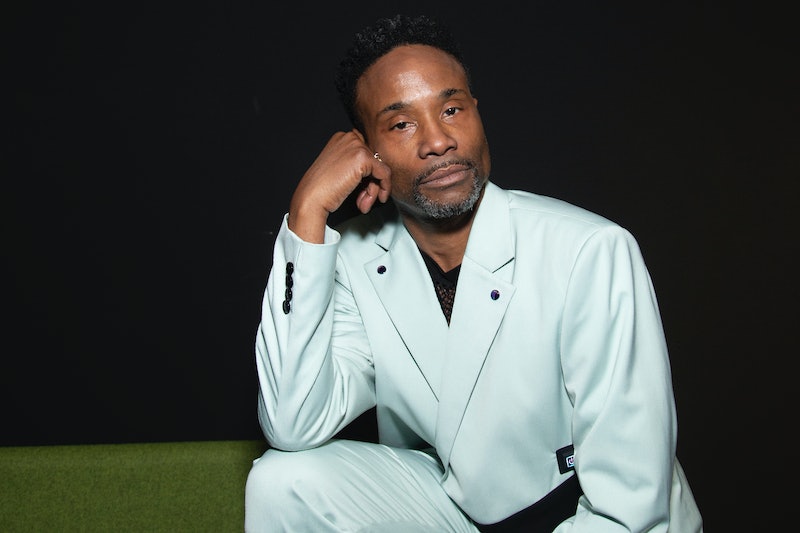 Billy Porter has had a busy 2020. Between opening the Oscars with Janelle Monáe, breaking down gender barriers on Sesame Street, and gearing up for the forthcoming live-action remake of Cinderella, Porter relies on a self-care routine to stay zen during a hectic schedule — a routine was non-existent just a few years ago.

"The 2016 election coupled with my career exploding in the way that it has convinced me to pour some of that energy back into myself, because when I focus on my self-care, I feel a lot better," says Porter, who's partnering with Clorox for their Scentiva's Spring Queening campaign. Here, Porter tells Bustle what's not allowed in the room when he's chilling out and what he really thinks about your memes of his Grammy's hat.

On The Self-Care Routine That Clears His Mind

Even though Porter commands attention on the red carpet with his extravagant looks, including the unapologetic tuxedo-gown he wore to the 2019 Oscars, his uniform at home usually consists of a robe and slippers while he's cooking up a homemade meal for his husband. The Pose star finds zen through cleaning his home, accompanied by a dance-worthy playlist. "There's something about decluttering the space that declutters your mind — that's the self-care part," Porter says.

Despite being in show business for decades, the Broadway veteran has become a household name since starring on Pose, so using face masks for a camera-ready glow are now part of his self-care routine. Porter is also a fan of the Theragun Percussive Therapy Massager. "I got a Theragun in a gift bag recently — it's really high pressure. Just shoot yourself with the Theragun while wearing your face mask," he joked.

On His No Cell Phone Rule & Going Viral As A Meme

One thing Porter doesn't have to worry about is digital detoxing since he has a zero-tolerance policy around cell phones when he's practicing self-care — "Put the phone down in the other room!" he says. While he also keeps his distance from social media, he's no stranger to going viral.

When Porter walked the 2020 Grammy Awards red carpet in a bright turquoise jumpsuit and matching remote-controlled fringe hat, he instantly sparked a new meme. Yes, he saw all of the memes that flooded Twitter and Instagram. "I was like, 'All right, y'all got jokes," he says. "Good for you." His favorite take? "Me as a lamp in Beyoncé’s house."

At 50, Porter says the takeoff of social media is hilarious to him. Just don't ask him to create a meme and caption it: "I don't know how to do it," he says. "My mind doesn't think that way. I am the embodiment of the meme."