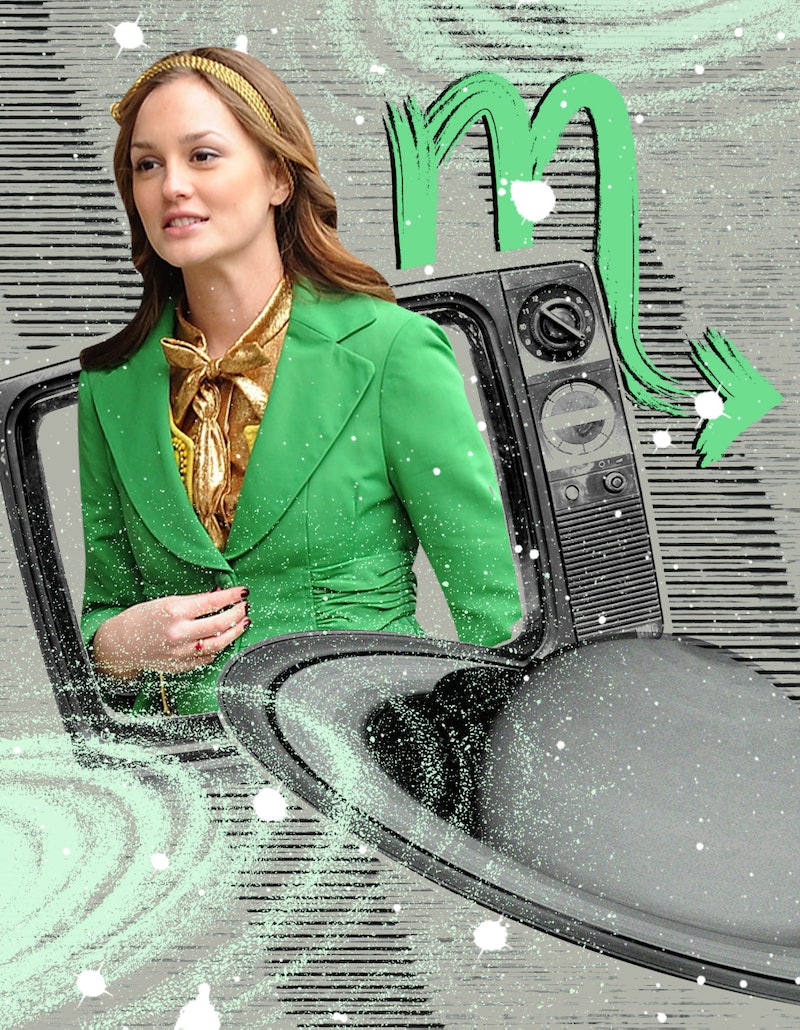 In Astrologically Speaking, astrologers make their case for your favorite character's zodiac sign, based on specific scenes, quotes, and even fashion choices. Here, astrologer Alexandria Lettman explains why Blair Waldorf of Gossip Girl is most definitely a Scorpio.

The Gossip Girl reboot finally graced our screens this month, taking us on a wave of nostalgia to the glamorous and scandalous lives of Manhattan’s elite. Though we probably won’t be seeing Blair Waldorf, the striking protagonist from the original series, this time around, she sticks out in my mind as someone with iconic Scorpio traits.

The original Gossip Girl series follows the self-professed Queen B Blair and her prestigious upbringing on the Upper East side. Blair’s enthralling life as a New York socialite and her roller coaster romance with her on-again, off-again billionaire boyfriend, Chuck Bass, made her a captivating character with whom we have a love-hate relationship. It was always intended for Blair to be a romantic yet powerful and unforgiving Scorpio — her birthday is written as Nov. 15 in the novel of the same name. But there’s far more to her character in the television series that confirms this to be her sun sign. As an astrologer, here are three reasons why I am certain that Blair is a dynamic Scorpio.

1. Blair Always Gets What She Wants

Whether it’s going to Yale, becoming a fashion designer, or maintaining her social status, Blair is always determined to succeed. Scorpios carry the energy of the fixed modality, making them dedicated and direct. Blair, however, takes this to the extreme in everything she does. When her chances of going to Yale was threatened by her classmate and academic rival, Nelly Yuki, Blair’s primal and intimidating drive to succeed leads her to sabotage Nelly in Season 1, Episode 15, “Desperately Seeking Serena.” But it wasn’t enough to pressure her rival ahead of her SATs — Blair steals the batteries out of Nelly’s calculator just to cement her failure!

Although Blair’s villainy is absolutely dramatic, it demonstrates how she, a Scorpio, is often so blinded by ambition that she lets her passion and fears of failure get the best of her. In addition, Scorpios have a fiercely competitive edge and it’s no secret that Blair lets her many rivalries with Jenny, Poppy, Juliet, and countless others push her to succeed.

“You need to be cold to be queen.” Blair says it best herself in Season 2, Episode 25, “The Goodbye Gossip Girl.” When coaching Jenny Humphrey on what it takes to rule the glossy hallways of Constance Billard School, Blair proclaims, “You can’t make people love you, but you can make them fear you.” Scorpios have a dark side, which can be credited to their dual planetary rulership between Pluto and Mars. These energies equip Scorpios with the deep awareness of the shadows of life and resilience needed to maintain a position of power.

It’s no secret that Blair does some unfavorable things to stay in the spotlight and racks up a huge list of enemies along the way. She ridicules her schoolmate, Dan, for being “poor,” bullies a teacher into giving her higher grades, and even spreads rumors about her best friend, Serena, to destroy her reputation. But despite her struggles with fear, jealousy, and greed, there’s one thing that we can’t discredit Blair for: As a Scorpio, she’s inherently self-aware and takes ownership of who she is — the good, the bad, and the ugly.

3. She Rarely Shows Her Sensitive Side

Scorpios are infamous for being mysterious beings. It’s not that they don’t have a soft, emotional side (it’s quite the contrary, actually); they just value their privacy. A Scorpios’ inner sensitivity can be largely credited to them belonging to the water element. If this wasn’t deep enough, Scorpios also have a complex and impassioned nature that’s often kept to themselves or expressed to a select few. Blair perfectly embodies this energy; she’s emotionally intense in a way that was often misunderstood.

Despite choosing not to be vulnerable with all of her family and friends, there was one person Blair undoubtedly trusted above anyone else: her devoted maid Dorota. Whether it’s crying over her turbulent romance with Chuck or confessing to being pregnant, Blair always feels an ease to be honest and open with Dorota about her feelings.

With Gossip Girl, the mysterious blogger voiced by Kristen Bell, combing the streets of Manhattan for juicy secrets to expose, it’s no surprise that a classic Scorpio like Blair would be so distrustful of everyone in her inner circle. Blair perfectly embodies the duality of being a Scorpio; she’s got a hardened exterior and a sensitive soul. Through her dramatized scheming and thirst for revenge, Blair proves that Scorpios make fierce and compelling main characters.