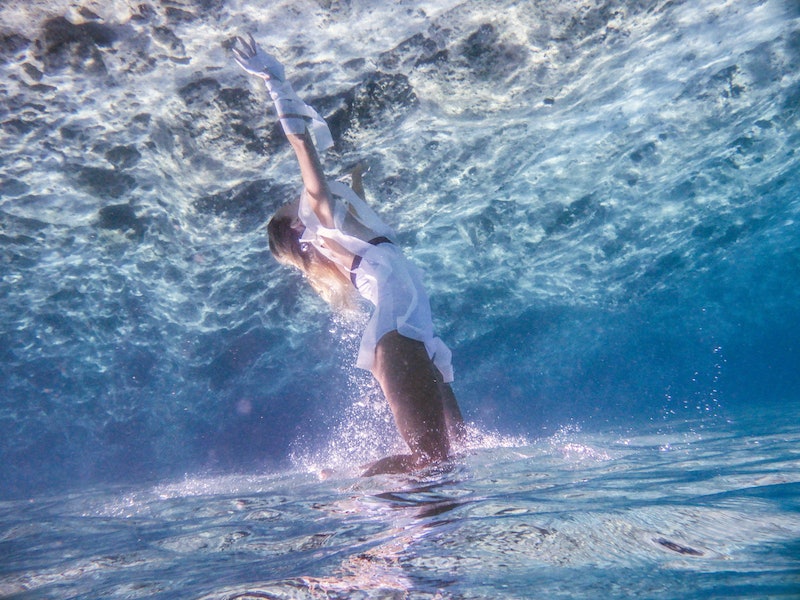 If you’re a fan of all things esoteric, get ready for this. According to the age-old practice of numerology — aka, the study of numbers — you can calculate how many past lives you’ve lived using the digits in your birthday. What’s more, the resulting number, known as your Life Path Number, can also help reveal and explain your personality, goals, relationships, and even the future.

“In numerology, your Life Path Number is the the single digit that your birth date (when added together) is consolidated into,” Tracee Dunblazier, a spiritual empath and author of Conquer Your Karmic Relationships, tells Bustle. And according to intuitive, medium, and spiritual development teacher Alison Shine, this number represents how many lives you’ve lived and your current life’s purpose.

“Numerology can help guide you by giving you a framework to discover deeper meaning in your life,” Shine says. “They are metaphysical tools that can give you a glimpse into your purpose, direction, and history of your soul. You can use numerology to help you make important decisions, understand your true potential, and reassure that you are on the right path.”

As for seeing into the future, that’s all thanks to the ~vibe~ associated with each number. “Numerology can help us to understand how to predict events and behavior by teaching us that everything in our world has a vibration, that unless it is escalated or reduced, the result is consistent to the energetic trajectory it is on,” Dunblazier says. “Stated differently: If you don't change, your path won't change, therefore the [same] result can be expected.”

Where Does Numerology Come From?

Numerology has roots in many cultures. According to astrologer Constance Stellas, the science of numbers was used in the Egyptian Ritual of the Dead, the Indian Vedas, and the Hebrew Kabala. It’s also mentioned in the Bible and was taught by Moses, she says. Today, we mostly attribute the idea of numerology to Pythagoras, a Greek mathematician born around 559 B.C. “Pythagoras and his followers, known as the Pythagoreans, also studied music and philosophy due to their connections with mathematics,” Shine says.

For one, they discovered a relationship between numbers and the resonance of each musical note, which is why it is believed that each number carries a unique set of properties that can be used to describe other areas of life.

They also found that, if you add up a series of odd numbers that begin with 1, the total will always be a square number. As Shine says, “This means that everything in our universe is made up of numbers and can be described with numerical values.” So let’s jump into some math, shall we?

How To Calculate How Many Past Lives You’ve Had

While the math here seems tricky at first, it’s actually pretty straightforward. The goal is to keep adding the individual digits in your full birth date (month, day, year) until you get a single number, which is your Life Path Number.

Next, move on to the year. If you were born in 1992, add the digits 1+9+9+2 together to get 21, then reduce that down even further by adding 2+1 to get the single digit of 3. From there, add all the digits in your birth date together and keep going until you get single number.

The numbers 11, 22, and 33 are considered master numbers in numerology. “You will always reduce down to one digit, but the master number adds more to the message, if you will,” Dunblazier says. “Master numbers address universal dynamics at play in your life that are contributing to your life path or destiny.” Think of it is as an extra dose of the single number.

Past lives, or the belief of reincarnation, refers to the process of a soul going through various incarnations on Earth, each time building on what was learned in the preceding lives. “Each lifetime gives us a new perspective to see the human experience from a new angle,” Shine says. “As our souls gain more and more life experience we ascend into higher stages of consciousness.”

As with all things under the mystical umbrella, it’s tough to land on one specific “answer” or really know for sure how many past lives you’ve lived, or if there were any at all. Dunblazier says you may have thousands of past lives, with Life Path Numbers serving as a way to reduce a vast idea down to something more digestible.

Another theory, known as the 13 Lives Theory, “states that our souls pass through 13 stages or lifetimes to complete one cycle of enlightenment,” Shine says. “Depending on where you are in your 13 lives can determine the various roles you need to learn from at this stage in your spiritual development.”

Other Ways To Use Numerology

Numerology isn’t just about past lives or lessons learned. “Have you ever looked at the clock at exactly 11:11? Noticed a similarity between birthdays or significant dates in your life? Keep seeing the same numbers show up everywhere? Numbers possess power and hold incredible meaning when it comes to uncovering the details of your lives,” Shine says.

Coincidences likes these might also be a cheeky little wink from the universe, which you can use to your advantage the next time you’re trying to make a decision. If you’re about to rent an apartment and notice that it’s unit 11 — or whichever number holds significance for you — consider it a sign that you’ve found the perfect spot. As Shine says, repeating numbers are a big “yes!” from the universe affirming and supporting the very thing you were doing, thinking, or feeling in that moment.

What Your Numerology Number Means

Now that you know your life path, check out the traits associated with each number below. You can then use this info to guide decisions and learn more about yourself, your relationships, and the direction you’d like to go.

The number one represents new beginnings, according to psychic and spiritual counselor Davida Rappaport. You are independent, goal-oriented, and innovative, Shine says, but may struggle with doubt. (You are brand new, after all.)

As a number three, you are optimistic, artistic, and charming. That said, don’t be surprised if a sense of naiveté follows you around. Your life’s focus should be on growth and expression.

As a very practical, solid number four, you are loyal and grounded, but can be dull and rigid, too, Shine says. The number four is also the number of reality — think material universe, logical reason, and structure.

Right in the middle of it all, fives are energetic, adaptable, and super social, but can be a bit unpredictable and unreliable. As a five you can either keep moving forward or fall back into old patterns, Rappaport says. It’ll be up to you to decide.

As someone on their sixth life, you are officially a caretaker, Shine says. You’re harmonious, supportive, and protective of everyone in your life, though sometimes to the point of self-sacrifice. Six is also the number of motherhood, marriage and harmony, Rappaport says, which may explain why you feel drawn to nurture.

Seven folks are spiritual and curious, Shine says. You like to analyze life. The number seven also denotes wisdom and perfection, Rappaport adds, and is considered the number of the mystic.

As an eight, you’re just about as ambitious as they come. Keep an eye out for materialistic tendencies though, Shine says. It may help to direct your focus towards other types of success.

Since nine represents competition and attainment, Rappaport says, consider yourself one of the more “awakened” numbers.

Master Number 11: The Illuminated One

You are insightful, intuitive, and aware as a master number 11. Let your strong code of ethics guide you.

As a Master Builder, you’re out there manifesting goodness into your life. It may feel like you’ve got everything figured out.

As a 33, your soul is considered to be evolved, awakened, and devoted, Shine says. As a result, you may feel selfless and detached.

This article was originally published on Sep. 6, 2016