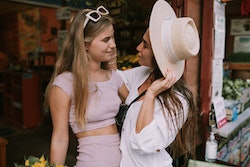 Some couples just aren’t meant to be, and that seems to be the case with Cancer and Aquarius relationships. Cancer is a highly emotional zodiac sign who’s affectionate, nurturing, and traditional. Aquarius, on the other hand, is a freedom-loving zodiac sign who’s logical, intellectual, and unconventional. While some incompatible zodiac couples can work through their differences, the crab and the water bearer may have a hard time just getting off the ground. Cancer and Aquarius’ zodiac compatibility has all the info you need to know about this challenging zodiac pair.

“Cancer and Aquarius don’t quite get each other,” astrologer Clarisse Monahan tells Bustle. “This is a difficult match, but there can be an undeniable chemistry there.”

To get down to the basics, Cancer is a cardinal water sign while Aquarius is a fixed air sign. This means that Cancer tends to embrace new beginnings and change. They’re in touch with their feelings, and the feelings of others. They’re considered to be one of the zodiac’s initiators, and this shows up a lot in their relationships. Cancer is always looking for ways to help their partner even before they ask.

As a fixed air sign, Aquarius is focused and determined. They’re constantly taking in new information and looking for ways to push the envelope. Once they have an idea in their head, there’s no stopping them. Due to their fixed nature, they tend to value commitment and stability over short-term flings. But they’re also independent, and it’ll take them a while to act as if they’re actually part of a couple.

In the zodiac wheel, Cancer and Aquarius make an inconjunct or quincunx aspect, which means they’re five signs apart. According to Monahan, this aspect means that a couple may find it hard to understand each other.

“This is an aspect of tension, in that the planets involved will be in signs totally unrelated to each other,” she says. “However, this mystery can bring an intense and overwhelming intrigue with the other. So, even though Cancer and Aquarius are about as alike as day and night, there is undeniably a link between them.”

When it comes to sexual compatibility, Cancer and Aquarius may find themselves drawn to the other. It’s a kind of attraction that may confuse them both as they’re not exactly each other’s “types.” According to Monahan, they’ll both be compelled to figure out why they can’t stop thinking about each other.

If these two were to hook up, things could go either way. As astrologer Theresa Reed tells Bustle, “Aquarius is an inventive lover and Cancer is sensuous, so there could be some fireworks in the bedroom.” Cancer prefers more slow, gentle, and romantic intimacy, but they’re willing to experiment a little in order to please their partner. But if Cancer doesn’t develop an emotional connection to Aquarius, they may lose interest and decide to move on. Aquarius isn’t affectionate, and if they’re still in the early days of a relationship, Cancer’s love of cuddling and chatting after intimacy may come off as “clingy” to the water bearer.

As you could probably guess, this is an area of the relationship that will need a lot of work. “These two hit a brick wall when it comes to forging a durable emotional connection,” Reed says. “Aquarius is aloof while Cancer is sensitive — this is like trying to mix oil and water.”

Cancer is in touch with their emotions and has no problem expressing them. They believe that being vulnerable and sharing your feelings with your partner is key to maintaining a long-term relationship.

Meanwhile, Aquarius has a reputation for being cold and unemotional. Of course, Aquarius is just as capable of sharing their feelings as anyone else, but they need to trust the person they’re opening up to— and the situation needs to make sense to them logically. For example, the emotionally-driven Cancer will cry and vent out all of their frustrations during a fight. The more cool-headed Aquarius will put aside their personal feelings in order to look at the situation for what it’s worth and then come up with a solution. Sometimes, this can make Cancer feel as if their partner doesn’t really care as much when that’s not actually the case.

On the plus side, differences give couples opportunities to learn from each other. According to Reed, Cancer can learn a lot about letting go from Aquarius while Aquarius can learn how to get in touch with themselves. If these two put in the effort to communicate, they have a chance at working things out.

Individually, Cancer and Aquarius zodiac signs are good at friendship. They’re both loyal and caring. Cancer is the zodiac’s nurturer and will drop anything for a friend in need, while Aquarius values their friendships above everyone else, even their romantic partner. However, their different approaches to staying in touch can get in the way, Inbaal Honigman, a celebrity psychic and astrologer, tells Bustle.

“A Cancerian friend is an amazing friend who’ll always be there for you no matter what,” Honigman says. “Aquarians will help, no doubt about it. But since they switch their phone off for hours at a time — so that they can be alone — they might not get your call until it's too late! Aquarians are fiercely loyal and so are Cancerians, but Aquarians prefer to focus on one friend at a time ... and Cancerians will have everyone in their living room with pizzas all day long, the more the merrier.”

That’s not to say they can’t have a friendship that lasts. They just approach their friendships differently, so they’ll need to understand how each other works in order to have a solid connection that stands the test of time.

Dating may be tough for Cancer and Aquarius because they want different things from a relationship. "Cancerians are all about the family life,” Honigman says. “They love the feeling of being together with somebody. They want to feel protected, looked after, secure, and never alone. Their sense of self doesn't come from who they are but from who they are with.”

Aquarius, on the other hand, is an independent zodiac sign who enjoys being left alone. “Like other Air signs, they need their silent time to think their thoughts and figure out their ideas,” Honigman says. “Their confidence comes from knowing that they know a lot, and knowing that they make a difference on a global scale.” For Aquarius, romantic relationships aren’t the number one priority, unlike Cancer.

According to Honigman, Cancer and Aquarius are two of the most faithful signs in the zodiac and neither sign is likely to cheat or develop an emotional affair. However, their needs are way too different.

“Cancerian's clingy personality can't easily match with the Aquarian's need for space, and in a relationship, the Aquarian will be looking for things to do alone,” she says. “Cancerians need to be in contact with those they love — eye contact, constant messages, video calling 24/7 ideally! An Aquarian will just not agree to that level of involvement.” Because of this, Cancer and Aquarius make a “poor” love match. They may have a hard time taking their relationship to the next level.

The Biggest Issues In A Cancer And Aquarius Relationship

Committing to a relationship can be one of the biggest problems for these two. “Typically these are not two signs who come together quite easily,” Monahan says.

They’ll also have to work on trying to understand how the other operates. Aquarius will need to learn how to navigate Cancer’s mood swings, while Cancer will have to learn how to not take things personally when Aquarius needs space to think. “If Aquarius can find a way to meet Cancer’s emotional needs, they have a shot at a lasting relationship,” Reed says. “This is a big challenge, but Aquarius likes to solve puzzles so they might be willing to try and crack the Cancer emo code!”

Do Cancer And Aquarius Make A Good Match?

Overall, Cancer and Aquarius are considered to be an incompatible zodiac match. Of course, no couple is doomed to fail no matter how incompatible they may be. But it does mean that both partners will have to put in more work to make the relationship last.

The good thing is both signs value commitment and are extremely loyal. ”If Aquarius can find their heart and if Cancer cools their jets,” Reed says, “this could be an exciting relationship for both signs.”

More like this
4 Zodiac Signs That Will Take Forever To Admit They Like You
By Kristine Fellizar
The 3 Zodiac Signs Most Likely To Get Married Later In Life
By Kristine Fellizar
Your Ultimate Guide To Aquarius Season
By Brittany Beringer
These 3 Signs Are The Master Chefs Of The Zodiac
By Kristine Fellizar
Get Even More From Bustle — Sign Up For The Newsletter
From hair trends to relationship advice, our daily newsletter has everything you need to sound like a person who’s on TikTok, even if you aren’t.