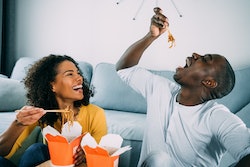 Capricorn is the zodiac’s serious and practical sea-goat who’s known for prioritizing work and their ambitions above everything else. Sweet, dreamy Pisces, on the other hand, is known for being the zodiac’s hopeless romantic. While they do value their independence, they go hard and deep in relationships to the point they become “one” with their partner. These two have different approaches to relationships and life as a whole, so they may not seem to make the best match. But this is one couple that may surprise you. Capricorn and Pisces’ zodiac compatibility has everything you need to know about this earth and water sign pair.

“A relationship between Capricorn and Pisces may sound like a disaster waiting to happen, considering their polar differences,” astrologer David Thomas tells Bustle. “However, such an early assessment may not give this relationship the justice it deserves. People may not realize it yet, but when these two signs come together, they create a wonderful pairing that’s built to last for the rest of their lives.”

According to Thomas, a Capricorn and Pisces relationship can be described as faithful, honest, and “wholly” devoted to one another. “Yes, they may have striking differences, but this does not mean they can’t build a strong relationship,” he says. “On the contrary, it’s their differences that help them appreciate one another, as well as introduce them to new perspectives in life that can help each of them grow as individuals.”

Pisces is an intuitive water sign, so they tend to gravitate toward partners with whom they feel a spiritual pull. That’s not something they might feel initially with Capricorn. These two may start off casual and possibly meet each other through mutual friends, Thomas says. And the more they see each other, the more their interest and attraction will grow.

“Pisces, being the more open sign, would be the one to show hints that they’re interested in upgrading things with Capricorn; however, the latter would initially resist it,” Thomas says. Pisces are good with change, since they’re a mutable sign, and won’t be afraid of how they may have to shift their life to invite someone else in. Capricorn, however, is a cardinal sign. Although they also are good with change, they aren’t necessarily open to it when it involves someone else. They’re used to working alone, and may initially think that someone else will distract them or slow them down.

But over time, things may change. “Capricorn would start to let their guard down, thus opening themselves to the possibility of building a romantic relationship,” Tomas says. Once they get used to each other and their quirks, they can create a partnership that’s unlike any other. Read on to learn more about a Capricorn and Pisces relationship.

Sexually, Capricorn and Pisces make a good match because sex isn’t all about physical contact and pleasure for both signs. While they can have casual fun, a foundation of trust and emotional intimacy will allow them to truly experience all sex has to offer.

“Coming together in love will help Capricorn release all the tension they’ve been holding in, and find a sense of relaxation and emotional acceptance,” Thomas says. “Pisces, on the other hand, will also find themselves developing a mature sense of self and a deeper understanding of not just their partner, but also of themselves. Sex would then be a way for Capricorn and Pisces to not just have fun and experience pleasure, but to also channel their inner selves out of love and trust.”

In bed, Capricorn and Pisces tend to have more “wholesome” encounters, so they’re sweet and loving. But Thomas says it can get intense and passionate at times, too. Overall, sex is a “way for them to embark on a journey of love and growth.”

To have a thriving friendship, Capricorn and Pisces must be on the same “mission,” explains astrologer and soul coach Valerie Mesa. For example, maybe they both work in the same industry or even met each other at work.

Initially, Capricorn will “respect Pisces for their ability to dream, their imagination, and their creativity,” says Mesa. “But Capricorn is so set in their ways when it comes to their passion that if Pisces goes a little bit off-balance, Capricorn doesn’t necessarily have the energy to pull them back on track with them,” she says. “That’s where things would get tricky.”

When it comes to emotions, Capricorn and Pisces are differ. As a Saturn-ruled earth sign, Capricorn tends to rationalize everything they’re experiencing and are often uncomfortable with public displays of emotions. They tend to hold back a lot, even when they’re already in a committed relationship. For them, being overly emotional doesn’t solve problems, which may lead to Capricorn and Pisces’ biggest communication issue.

According to Thomas, Pisces is unafraid to vocalize their emotional troubles and wouldn’t hesitate to tell anyone what they truly feel. “Such polarity can cause friction between the two sides, with Capricorn becoming exhausted and exasperated from all the emotional outbursts, and Pisces feeling unloved and misunderstood because of their partner’s approach,” he says.

“Learning how to compromise and empathize would then be the way for them to synchronize with each other despite their glaring differences. Appreciating their opposing natures would be a good place for them to start.”

The Biggest Potential Problem Areas In A Capricorn-Pisces Relationship

Capricorn and Pisces have different ways of approaching life, which can be challenging. The earthy sea-goat is practical, serious, and organized, while the watery Pisces is dreamy, goes with the flow, and is a little chaotic. Pisces might not appreciate their partner’s need for structure and may feel like it’s too restricting, while Capricorn may feel like they have to constantly “parent” their significant other.

Beyond this, “their opposing approaches towards matters of the heart can be their greatest weakness,” Thomas says. “Trying to reconcile the two sides will take a lot of mental gymnastics, but it’s not impossible to achieve.”

Once they talk it out and find a middle ground that works for both of them, the emotional bond between a Capricorn and Pisces can last for years. It will, however, require some time and patience to get there. If they’re both committed, which they tend to be, it will happen.

Are Capricorn & Pisces a Good Match?

This article was originally published on Feb. 2, 2022