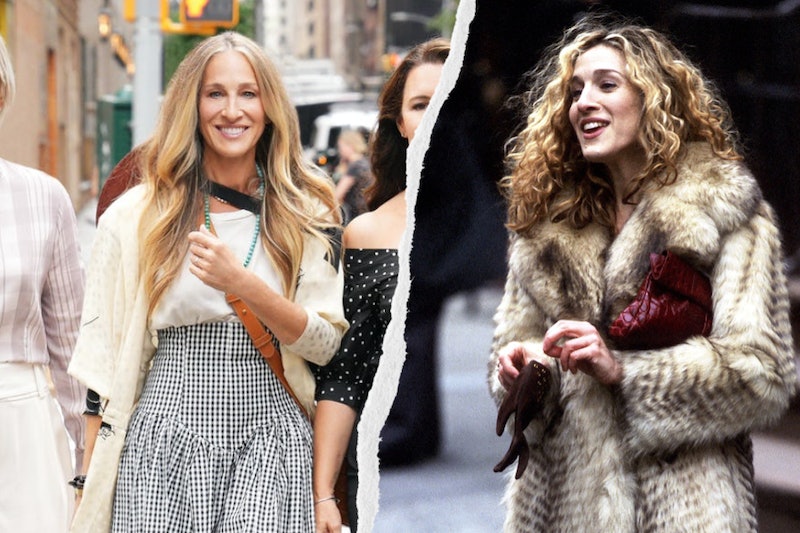 In Astrologically Speaking, astrologers make their case for your favorite fictional character's zodiac sign, based on specific scenes, quotes, and even fashion choices. Here, Dana DeFranco, co-host of the Allegedly Astrology podcast, explains why Carrie Bradshaw from Sex and the City is most definitely a Pisces. Spoilers for Sex and the City follow.

Carrie Bradshaw and (most of) the girl gang are rekindling their spark in the highly anticipated Sex and the City reboot, And Just Like That. The reboot will follow Carrie (Sarah Jessica Parker), Charlotte (Kristen Davis), and Miranda (Cynthia Nixon) as they explore a new chapter of life in their 50s. And while it’s not clear if the newspaper dress is going to make a comeback, the trailer promises that we can expect the girls to be on their typical fabulous behavior — shoe closets and all. With And Just Like That premiering on HBO Max on Dec. 9, it only feels fitting that we peek into Carrie Bradshaw’s astrology.

However, Carrie Bradshaw’s zodiac sign isn’t so cut and dry. Sources like the Sex and the City Wiki put her birthday as October 10, 1966, which would make the New York Star writer a Libra. This somewhat checks out, given her lively social life and penchant for fashion. That said, the episodes that show Carrie’s birthday — like Season 2, Episode 2, or Season 4, Episode 1 (Carrie’s 35th birthday, the one where she’s left at a table for 10 at Il Cantinori all by herself) — don’t reveal the actual date, and the episodes themselves aired over the summer. What’s more, some key details in the original SATC suggest that Carrie Bradshaw’s zodiac sign should have been dreamy Pisces — or that, at the very least, she’s a Pisces rising.

“The essence of a Pisces is hard to describe, and they’re paradoxically filled with innocence and wisdom,” Dana DeFranco, an astrologer and co-host of the Allegedly Astrology podcast, tells Bustle. “To me, Carrie Bradshaw was both an iconic and enigmatic character, embodying the very aura of a Pisces.” Considering she’s made wise and powerful revelations about self-love, but then naively pursues Big, who always seems to let her down somehow, it’s clear that she has a lot of Pisces energy. She’s a revered sex columnist whose writing is dreamlike and imaginative — which are hallmarks of a Pisces.

Read on for more definitive reasons that Carrie Bradshaw has to be a Pisces.

Carrie Has A Distinctive Shoe Obsession

Shoes are Carrie Bradshaw’s signature. Her life is chaotic and dramatic, but she always manages to find comfort in a nice pair of heels — Manolo Blahnik Hangisi pumps to be exact. And while the link between Pisces and a shoe fixation may not be seen with the naked eye, the argument that Carrie is a true-to-form Pisces does hold up for a simple reason. In astrology, each zodiac sign represents a different body part, and according to DeFranco, Pisces rules the feet. “Pisces is also associated with obsession, which explains clearly why Carrie is an admitted shopaholic.” She’s so into footwear that in Season 4, Episode 16, it’s revealed that she can’t afford to buy her apartment because she’s spent around $40,000 on shoes.

Carrie Is A Well-Known Journalist

In the show, Carrie is a revered writer in New York City who shares her sexual and romantic experiences with her readers in her column — and it doesn’t get more Pisces than that. That’s because Pisces are the writers, poets, and dreamers of the zodiac, which peeks through her work as a sex columnist.

“Pisces is the sign most sensitive to their surroundings, known for converting their experiences with others into art. Because they’re empathetic, they filter their environment through themselves and her column acts as a vehicle for processing these experiences and making them useful for herself and others,” explains DeFranco.

Not only is Carrie an esteemed writer, but she’s also got her own column, granting her high status and lively social life. "As a Pisces, Carrie would have Sagittarius on the 10th house of career, fame, and honors and public life. Carrie is a public figure, known for her column, and later, her book of essays and some long-form journalism,” explains DeFranco.

She Romanticizes Her Chaotic Love Life

Being a revered sex columnist for the New York Star, it’s Carrie’s job to entertain and inform her audience with her mishaps and escapades in romance — and she does so in a charming and dreamy way that can only be done by a Pisces. These water signs always have their heads in the clouds and can find the best ways to glamorize their ideas. Cue Carrie’s iconic “I couldn’t help but wonder,” voiceovers. Remember the time she left everything behind to move to Paris for Aleksandr Petrovsky? Count on a mutable Pisces to be willing (and slightly delusional) to take a romantic risk like that.

“In modern astrology, Pisces is ruled by Neptune — the planet of escapism, which is a major signification of the sign. This could enhance Pisces' ability to project their own expectations and ideals onto relationships or put their partners on a pedestal,” says DeFranco.

According to DeFranco, the sign that sits in Carrie’s fifth house also helps to explain why she’s definitely a Pisces. “In astrology, the 5th house rules sex, dating, and romance in relationships, and Cancer is the sign on Pisces’ 5th house,” explains DeFranco. “Cancer is ruled by the moon, which completes a full cycle through the zodiac roughly every 28 days. So it makes sense that the house ruled by the moon will experience the most overturn or sudden change in life,” she adds.

Carrie Bradshaw is a hopeless romantic who’s always exploring the complicated depths of sexuality, friendship, and love. Her adventures and mishaps are something out of a long-winded fantasy as she lives a glamorous lifestyle. Some may argue for her love for romance and beauty leans closer into Libra territory, but between her unique storytelling and compulsive romanticization of her life, Carrie possesses the kind of imagination that can only be had by a Pisces.