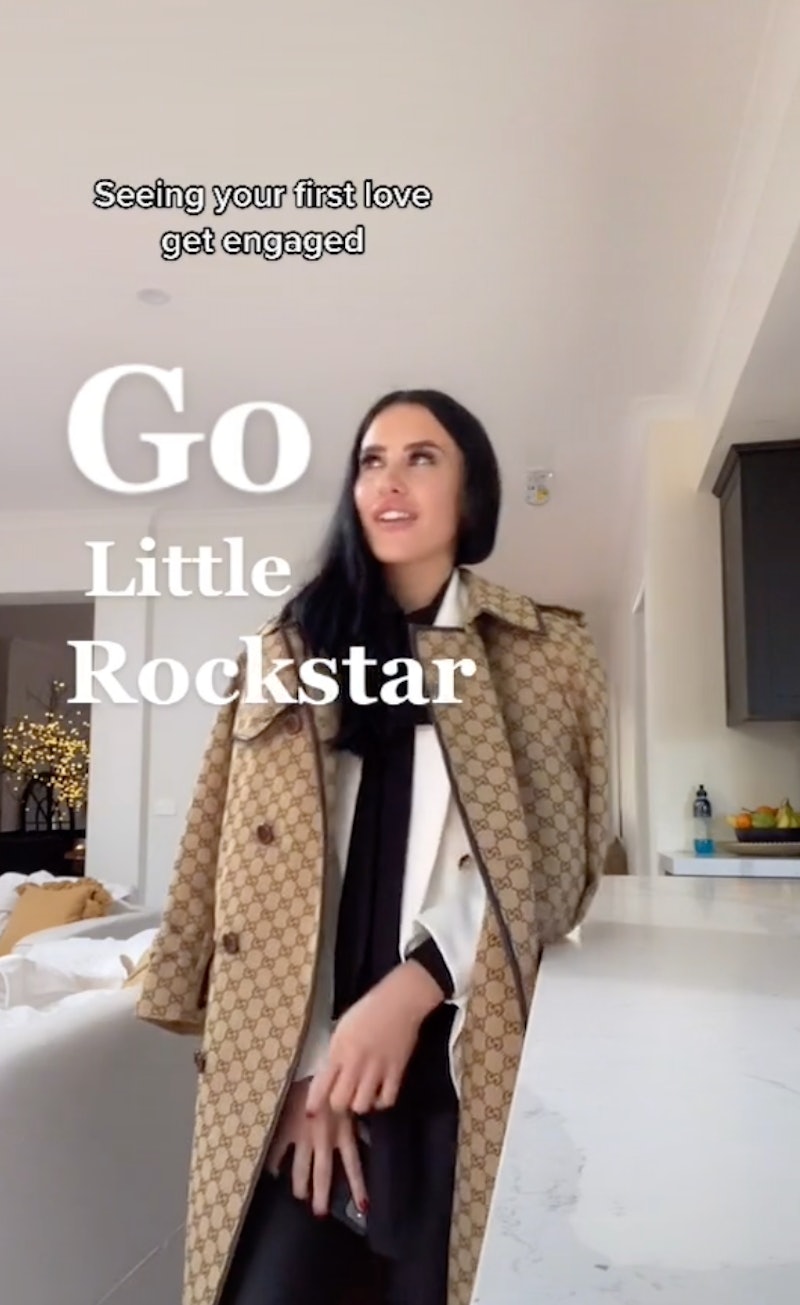 In a world of “Pass the Phone” roasts and Milk Crate Challenges, it’s always refreshing to see a wholesome TikTok trend emerge. And few have captured our hearts quite like the “Go Little Rockstar” trend. The TikTok sound, consisting of a few mellow guitar strums, drum thumps, and some words of encouragement, has been used by TikTokers to accompany videos about everything from watching their pet grow up to high-fiving their inner child. But, like many viral TikTok trends, the sound has come a long way since its origin: It’s a snippet from the 2016 track “Pope Is a Rockstar” by Orlando, Florida, indie pop duo SALES.

The sound, which is being used on over 1.4 million videos, started to go viral in early December, says SALES member Lauren Morgan. “I was on our stats because we just released a single, and I noticed ‘Pope [Is a Rockstar]’ was getting a lot of plays, which I thought was weird.” It didn’t take long for Morgan to start receiving texts from friends alerting them that the song had become a viral TikTok trend.

At first, many videos used the sound to pay tribute to deceased loved ones, but from there, millions of different riffs appeared of sweet learning moments, thank-yous to loving parents, and even oddly sweet videos like Dobby receiving a sock for Christmas.

It’s unclear how or why “Pope Is a Rockstar” received a second wind on the app nearly five years after its release, but it wouldn’t be the first time users have taken pieces of pre-TikTok pop culture and run with it. See: The revival of Reba McIntyre’s song “I’m a Survivor” from her 2001-2007 sitcom, and the seemingly eternal TikTok relevance of the 2004-2013 Nickelodeon show The Backyardigans. A few of SALES’s own songs had even trended on TikTok already, including “Renee” from 2013 (the “you got it” audio) and “Chinese New Year” from 2014 (the “see you at the movies” track).

While the “Go Little Rockstar” trend might have taken a positive turn, it still was missing one thing: The correct lyrics. It seems that whoever began the trend misheard Morgan singing “Pope is a rockstar,” interpreting it as “go little rockstar” instead. There’s even a strain of “Go Little Rockstar” videos where users flag the misinterpretation of the song’s original line. “The trend is sweet idc if everyone is getting the lyrics wrong,” wrote user @naomii.org under one video about the confusion.

While the messages used in the trend might have been a mix-up of the song’s original lyrics, Morgan notes that the song was intended to be open for interpretation. “The lyric, ‘Go little rockstar,’ is so cool,” they laugh. “I'm kind of upset I didn't think of that.” Morgan explains that the original line “Pope is a rockstar” came to them when they were working as a cashier at a grocery store.

“Some lady picked up Time Magazine and the Pope was on it, and she said, ‘The Pope is a rock star,’” Morgan laughs. “I took out some receipt paper and I jotted it down ‘cause I was like, ‘That is so layered and weird.’” Morgan took the line to the studio, where it became the centerpiece of an ad-libbed stream-of-consciousness song that they insist has no explicit meaning. “People can sing whatever they want. It's totally cool with us.”

More like this
Ashamed Of Your Screen Time Stats? Here's How To Change That
By Alexis Morillo
How To Turn Off TikTok Profile Views So You Can Stalk Other Accounts In Secret
By Alexis Morillo
An Expert Weighs In On The Viral Raw Carrot Salad Trend
By Alexis Morillo
Learning To Love, Not Judge, The Lunchbox Wives Of TikTok
By Esther Zuckerman
Get Even More From Bustle — Sign Up For The Newsletter
From hair trends to relationship advice, our daily newsletter has everything you need to sound like a person who’s on TikTok, even if you aren’t.