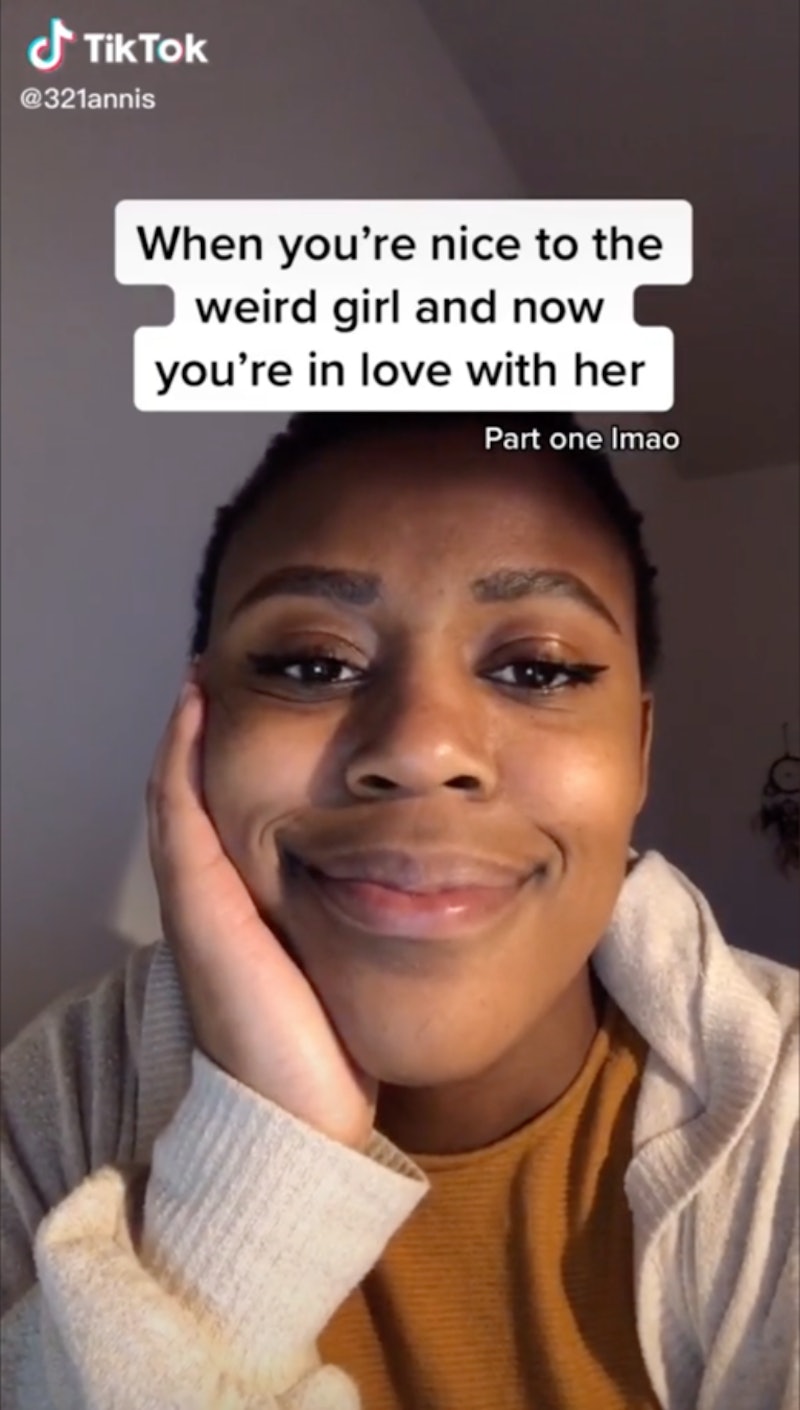 According to every high school drama ever written, "weird kids" are meant to be kept at arm's length. While they make great secondary characters and quirky best friends, you aren't supposed to flirt with them — much less fall in love.

Unlike the "cool" kids, the weirdos remain elusive, only popping into the story to do a funny dance or to make a clever observation. They hardly ever "get the guy." But that's precisely why the weird kid trend on TikTok is so adorable. It takes a tired trope and uses it to remind us that it's always 100% worth it to give the unexpected character a chance.

These "weird kid" TikTok videos are rife with footage of people galloping around their living room on all fours, dancing atop beds, and otherwise putting themselves in "embarrassing" or weird situations — all while their partner smirks happily at the camera and admits they've been dating for years. To really drive the point home, "How To Save A Life" by The Fray plays in the background.

These folks may not be in your inner circle when it comes to dating, but the moral of the story is they're actually super lovable and — surprise surprise! — often really great partners.

That said, judging by the way the creators often stare, Office-style, into the camera — and by the fact they're making the video in the first place — you can only assume the couple probably would have talked under any circumstances. They ended up an unlikely but totally happy duo.

Sometimes the person making the video even admits, in a joking way, that they didn't expect to fall in love.

For example, take this one video where a woman says she was just nice to the weird girl at college because she "felt bad," but now they're dating — and even live together.

And who could blame them? It's clear the subjects of these videos are charming AF and that they add a touch of spice to their partner's lives by fully being themselves, even if "being themselves" lands them firmly in the quirky territory. (Cut to video of one love interest doing an interpretive dance in a kitchen while wearing a neon hat, then later dancing on a bed.)

While most of the videos are about falling in love with the weird kid, the trend also neatly applies to other scenarios that involve talking to people you might not usually talk to. It even works in situations where it might be "taboo" to fall in love, like in this video about a woman flirting with her coworker.

If these TikToks teach us anything, it's that you can't predict who you'll end up loving. Sometimes, you just have to be nice to the person who's eating lunch by themselves or who's forsaking all social norms to play on a playground. If you give them a chance, even if they aren't normally your type, some pretty magical things can happen.

More like this
30 Clever Ways To Slide Into Your Crush's DMs
By Griffin Wynne, Carolyn Steber and Lexi Inks
Breeding Kinks Have Been On The Rise Since Roe V. Wade Got Overturned
By Lexi Inks
Are Quality Time & Gift-Receiving Love Languages Compatible?
By Lexi Inks
10 Creative Sexting Ideas That Don't Involve Nudes
By Lexi Inks
Get Even More From Bustle — Sign Up For The Newsletter