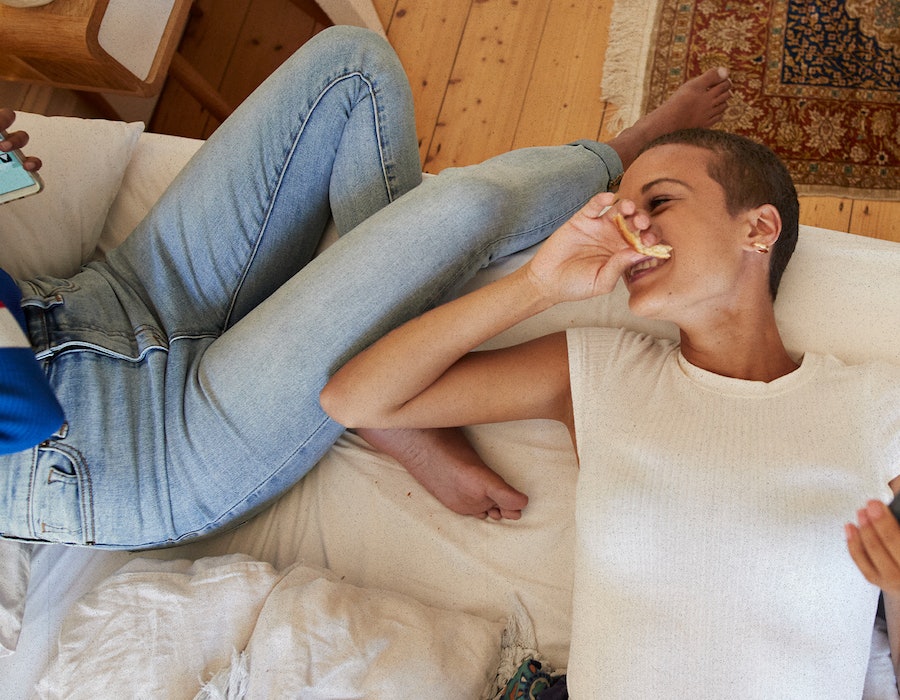 Klaus Vedfelt/Getty Images
How To Move To The Suburbs

Does this sound familiar? You appreciate a ceaseless chorus of car horns while walking to a bottomless brunch, but the idea of a bedroom where you don’t have to push your mattress against the wall just hits different. You’re not alone. Even back in 2019, the number of millennials and Gen Zers trading in roommates and flex bedrooms for a less-expensive, spacious life in the suburbs was up 48% year-on-year. That number has accelerated during the pandemic, which means that if you’re considering leaving the city, there might be a lot more young people in your neighborhood than you think.

This is valuable, because the pals who would meet you for impromptu taco Tuesdays when your boss is being mean aren’t close by anymore, and sadly, science shows that proximity is the most likely predictor of friendship. “Distance makes it harder to keep up with [your friends’] lives, and you spend less time together,” Sanam Hafeez, Psy.D., an NYC-based neuropsychologist and director of Comprehend the Mind, tells Bustle. If you do move, these friendships will thus require more upkeep than either of you are used to.

“We tend to take for granted the ease of getting together with friends in a city,” says Rachel Wien, Psy.D., an NYC-based clinical psychologist and founder of Milestone CBT. “Once more effort needs to be made, some friendships tend to die off.”

Effort is also in high demand when it comes to making new friends. “It’s harder to make close friends as an adult because we are often not taught the necessary skills to make friends. As we grow up, we are put in environments (schools, camps, clubs, activities) that make it very easy to find people you are similar to, and you become close friends with them thanks to proximity and spending so much time together,” says Wien. “These people often know you from when you’re young and know about your history. As adults, we may find it difficult to put ourselves out there and don’t want to have to explain ourselves to someone new.”

Unless you’re (1) a teenager, (2) a Sagittarius, or (3) not already navigating a pretty significant life change, solving these problems is tough. But we also know how gravely loneliness can affect humans mentally, so finding a solution is non-negotiable. And luckily, with a bit of active effort, you can have your laundry in-unit and a circle of new and old friends, too.

How To Find New Friends

Not to make your status an emo Green Day lyric like you did in 2008, but to peruse interest groups or source group activities near you. “By doing this, you are getting out of your daily routine, able to meet new people, all while engaging in an activity that makes you happy,” says Hafeez. “Many people at these types of group classes are also putting themselves out there by simply attending.” Facebook groups range in theme from casual runners to Starbucks’ infamous Leaf Rakers Society, with an October 2020 study finding that 38% of people active in Facebook’s online communities did so to meet people in real life.

If Facebook isn’t your thing, there are other apps that offer similar benefits. The platform Meetup exists for the sole purpose of fostering connections between people. You’ll find events like “singles mixers” or “LGBTQIA speed friending,” which introduce you to multiple people at once and allow you the chance to “bond with others about your commonalities,” says Hafeez. Meet My Dog also exists for those of us who take better to new dogs than new people. (Although, it’s unclear if you must actually own a dog to meet the other dogs.)

Tip: If you were on the fence about getting a dog while you lived in the city, now might be the time to take the plunge. People walking with dogs get more smiles from strangers, while a 2019 study found that nearly half of dog owners have made friends while taking their pup for a stroll.

Do The Inviting Yourself — And Be Consistent

As an extreme introvert with crippling social anxiety, I would rather rip off my own nails than do this — but waiting around for someone else to do the inviting is a recipe for disappointment, especially if you’re befriending people who already have established, busy lives. Taking it upon yourself to make plans with new acquaintances benefits you twofold: It makes the other person feel special, and it lets you have some control over what the plans are.

Once you’ve successfully made and followed through with plans to hang out with someone new in the suburbs, incredible. Do it again. “The best way to have a friendship blossom is to reach out and communicate regularly with that person. If there is a common interest you first connected on, make sure you follow up and suggest engaging in that thing together,” says Wien. “If you initiate contact and make plans, the other person will likely follow suit, leading to a stable friendship.”

Don’t Be A Hermit In Your Building

The days of living somewhere for five years and not knowing your next-door neighbor’s name are over. If you live in an apartment building or housing complex with multiple units, “make eye contact and smile” when you see your neighbors, says Hafeez. “Non-verbal interactions can say a lot about how someone feels, and if you make eye contact and smile, you build trust, demonstrate true connectedness, and show the person you care.”

If you live somewhere that hosts happy hours or rooftop gatherings, make it a point to attend those events soon after you move in. Because proximity tends to play a major role in developing friendships, getting to know the people who live near you, according to Hafeez, sets you up for a potentially very easy bond.

Tip: If you’re in a single-family unit on a suburban street, make the most of moving season, which typically runs April to October. Make yourself available outside your property in the nicer weather and hopefully some small talk could lead to real friendships down the line.

How To Keep Your Old Friends

Keep Each Other Updated

This is a self-drag, but you’re probably on your phone all the time anyway, so text your city friends. Make a concerted effort to call them if you have a free moment, even if it’s just to say hi. Plan a regular FaceTime date so you both have a small moment to look forward to. “You can also plan to do something together even though you are apart, such as watching the same TV show and then having weekly discussions about it,” says Hafeez. “Finding something you can do in different places will give you a reason to connect and something to talk about.”

“One thing we learned during COVID-19 is that there is no substitute for in-person get-togethers with others,” says Wien. “Texting, calling, and FaceTiming are good substitutes, but it is not easy to maintain relationships just through the phone.” Making time for the occasional IRL plans also allows you to make new memories with your city friends, so you’re not only reminiscing about the past or playing catchup on each other’s lives.

Assuming you haven’t moved too far away, set aside a day to hang out with your city friends in person once a month or at a cadence that makes sense for both of you. Trade off locations weekly or plan to meet in the middle, and if you can, plan an activity for the day, like taking a class or having lunch at your favorite restaurant. To keep it up, try to settle on a tentative date for your next plans while you’re hanging out so neither of you forgets after the fact.

Tip: Don’t be afraid of some friendship turnover. One study found that if you looked at your friendship group every seven years, only 48% of the people stay the same. Some attrition is expected and ensures you don’t stay in toxic friendships just for the sake of it.

Introduce Your Old Friends To Your New Friends

Consider inviting a new friend from the suburbs to spend a day in the city with you. While there, you can introduce them to your city friends. “The more your friends know about your old or new life, the more they will be engaged and feel close to you,” says Wien. Assuming they hit it off, you’ll be able to plan more outings with both sets of friends at the same time, making nurturing both sets of friendships a little bit easier.

More like this
24 History-Making Black Women You Probably Didn't Learn About In School
By Ayana Lage and JR Thorpe
25 Inspiring Quotes From Black Women To Celebrate Black History Month
By Kyli Rodriguez-Cayro and JR Thorpe
Courteney Cox & Laura Dern Proved Their BFF Status With Matching Tattoos
By El Hunt
How To Hide Cords Under A Desk
By Jenny White
Get Even More From Bustle — Sign Up For The Newsletter
From hair trends to relationship advice, our daily newsletter has everything you need to sound like a person who’s on TikTok, even if you aren’t.