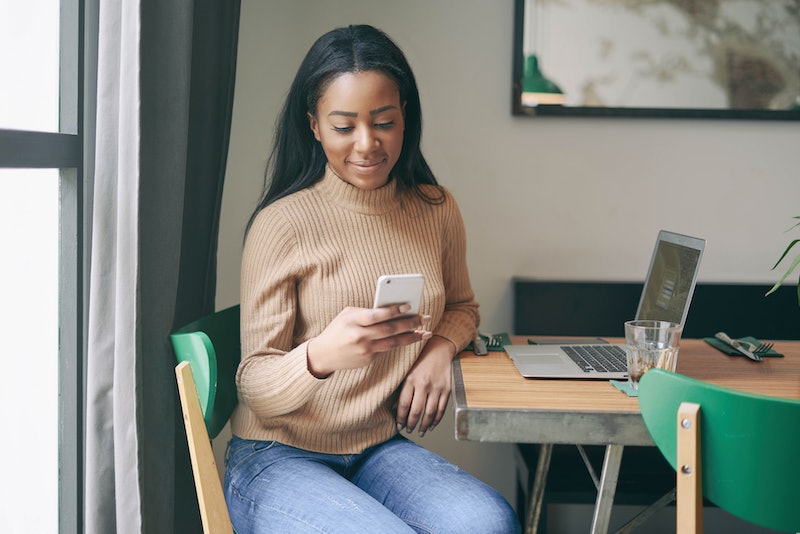 It’s estimated that half of people get their news from social media, and in the age of fake news and misinformation, that’s a worrying statistic. Whether it’s a family member scaremongering about a health condition or your mate telling you that they’ve heard some intel on a celebrity death, it can feel like there’s not much you can do to shut down unsubstantiated rumours in your WhatsApp group chat.

It’s such a serious issue that in late March, WhatsApp created a coronavirus chatbot in partnership with the UK government to provide reliable information and advice to users of the App. The messaging service also introduced new signage (a double arrow) to flag messages it believes may contain false or misleading information, the platform also limits the number of times a "frequently forwarded message" – a message sent on more than five times – can be sent on.

Facebook, Inc., who own WhatsApp, added similar features to Facebook and Instagram. If you’ve come across misinformation recently on Facebook, you’d have noticed a pop-up at the top of your feed that links to information on the World Health Organisation (WHO) website. Warning labels have also been added to misleading posts which informs users that a post contains false information, and that it’s been “checked by independent fact-checkers.”

WhatsApp also announced on March 18 that it will donate $1 million to the International Fact-Checking Network (IFCN) in a bid to stop the spread of misinformation around the growing global COVID-19 outbreak. According to SiliconRepbulic, the programme has been launched in partnership with the World Health Organisation, Unicef and The UN Development Programme.

Despite these moves, coronavirus misinformation has still been widespread. So much so that the government's Digital, Culture, Media and Sport Committee is arguing for the introduction of greater powers to stop misleading content circulating. In a statement given to the BBC, the chairman of the group Julian Knight said: "We still haven't seen correct legislative architecture put in place, and we are still relying on social media companies' consciences. This just is not good enough. Our legislation is not in any way fit for purpose, and we're still waiting. What I've seen so far has just been quite a lot of delay."

In 2019 the government had unveiled plans for a new Online Harms Bill which was intended to compel social media companies to tackle harmful content on their platforms. However, there are rumours that its introduction could be delayed until 2024. In the meantime, if you're concerned about misinformation online, there are things you can do to help minimise the spread.

Not all forwarding is bad, WhatsApp stresses: "We know many users forward helpful information, as well as funny videos, memes, and reflections or prayers they find meaningful. In recent weeks, people have also used WhatsApp to organise public moments of support for frontline health workers." But it’s important to recognise if something has been forwarded on.

That is where the "Forwarded" label comes into play. “That will help you determine if your friend or relative wrote the message or if it originally came from someone else. When a message is forwarded from one user to another more than five times, it's indicated with a double arrow icon.”

If someone you know send something that looks inauthentic, ask them to stop spreading information like this without checking it first.

Find out where it came from

Rumours on social media can be hard to trace, with every piece of gossip seemingly coming from a friend of someone close to the reported action. More often than not, the information you’re being given is multiple people removed from you, making the source of the story impossible to locate (if they exist at all).

If someone sends you information based on this pattern, ask the person to send it to you who the original source of the info is. If they don’t know, ask them to ask the person who sent it to them. This can help you get closer to the source of the info, but should they feel too embarrassed to ask, will highlight to your sender the dangers of sending info with no proof.

Check against a trusted source

When we imagine internet rumours, it tends to be in the form of a poorly edited picture full of spelling mistakes that you can’t believe anyone would fall for in the first place. But this isn’t always the case and often a piece of ‘news’ or rumour will come through on WhatsApp that seems totally plausible.

Most recently, a conspiracy theory made the rounds that 5G networks were linked to the spread of COVID-19, leading to four 5G masts in North England to be targeted with arson. Despite experts dispelling the theory, misinformation still spread through social media, even by some celebrities.

Before you pass on or even believe news you’ve been told by a friend over social media, seek to verify it. Head to a trusted UK news organisation such as the BBC or any large broadcaster and see if you can verify the story. Make sure any reports you can find are recent — I’m sure we’ve all seen a story from over a year ago go viral with people thinking it’s current — and is talking about the UK, not another country.

If a story, picture or video has appeared on one of these trusted outlets, it’s much more likely to be accurate. Of course, things can go wrong, but it is the jobs of these publications to verify the information they receive before sharing it and they can get in trouble for sharing fake or doctored news, meaning they’ll have put the time into fact checking.

It is easy to equate thousands of likes and shares with a ‘successful’ article or post but it is worth noting that huge engagement numbers do not prove authenticity — just look to the infamous Fyre Festival scandal as the perfect example. With the freedom to post provided by platforms such as Facebook, fake news can perform just as well as legitimate sources — especially posts and pictures that trigger an emotional response. “Misinformation goes viral because it plays on our emotions, so that's a sign that it might not be true,” says BBC News. Frustratingly, the more interaction these posts get, the more likely they will be shared and, with the way social media algorithms work, will most likely be prioritised in news feeds. A BBC News fact-checker has warned against interacting with a suspected fake post, even to dislike it, as it could get bumped up the priority list. “Report it instead,” he urges.

Read beyond the headline

At one point in our lives, we’ve all been guilty of sharing an article based on its headline and not reading the content. You see the headline, have a reaction and either screenshot or send a link to your friends or family, only for them to point out that a quote has been taken out of context and the story doesn’t actually support the headline.

Obviously this is embarrassing, but it's also dangerous. We’re all so rushed for time and want to quickly respond to stories, but this only helps the spread of misinformation. Before you send on an article, give it a read and think: does the headline support the content? Is my friend going to read the whole article? Am I misleading someone if they don’t?