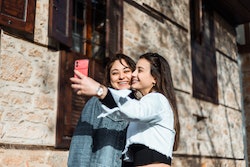 Since the dawn of Instagram’s Close Friends, many users have let their green circle of trust in on a never-before-seen side of their social media presence. (AKA, a more candid persona that was previously saved for one’s private finsta.) From crying selfie stories to scraps from the photo dump’s cutting room floor, you may have been letting your freak flag fly with your selected group of trusted Close Friends. Soon, you could be able to expand this circle of trust to the bird app.

Twitter announced on May 3 that the company is testing out a new feature called Twitter Circle. Users will be able to to add up to 150 people to their Twitter Circle — an audience of users whom Tweeters can select to view certain posts. Unlike Twitter’s “Fleets” venture, Circle won’t function as a story feature, like Instagram Close Friends does. Instead, Twitter Circle will apply strictly to tweets.

While you may have opted for a private Twitter, or to keep your public tweets more reserved, Twitter Circle can allow you to present multiple personas on your Twitter without having to worry about who’s going to read every one of your online missives. Perhaps you love joining in on the trending meme format of the day, but aren’t ready for your boss to see your comedic chops just yet. Or you just don’t want your old acquaintances from high school to see your more candid Twitter diary entries. There’s plenty of reasons to want to limit your audience on a few select tweets.

Though not everyone has access to the test, some users have reported seeing the green “Twitter Circle” option pop up — similar to the green Close Friends star. Here’s everything you need to know about how to use Twitter Circle.

If you are a part of Twitter Circle’s testing group, you’ll be notified upon opening the app and drafting a tweet. Twitter Safety posted a video sneak peek at the feature, which shows that users will be able to edit their Twitter Circle by following this pop-up.

Users will be prompted with a list of users they follow to add or remove them from their Twitter circle by tapping next to their username. You can select up to 150 users to be in your Twitter Circle, and you can edit this list at any time by heading back to “Edit your Twitter Circle” and adding or removing users as desired.

Once you’re ready to tweet to your Circle, just draft a tweet as you normally would. It appears from the Twitter tutorial that you will be able to select “Twitter Circle” to the right of your name in the drafting window. (The button is even shown in green, like Instagram Close Friends.) Then, just tap the “Tweet” button and only your Circle will be able to view or reply to your tweet.

If you don’t see the option to use Twitter Circle, it is likely because you are not part of the selected testing group. Sit tight and tweet as wisely — or as unhinged — as you please to your unfiltered list of followers.