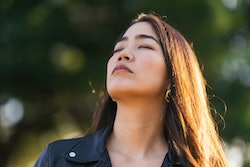 If you dabble in the world of mystical arts, enjoy following trippy alt TikTok trends, or maybe just power-watched the entire Behind Her Eyes series on Netflix, then you've probably been introduced to the practice of astral projection. The idea of transcending your physical body in order to explore other dimensions of reality sounds pretty incredible, but is astral projection real? Like the practice itself, the answer is a little complicated.

Astral projection is an intentional out-of-body experience during which the "astral traveler" goes into a dreamlike but still-conscious state and visits other realms using the power of their mind. This altered state of consciousness can be achieved by using practices like meditation and self-hypnosis, and is thought to allow people to travel through time, space, and other dimensions. This concept hinges on the idea that humans have "astral bodies" (sometimes referred to as etheric, energetic, or subtle bodies, or souls) and that there’s an "astral realm" that transcends the tangible world around us. The idea of an astral realm is found in many different cultures and religions (including in Hinduism and various occult traditions such as Sufism and Kabbalah). When you astral project, it’s believed that your soul or etheric body leaves your physical body in order to travel through this other-worldly plane.

Countless people have shared accounts of their astral travels, and there are even techniques for astral projection that you can try at home. But is there any science behind astral projection? Well, the answer is complicated.

Astral projection involves esoteric and intangible matters such as the astral plane and the etheric body (neither of which can be proven with science at this point), so the concept is admittedly much more spiritual than scientific. While the existence of an actual astral plane may still be up for scientific debate, out-of-body experiences are acknowledged as valid in the scientific community, as is the human ability to experience altered states of consciousness.

“There isn’t much scientific research going into astral projection, [but things like] deep meditations, hypnosis, and shamanic journeying are all forms of astral projection,” energy healer and psychic medium Manu Del Prete tells Bustle. “What science has proven so far is that when we have these lucid dreams or vivid meditation experiences, brain scans show a balance of delta and theta brain waves.” Delta and theta waves are the frequencies produced by our brains when we’re sleeping, which is probably why astral projection is reportedly similar to lucid dreaming.

While science may not be putting its stamp of approval on the concept of astral travel just yet, there has been some research done on the topic. “Studies regarding how the brain reacts during astral projection have found activation within the parts of the brain that govern movement and imagery projection, even while the body remains still,” ascension guide and channeler Laura Brown tells Bustle. For example, in a study published in the Frontiers of Human Neuroscience, researchers observed a subject's brain while they claimed to be astral projecting. The researchers successfully identified some unique parts of the brain that were active during this alleged journey through the astral plane — which shows that astral projection is certainly a perceived experience in the brain of an astral traveler.

And there’s some anecdotal evidence that points to the validity of astral projection, too. “All science aside, some of the most substantial evidence is in the U.S. government's admission that they employed a technique called remote viewing (a fancy term for astral projection) during wartime,” Brown says. “Using remote viewers, there was a significant advantage in anticipating the moves, location, and devices being created by the opposition.”

Astral Projection Can Be A Visceral Experience

Studies may not be able to prove that a subject’s consciousness actually travels through the astral realm, but research shows that our brains can certainly perceive the experience as being real. And until we can make abstract concepts such as consciousness scientifically tangible, we’ll have to leave some things up to faith. “An analogy that I often bring up to my students is if a computer is your body, then the software is your mind, and the electricity is consciousness,” Del Prete says. “Without consciousness, we won’t have an experience in this body.”

So regardless of whether or not you believe in the existence of an astral plane, astral projection will likely feel very real to anyone experiencing it. "When astral projecting, you actually take in information through all of your typical senses," professional psychic Renée Watt tells Bustle. You may not be having an experience in the physical realm during an astral projection session, but that doesn't mean you won't perceive the experience through the usual sensations of your physical body.

"Some people can receive psychic information through touch or visions, while others hear messages or can smell things that aren’t actually there," Watt says. "You may experience tingling on your skin but see nothing." Through the process of astral projection, we can have experiences that feel viscerally real, even though they're taking place on an astral or psychic level. If you really want to know whether astral projection is a real phenomenon or not, get to practicing and try to experience astral travel for yourself.

While astral projection may not be a scientific concept at this point, that doesn't mean it's not a real experience, or that it can't be used as a helpful tool for your spiritual growth.