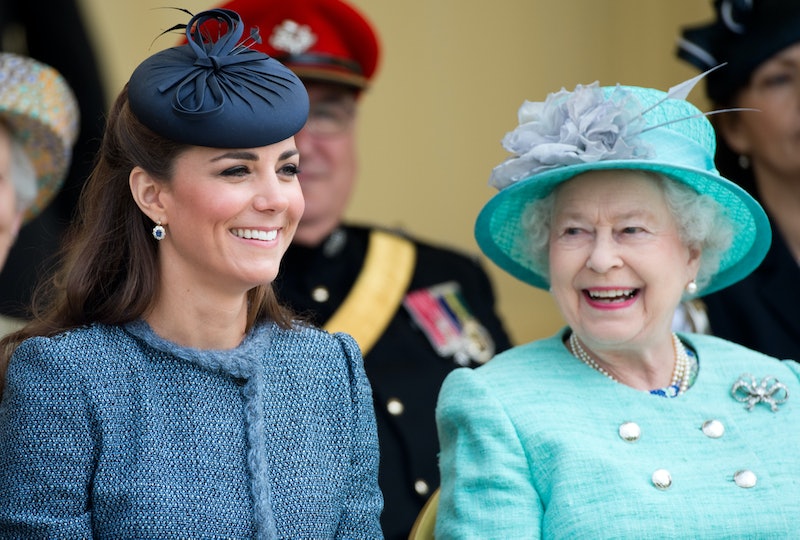 Christmas shopping for your in-laws can be tough but what do you buy your partner’s grandmother when she literally has it all? It’d seem that the magnitude of spending the holidays at Sandringham with the royal family for the first time wasn’t lost on Kate Middleton but her super-personal Christmas gift to the Queen meant she was welcomed into the family with open arms.

After they got married in 2011, Kate Middleton and Prince William spent their first Christmas as a wedded pair with the royal family at Sandringham. When faced with getting the Queen a holiday gift, Kate Middleton revealed she was a bit stuck. "I can remember being at Sandringham, for the first time, at Christmas and I was worried what to give the Queen as her Christmas present," she said in an ITV documentary that celebrated the Queen's 90th birthday.

In an ingenious move, Middleton passed on a gift from her own grandmother. "I was thinking, 'Gosh, what should I give her?'” she said. “I thought back to what would I give my own grandparents and I thought, 'I'll make her something', which could have gone horribly wrong, but I decided to make my granny's recipe of chutney." Whatever the flavour, the Queen must have appreciated Middleton’s thoughtful gift as it had pride of place on the royal Christmas dinner table the following day.

While making the Queen a gift could have been seen as a risky move, a royal expert told OK! Magazine that Middleton really understood the assignment during her first Christmas at Sandringham. “A homemade chutney gift was absolutely spot on – down to earth, practical and frugal – everything Her Majesty loves,” said royal expert Duncan Larcombe. “[I]t also showed that Kate could relate to the Queen as a normal grandmother and not just the head of state. And it helped forge a bond built on mutual respect and admiration.”

It sounds like Middleton thrived during her first Christmas with the Queen. However, it’s been reported that she may have had cause for concern. Fans of The Crown will recall the episode in the fourth season where Princess Diana (played by Emma Corrin) meets the royal family for the first time at Balmoral Castle in Scotland. She spends days trying to impress them by taking part in every outdoor activity imaginable and shining in every conversation.

And apparently, this protocol isn’t too far from the truth. “They call it the queen’s Balmoral Test but I would call it more of a royal initiation," BAZAAR.com's Royal Editor at Large Omid Scobie said. “If you’ve scored an invite, prepare to brush up on your royal protocol, have a wealth of talking points at the ready, an outfit for every occasion (from hunting to black tie) and, most importantly, be on your best behaviour at all times. Social etiquette is a must! If you don’t like the food, eat it anyway. If you don’t like trampling through the Highlands in the wind and rain, tough!”

However, it isn’t all work. Scobie outlined that the Queen is at her most relaxed at Balmoral and there’s lots of family BBQs and quiet times too.

Middleton’s Christmas initiation didn’t involve a long walk through the wilds of Scotland. A sweet festive chutney was enough to warm her to the Queen.