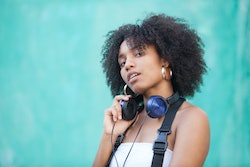 When you think through the zodiac signs of all the people you know, are there a few signs that show up pretty sparsely on your list? You might be able to chalk that up to the fact that we're all naturally drawn toward certain astrological personality types, since the compatibility between zodiac signs varies. But you may also be able to attribute this disparity to the fact that there are actually fewer people born under certain zodiac signs than others. And when it comes to the least common zodiac signs, you might be surprised by how things add up.

According to data aggregated by FiveThirtyEight, which studied the number of births in the United States between 1994 to 2014, it appears that birthdays throughout all 365 days of the year are not equally distributed. In fact, the least common birthdate (Dec. 25) only boasts about half the number of births that the most common birthdate does (Sept. 9). So statistically speaking, you probably won't run into too many Christmas-week Capricorns, but are much more likely to encounter an early-September Virgo.

Fun fact: Seven of the 10 least common birthdays are either holidays (Christmas Eve, Christmas Day, New Years Day, Independence Day, and Halloween) or holiday-adjacent dates (Dec. 26 and Jan. 2). And the remaining three dates all fall within the last week of November, which is usually the week of Thanksgiving. Is this a ploy to discourage the practice of combining a holiday gift with a birthday gift? While we can't know for sure, the likely answer is that it's actually a result of the rise in planned births via scheduled inductions, which allow parents to avoid giving their babies the gift of a holiday-birthday combo.

But let's get to the good stuff. Here's the scoop on the least common zodiac signs in astrology.

The two least common birthdates (Dec. 25 and Jan. 1) are both national holidays. But they have something else in common, which is that they both fall during Capricorn season. Studies show that more babies are conceived during the winter months than any other time of the year, so it appears that more people are making babies during Capricorn season versus actually giving birth to them. Since Capricorn season heralds in the winter (and also boasts the bulk of the winter holidays, which people may avoid if they're scheduling their birth), it's no surprise that they ranked lowest on the list of most common zodiac signs.

Capricorns may be less common than other signs, but that's part of what makes them such gems. These hardworking and pragmatic earth signs are the zodiac's old souls. They tend to stick to traditional ways of doing things and have a deep sense of respect toward their responsibilities — in fact, we could probably use a lot more of their grounded and disciplined energy. Capricorns may come off as serious, but they're also deeply spiritual and sensual once they open up. Next time you encounter a Capricorn, be sure to thank them for their rare breed of honesty, diligence, and hard work.

While the data showing Capricorn as the least common zodiac sign is pretty strong, the numbers for the runners-up are within relatively close margins. Given the close numbers plus the fact that the sun switches zodiac signs at a different time (and sometimes a different date) each year, it's impossible to know how many cusp zodiac sign babies were born within one sign's territory or the other (and makes these babies’ horoscopes a little more complex). So until birth data starts factoring in the astrological position of the sun, we'll have to settle on this educated guess — which puts Scorpio, Aries, and Aquarius at the top of the least-common list, after Capricorn.

The runners-up for least common zodiac signs are a motley crew of strong personality types. We've got emotionally-intense water sign Scorpio (born between Oct. 23 - Nov. 21), innovative air sign Aquarius (born between Jan. 20 - Feb. 18), and feisty fire sign Aries (born between March 21 - April 19). While these zodiac signs don't have much in common besides their relatively sparse number of birthdays, they all stand out as powerful figures in the zodiac.

Scorpios are powerful and deep feelers who love to explore all the beneath-the-surface secrets of life — so it's no wonder people born under this relatively rare sign seem like such mystical and mysterious beings when we meet them. Forward-thinking Aquarius thrives on being unique and standing out from the crowd, so being labeled as one of the least common zodiac signs would be a badge they'd likely wear with rebellious honor. Lastly, headstrong Aries is the brave leader of the zodiac, and it's clear that their trailblazing fearlessness is an even rarer quality than we thought.

More like this
These 4 Zodiac Signs Are In The Clear During September’s New Moon
By Brittany Beringer
These 4 Signs Are The Sarcastic Jokesters Of The Zodiac
By Brittany Beringer
The 3 Most Family-Oriented Zodiac Signs, According To An Astrologer
By Nina Kahn
Here’s Why Sagittarians Should Pursue A Career In Academia
By Nina Kahn
Get Even More From Bustle — Sign Up For The Newsletter