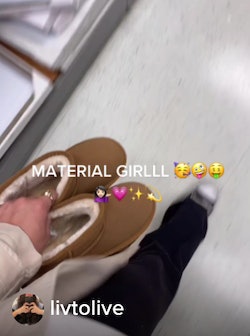 MATERIAL GIRL. Your first associations with this glamorous phrase might be Madonna’s 1984 hit of the same name. However, if you’re active on TikTok, or virtually anywhere on the internet at this point, you probably just read that first sentence in the unforgettably distorted voice of Florida rapper Saucy Santana, with the background bass fully boosted — more material gworl than material girl. While Saucy Santana’s “Material Girl” first debuted on his 2020 album Imma Celebrity, the song took off when its chorus was made into a viral TikTok sound in late 2021. Since then, the internet’s subconscious has never been the same.

“Santana screaming ‘Material Girl’ be interrupting my internal monologue,” posted Twitter user @panthergold_. With an echo of almost 14k retweets, this is clearly a shared experience of many Internet users. The viral sound’s commanding first line — “MATERIAL GIRL!” — almost feels as though it’s being shouted through a megaphone, calling all girls with a taste for the finer things to assemble. Sounding off on the roll call, Material Girls everywhere have taken to TikTok to show off what makes them a material girl. Videos with the hashtag #materialgirl have over 1.3 billion views, while a close cousin, #materialgworl, has over 530 million.

Many TikTokers have used the sound in ways one might expect, showing off facets of their luxurious lifestyle with expensive shopping hauls or moments that could only be deemed as “extra.” (See: One user’s mother entering her 50th birthday party in a rotating dance floor elevator.)

Of course, as with anything on TikTok, the sound is as ironic as it is iconic, from TikTokers using a glamorous glass slipper filter on their thumb, to a yassified Spiderman at the movie theatre, and completely nonsensical flexes like getting a water at McDonald’s.

The sound itself has gone through a few renditions, too. The most popular sound associated with the trend is actually a bass-boosted version of the chorus “Material Girl.” There’s also a popular sped up version of the sound that gives an extra chaotic feeling to the confident anthem. There’s even a custom effect titled “MATERIAL GWOOORL,” where a filter replaces people in a video with a Lego-esque figure of a girl in a pink dress and bow. (Who is, presumably, a certified material girl.)

The leader behind the movement, Saucy Santana himself, has signed off on the Material Girl trend, sharing his own “Material Girl”-inspired TikToks and posting comments like “Material gworlllll” on popular videos.

“When he Ubers you a Toyota Camry instead of a Luxury Black Truck,” reads one of his most popular videos, as a designer bag-adorned Saucy Santana waves goodbye.

In a few TikToks, Saucy Santana has posted with his close friends and collaborators City Girls. In fact, before Saucy Santana got his start in rapping, he was a makeup artist for the popular group. Now, they’re featured in Saucy Santana’s tracks like Shisha.

In November 2021, Saucy Santana even gave a shout out to the original material girl, Madonna, with a lip-syncing TikTok dressed to the nines.

Much like the “gorgeous gorgeous girl” trend on TikTok, the Material Girl trend is as hilarious as it is empowering. Back in 2020, when the song first debuted, PAPER Magazine wrote that the anthem “suggests that anyone, regardless of gender identity, can be a ‘Material Girl.’”

“I want to show everybody that they can be how they want to be,” Saucy Santana told Billboard of the song’s release. “People respect you more.”

So, whatever being a material girl means to you, this viral sound is the perfect anthem for embracing who you are — and showing it off.

More like this
Ashamed Of Your Screen Time Stats? Here's How To Change That
By Alexis Morillo
Learning To Love, Not Judge, The Lunchbox Wives Of TikTok
By Esther Zuckerman
11 Super Bowl Instagram Captions To Use On Game Day — Even If You Don’t Like Sports
By Alexis Morillo
Here’s What TikTok's "Mascara” Trend Is *Really* About
By El Hunt
Get Even More From Bustle — Sign Up For The Newsletter
From hair trends to relationship advice, our daily newsletter has everything you need to sound like a person who’s on TikTok, even if you aren’t.