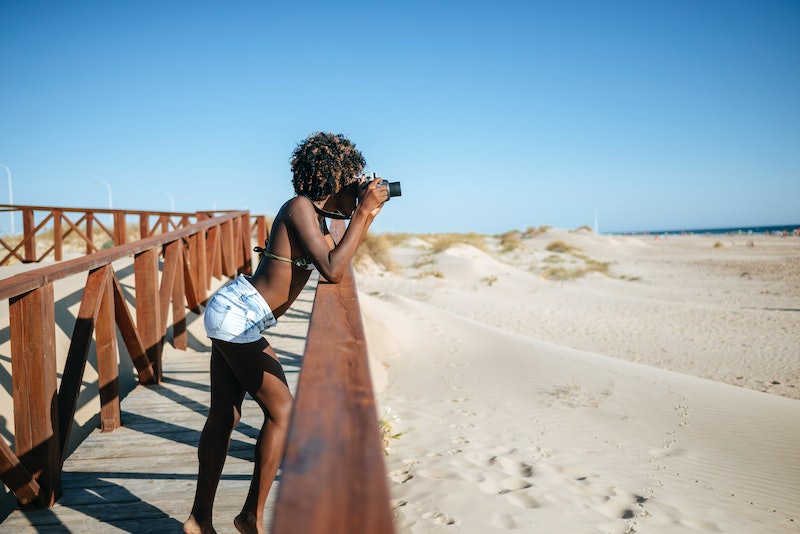 Influencing has only recently been recognised as a “real job”. Just two years ago, in 2018, the Advertising Standards Authority first issued guidance for online content creators on making clear that ads are ads, but the industry is still very tight-lipped when it comes to how much influencers are being paid. Yes, we know that A-listers can earn hundreds of thousands for just one post – it has been reported that Kylie Jenner earns almost $1 million per post, according to the 2020 Instagram Rich List compiled by Hopper HQ (an automated Instagram scheduler). But how does that filter down to the far less famous influencers? We meet the woman who’s disrupting the industry to expose the influencer pay gap.

For the majority of influencers who aren’t up there with the Kardashians et al, it’s a guessing game when negotiating pay with a brand. In some cases, money won’t even be up for discussion, instead payment will be hashtag gifted. To encourage more transparency, London-based Adesuwa Ajayi, senior talent and partnerships lead at AGM Talent, created the Instagram page @influencerpaygap. In less that a month it has accumulated close to 30,000 followers, and posted hundreds of anonymous experiences of highest-paid gigs from within the industry.

“It’s important for the page to remain faceless, so influencers feel it’s a safe place to disclose information without being judged,” Ajayi tells us over the phone. “My aim is not to judge anyone. I want to really even out the playing field.

“I know not everyone has the luxury of a tight-knit group of influencer friends, who they can speak openly and honestly with about rates; or access to this information across different followings. What is the likelihood of you knowing what someone with 5,000 followers, or even 1 million followers, is getting paid?”

Ajayi has worked in the creative industry for eight years, and is all too familiar with how brands can lowball Black influencers in the UK. This was one of the driving forces behind setting up the account. “If I am honest, I made this page out of frustration,” she explains. “I wanted to strip everything back and put everyone in the same pool. I know Black influencers are being underpaid. I feel like there's a definite pay gap between Black and non-Black influencers.”

I wanted to strip everything back and put everyone in the same pool. I know Black influencers are being underpaid

One of the stories shared comes from a Black content creator with a TikTok following of 180,000, who was asked to make content for a brand for just £10. While another entry from a white influencer with 9,500 followers on Instagram, was offered £5,000 for paid posts. The difference is striking, notes Ajayi. “Obviously when I see someone doing really well, I get excited [for them],” she says. “But I've had people with huge followings express how they’re really disheartened with such low fees. I feel a mixture of shock and sadness.”

Ajayi has also received many messages from those who have quit influencing due to lack of payment. Yet, thanks to her page, some are considering returning as it’s given them an insight into their earning potential, she tells us.

The page launch comes in the midst of the Black Lives Matter movement, and Ajayi highlights that it’s crucial to have a diverse range of influencers represented, recognising that white allies are essential to help move towards racial equality in the industry. “So many white influencers, as well as white managers, are speaking up about earnings and experiences, which is helpful for what we are trying to achieve,” she says. “I hope it does go beyond that, you know. This needs to include advocacy from those in these rooms, calling for better representation.”

In response to those who have described the page as “disruptive”, with some calling for it to be taken down, Ajayi says: “I won’t ever pretend that it isn't [disruptive], and I don't particularly care about that.” She goes on to say that it’s important to challenge agencies and brands, especially those that would rather the page didn’t exist, and are worried about being held accountable for perpetuating the pay gap.

Ajayi assures us the public confessionals will continue. She also hopes to provide educational pieces via @influencerpaygap, to equip creators with skills to better navigate the industry in terms of pay, engagement rate, negotiating, licensing information and much more.

“This page [has been set up] to really help people,” Ajayi says. “I like the fact that there are influencers from all walks of life that are just chatting to each other. I love that vibe and want that to continue. I think that sense of community is amazing.”