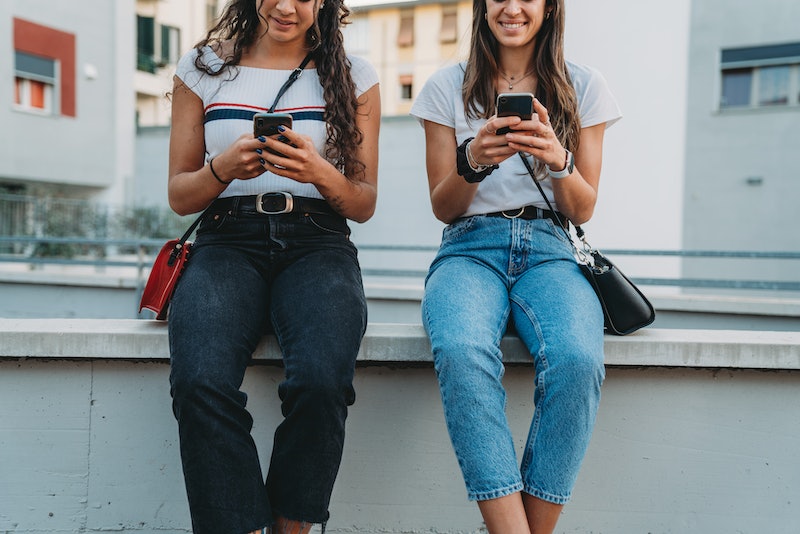 Your friend’s phone chimes in the middle of your coffee date. You ask if she needs to take the call, and she brushes it off. “It’s just Co-Star,” she says, of the astrology app that sends a daily push notification with your astrological briefing in the form of a snarky bestie text. Later, at a dinner party, you witness multiple people insisting that The Pattern app is eavesdropping on them — their daily insights were so spot-on, it’s eerie.

Both apps have developed cult followings since they both came out in 2017. Co-Star became quickly revered by hardcore horoscope hunnies for its to-the-point daily briefings that spare users sugar-coated advice, while the Pattern landed as the kind of anti-astrology app — one whose wisdom is packaged with less celestial slang and more poetic philosophy.

“It’s creepy how accurate Co-Star is with the do’s and don’ts — it’s witty and culturally on-point,” Evamaria, 32, a yoga instructor tells Bustle. “It’s kinda mean to me sometimes, but can be a good reality check,” she adds.

“I do not really believe in astrology — I never cared about my horoscope. But a friend made me download The Pattern and now I can’t stop checking it — it’s got a better read on me than my therapist,” Ashlee, 28, a makeup artist. “I’m suspicious,” she adds.

The apps are similar in that they both deliver astrological insights based on your birth chart, aka a celestial snapshot of the time you were born, but distinct in how they share that info. If your storage space is limited, and there’s only room for one astrological guide on your home screen, you’ll have to decide which astrology app is worthy of your data. Depending on what you’re open to, one might be better suited for you than the other.

“My favorite thing about Co-Star is their comparability feature — I’ve shared the app with people I’ve dated and it’s been a great way for us to connect and get to know each other better,” Leo, 21, a business student, tells Bustle. When the compatibility is positive, she says it’s “quite a turn on” and intensified the attraction. “When the results are negative it doesn’t turn people away, but instead makes them want to challenge the app to prove that it’s wrong. It’s basically a win-win situation,” she says.

Though Leo says she’s constantly ignoring notifications from other apps, she always takes the time to read Co-Star’s. “When I see a message that resonates, I explore what else the app has to say and I go from there.” Her favorite thing to check out on the home screen is the do’s and don’ts, because they make her laugh. “There’s days where some messages are stronger than others, but ultimately I do feel I can take away something from each message.” As for the daily readings, Leo compares it to a fortune cookie. “There’s some you’re like ‘eh’ and throw away and then there’s ones you store and keep.” Ultimately, she says she doesn’t rely on the app for guidance as much as she does for entertainment and curiosity.

“I’m just starting to kind of get into astrology and I was recommended The Pattern by other friends who use it,” Aiden, 24, a behavioral technician, tells Bustle. “I really love the Run Bond feature, which I use to compare my friendships,” she says. “It’s scary accurate and it’s making me a believer — I think the fact that it showed how different each of my friendships are and also the similarities which are why we work so well surprised me the most,” she adds. The app, Aiden explains, has helped her to find the words to explain why she gets along with certain people, or has tension with others.

As for the daily readings, Aiden says she’s shook by how specific they are. “I know it sounds corny, but I’ve learned a lot from the app about myself and it’s provided a new perspective, especially on why certain relationships didn’t work out.

Differences Between The Pattern & Co-Star

According to astrologer Lisa Stardust, author of Saturn Return Survival Guide, the biggest difference between the apps is that Co-Star uses more astrological terminology and references, while The Pattern is more philosophical. “Co-Star is written in a more technical way, which makes it ideal for those who know a little or a lot about astrology and want to learn more,” Stardust says. If you’re super into signs and houses, you’ll like Co-Star because you can “share your passion of astrology with friends and to forge a connection with peers, as they can share their horoscopes and their comparability,” Stardust adds.

The Pattern, on the other hand, doesn’t assume its users are well-versed in astrology jargon. “The Pattern is better for people who are new to astrology and not looking for an in-depth overview of what each transit means,” Stardust says. “The Pattern dives into overall life lessons and discusses the birth chart on a grassroots level,” she adds.

From a user perspective, Co-Star is known for its artful interface, its elite text, and social relevance. “The Pattern is not as pretty as Co-Star,” Ashlee tells Bustle. “But I spend more time on The Pattern and actually talk to people on the app — it feels more anonymous because it’s less trendy,” she says.

“I like that Co-Star gives cosmic temperature reports and that The Pattern allows its users to connect with each other by asking a question of the day,” Stardust says. “But neither one of them has a professional-grade astrology wheel with birth charts.”

How To Use Co-Star

Using data from NASA and AI, Co-Star looks at where all of the planets were when you were born and uses that information to create an astrological profile for you. From there, the app will send you daily notifications that you can see without opening the app.

After downloading the app, enter your birth time, date, and location, when prompted and complete your set up by linking your phone number and verifying with an SMS code, or by linking your Facebook account. You can add friends now or later to learn more about why and how you vibe.

When you visit the app, you’ll be greeted with some astrologically driven guidance, like “trust your emotions, even if they don’t feel logical.” You’ll also see a little list of do’s and don’t’s, like “do read a novella” and “don’t humblebrag.” You’ll find an ice breaker and suggestions of which of your contacts to reach out to, based on what’s happening in their birth charts.

Under the Updates tab, you’ll see a daily brief which highlights where you’re currently powerful, like in your social life or self, and where you’re having trouble, like with creativity or routine. You can check out your chart on the upper left corner at any time, in either table or circle form, and find an explainer at the bottom of the page if those visuals make no sense to you.

Co-Star is free to download from the App Store and Google Play.

How To Use The Pattern

After downloading the app, enter your birth time, date, and location when prompted. Once your Pattern is calculated, you’ll find a personalized astrological breakdown on your homepage, categorized into: instincts, growth, relationship experiences, ideal partner traits, destiny, and at work, and in the world. You can tap on any of these links to read more about yourself in a snapshot, or tap “Go Deeper” to read a more in-depth analysis of each section.

Tap “Your Timing” to read up on cycles you have coming your way, like an identity transformation lasting six months, or a new chapter lasting 20 months. You can tap to learn more about your cycle forecasts, peak dates, and an opportunity to share your experience on the subject with other users and add new friends. The Daily tab explains what you can expect over the next one to two days.

The Run Bond feature creates a compatibility analysis between you and others on the app. You can run one instantly with friends already on The Pattern, or use their public figures database to see if you’d hit it off with Joe Goldberg, er, Penn Badgley. If you’re on a date, you can create a custom profile by entering their birth information to calculate your vibes.

The Connect feature is The Pattern’s answer to Tinder for astrology fanatics. Not only can you cruise through the app’s single database for love, but also be intentional about finding particular astrologically sound matches.

The Pattern is free to download from the App Store and Google Play.