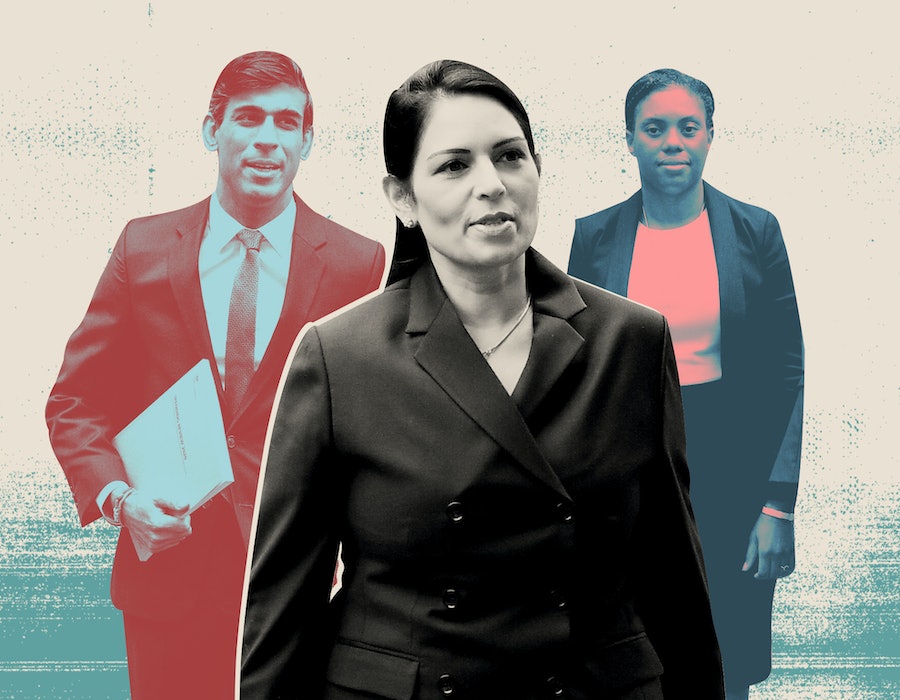 If you took a quick look at the current UK government, you would see a number of Black and brown faces, and you might possibly think that the Conservatives have nailed diversity and representation in politics. Priti Patel, a brown woman of Indian heritage, is the Home Secretary, Rishi Sunak, a brown man of South Asian heritage, is the Chancellor of the Exchequer, and Kemi Badenoch, a Black woman of Nigerian heritage, is Equalities Minister — all roles that are considered top jobs in government.

Patel has even been hailed a “GirlBoss” and a “feminist” in many women’s magazines, for managing to attain her current position of power. However, if you delved a little deeper into Patel, and the other “diverse” individuals sitting in government, you’d quickly come to realise that the beliefs they hold and policies they enforce are not serving their communities, but in fact, just harming them further. For example: Patel’s hostile immigration policies; Sunak’s attempt to cut Universal Credit amid a global pandemic; Badenoch abstaining from votes on key bills relating to same-sex marriage and abortion.

This is the crux of what representation politics is. It’s the idea that bringing different people in from different "diverse" backgrounds is enough to achieve equality and bring about change in our society. Representation in previously exclusive white male spaces does play an important part in equality and ensuring the voices of marginalised communities are heard. But it has also been co-opted by those in power to reinforce existing power structures while masking a lack of deeper progress.

Governments especially have jumped at the opportunity to use representation politics in this way, and the current UK Tory government is no exception. It’s relatively easy for the state to bring in a woman or a Black person and give them power and authority, while also maintaining the status quo. Especially when the people they’ve given access to hold similar beliefs to those already in power. The state can “tick off” their diversity and inclusion commitments through representation, while using these people as a shield to deflect from legitimate criticism for things such as racism. It’s a defence that Prime Minister Boris Johnson has called upon many times in the face of scrutiny, and Health Secretary Matt Hancock infamously used when asked why there were no Black MPs on the front bench.

"The people the government does elevate to these positions are those who tend to be considered 'model minorities.' People with palatable views that fit with the state’s narrative."

Hancock's response also shows another facet of the superficiality of this kind of representation politics — its tendency to treat "diverse" individuals and communities as a monolith. As if everyone who is not white or male is part of one large group and shares the same experiences. When asked about a lack of front bench Black MPs, Hancock instead referred to brown MPs such as Patel and Sunak as evidence of the Conservative Party's commitment to diversity. If those in power can’t even distinguish between different marginalised communities and identities, then how committed to change for these communities and identities can they actually be?

The people the government does elevate to these positions are those who tend to be considered “model minorities.” People with palatable views that fit with the state’s narrative. This is what representation in states and institutions comes down to — it’s either a shallow attempt or a devious political tactic that serves powerful people instead of supporting or alleviating marginalised communities. In fact, the “diverse” members of government have actually enacted extremely harmful policies that disproportionately affect Black and brown people.

Patel has worked tirelessly to embolden the Home Office’s hostile environment policies, ensuring life is as difficult as it can be for migrants. These policies include mass deportations and the increased use of detention centres. She’s also given the police significantly greater powers, and with Black and brown people disproportionately coming into contact with the police, this will inevitably impact and harm these communities.

Sunak’s policies, especially in this pandemic, may not be directly targeting Black and brown people, but they’re still causing harm. The planned cuts to Universal Credit, the upcoming end of the furlough scheme, and the lack of decent sick pay, are all likely to hit Black and brown people hardest. And this is because they’re the ones who are most likely to be living pay-check to pay-check and have jobs that can’t be done from home, and so have no choice but to continue to work, even with all the risks.

Patel has worked tirelessly to embolden the Home Office’s hostile environment policies, ensuring life is as difficult as it can be for migrants.

Badenoch is further proof of this harm. Last October, she spoke against critical race theory in Parliament, arguing that schools shouldn’t be teaching students about topics such as white privilege. She made this argument with reference to the fact she’s a Black woman, invoking identity politics to back up her point. And just recently, she launched an attack on Nadine White, a journalist who leads HuffPost’s coverage of race, merely for asking questions about the government’s vaccine video campaign. An attack that involved publicly sharing a number of screenshots of emails White had sent requesting a response, something which is very typical practice in journalism.

So, then it has to be asked, who exactly do these politicians represent? It’s certainly not a brown asylum seeker trying to navigate the Home Office’s system, and it’s certainly not a Black working class family living in poverty.

Having diverse people in positions of power is definitely a step in the right direction for achieving a truly equal society. Representation can be powerful in allowing people of all backgrounds to enter these spaces and amplify both their and their communities’ voices. But representation is also quite limited in what it can actually achieve, as a person may have a seat at the table but that table is still rigged against them. And when representation is co-opted for the gain of the state and its institutions, it seems doomed to be superficial at best and actively harmful at worst.

Instead of putting all the focus on representation in spaces occupied by white men, we should go deeper and scrutinise the structures that gave these white men the power in the first place. Analysing the systemic issues that marginalised people face in their lives, and working towards undoing these issues, is key in ensuring that we bring about real and meaningful change.