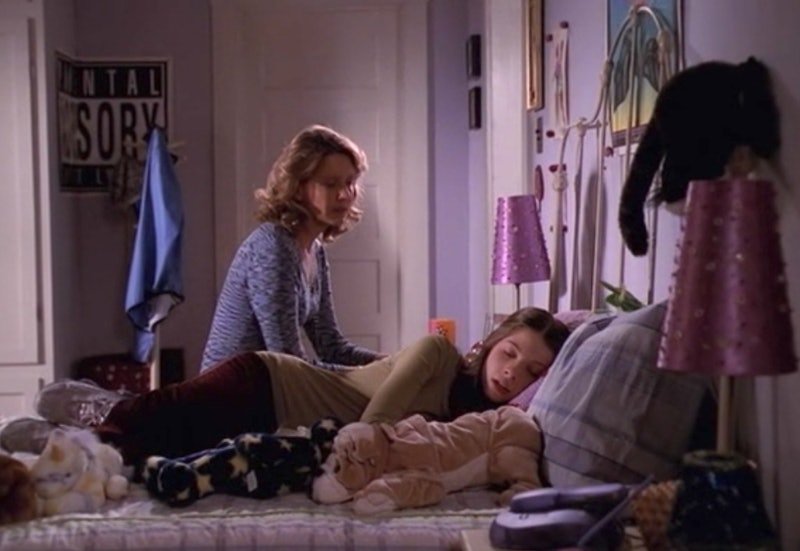 Parental advisory stickers. DSL. Begging for a bellybutton piercing. Being a '90s kid came with its own set of parent-kid relation problems, many of which kids today would hardly understand. When you tell a Gen-Z-er what it was like to be a teenager in the '90s, they either screw up their faces or tune out entirely. As it turns out, young people don't like stories that start with "Before Facebook..." or "Before iPhones..." But then again, listening to stories about how your parents had to walk 15 miles to school every day isn't that interesting either.

The unique struggles of being a child interacting with parents in the '90s inspired a generation of eye-rollers to sigh “whatever” and throw themselves on a bed surrounded by posters of Jonathan Taylor Thomas. It was a simpler time. Kids these days don't know how easy they've got it. But then again, it seems that the universal truth of every generation of children is not knowing exactly how blessed they are.

Even if they couldn’t possibly explain how big an issue it was today, ‘90s kids know the exact struggle of shared phone lines and public transit instructions. Here are 11 '90s problems you had with your parents that would make no sense today.

1. Getting Them To Pick You Up After The Movies

Remember when you went to the movies with friends, and your parents would give you 40 cents to call them from a payphone when the movie was over? Ah, the pre-cellphone era. But then, there was no telling if the traffic would be bad or they'd be slow leaving the house. So you could be waiting for a while in the meeting spot you’d determined. A while, when you're a kid, feels more like forever — especially when you don’t have an iPhone to waste time on. But if you didn't wait in the exact spot, and they tried to find you, and then you tried to find them — well, that was a special kind of sh*t show.

No child today will ever understand what it was like to argue with your parents about needing to use the phone while they were on the internet or vice-versa. This was a uniquely '90s (bleeding slightly into the early '00s) issue.

This is one for those of you who were given a face-sized Nokia for your 16th birthday for "making calls." Because people used to call. When texting became a "thing," you were charged per text message. (There was no iMessage harnessing the power of the internet to send texts essentially for free with your phone plan.) This resulted in many a parent shutting cellphone use the hell down.

A young Britney Spears might be responsible for a generation of tween girls desperately wanting bellybutton piercings. This is an ongoing fight nearly every girl in the '90s had with her parents, and one that's significantly less common now that you’re way more interested in dyeing the front parts of your hair, e-girl style.

This wasn’t just an issue with parents, but anyone you cohabited with in the '90s, so it includes your siblings. Nothing caused a blowup quite like a music or video tape that hadn't been rewound all the way after listening/viewing. Because as you'll remember, rewinding was the actual worst.

In the days before Google Maps, you fought a lot about the best way to get somewhere. If you don’t know the feeling of your parents hovering as they tell you which bus lines may or may not be in service, you grew up with a smartphone that knows the streets better than your dad.

Remember when your mom told you typing fast was the key to financial stability, and you needed to work harder on it? Well, that was before everyone became a marathon touch-typer and computers replaced most of those jobs, and then everyone had to learn to code.

These days, kids just download music or watch it on TikTok or stream it through Spotify. In the '90s, you had to put the tapes and then CDs (yes, tapes and CDs) you wanted on your Christmas wish lists. And you better believe you weren't getting any of the ones with the parental advisory warning stickers on them. And Jagged Little Pill came with a parental advisory. Thanks for nothing, Alanis.

9. The Price of Juicy Couture Sweatshirts

So your mom told you a Juicy Couture sweatshirt six sizes too small was too expensive. (Because unlike today’s Billie Eilish-inspired sweatsuits, you had to have your Juicy Couture cropped and fitted like a second skin.) And now you have to shop at Old Navy? You borrow your friend Clara’s, but it’s only four sizes too small and therefore too big. Olivia Rodrigo was right — it’s brutal out there.

Your dad probably told you no one respectable wore headphones in public at least once or twice. Well, thanks to AirPods, no one is respectable. No one.

11. Yelling at You to Carry Cash

Do you know how a lot of places don’t accept cash and only take credit cards? Twenty-five years ago, it was exactly the opposite. Every store wanted money in paper form. Like a straw, but for money.

More like this
The 'Hocus Pocus' Sequel Finally Has A Release Date & It Makes Total Sense
By Shannon Barbour and Radhika Menon
Everything To Know About 'Scream 6'
By Jack Irvin and Jake Viswanath
The 'Jurassic Park' Cast, Then & Now
By Arya Roshanian
Alicia Silverstone Has Recreated An Iconic 'Clueless' Scene
By Frances Stewart
Get Even More From Bustle — Sign Up For The Newsletter

This article was originally published on November 19, 2015