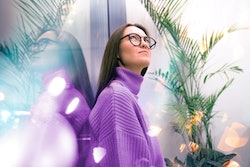 Pisces zodiac signs have an earned reputation of being emotional, intuitive, and deeply attracted to all things mystical. These daydreaming creators have a knack for creating dreamscapes out of the mundane, so if you feel your head is in the clouds or you’re having vivid dreams, you probably have Pisces season, which falls between February 19 and March 20, to thank. These zodiac signs are imaginative and romantic, and we can take notes by following along with their whimsical ideas.

As the mutable water signs of the zodiac, Pisces zodiac signs are adaptable and highly connected to their emotions. Mutable signs graciously grapple with the unpredictability of life, and Pisces are can easily adapt and transform to any random whim that comes their way. As water signs, they have a keen sense of their emotions along with the feelings of others, making them empaths by nature. They’re the ultimate dreamers whose reveries can add magic to ordinary situations — for a Pisces, no goal or ambition is too big or unattainable.

Just as every zodiac sign has a flipside, Pisceans aren’t exempt from having a few shadow qualities themselves. In fact, the fact they’re ruled by the twelfth house of the subconscious, which is often dubbed the house of the shadow self. Naturally, this disconnects Pisceans from earthly matters as they lose themselves in the supernatural. This ties into their ruling planet, Neptune, which governs dreams, illusions, and spirituality, allowing them to easily get caught up in a trance.

Having Pisces placements in your birth chart is nothing short of magical, but you don’t have to be a Pisces to appreciate their creative fantasies. Here are 25 quotes that personify these daydreaming mystics.